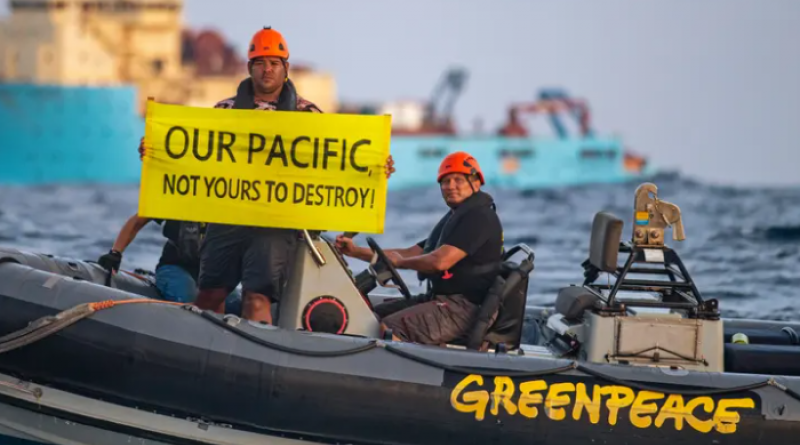 Deep sea mining firms claim their rare metals are necessary to power clean tech – but with even major electric car firms now backing a moratorium, critics say there is an alternative.

At the Goodwood festival of speed near Chichester, the crowds gathered at the hill-climb circuit to watch the world’s fastest cars roar past, as they do every year. But not far from the high-octane action, there was a new, and quieter, attraction: a display of the latest electric vehicles, from the £28,000 Mini Electric to the £2m Lotus Evija hypercar. Even here, at one of the biggest events in Britain’s petrolhead calendar, it’s clear the days of the internal combustion engine are numbered.

As countries strive to meet stringent carbon-emission targets, and vehicle-makers phase out combustion engines, 145m electric vehicles are predicted to be on the roads within a decade, up from 11m last year. The car batteries they require, along with storage batteries for solar and wind power, have sent demand for metals soaring, taking mining firms to the bottom of the sea in the hunt for those metals.

Thousands of metres below the ocean’s surface lie millions of potato-sized rocks known as nodules: a rich source of nickel, copper, manganese and cobalt. In June, an application was filed to start mining these deposits in two years’ time. As well as the demand for minerals for smartphones and other electronic devices, and the difficulty of extracting them from the land in a sustainable way, the companies behind deep-sea mining say we have no choice: if we want to make the transition to renewable energy, we must plumb the ocean depths.

“We now have the technology available to us to explore more of the ocean in the next 10 years than we have had in the last 10,000,” says Oliver Steeds, founder and chief executive of Nekton, a deep-sea research foundation and a participant at Goodwood’s Future Lab. His team uses technology such as autonomous underwater vehicles, or robots, to map the deep sea – not for mining, but to promote ocean conservation. Nekton led a deep-sea mission to the Indian Ocean in 2019, which broadcast live from a submersible 200 metres below the waves.

The advances in mining and exploration technology represent “an extraordinary opportunity for progress”, Steeds says. “But also it represents a threat, whether through deep-sea mining or further industrialisation and overfishing.

“Too often, the ocean is out of sight, out of mind. But we need to discover what’s there before we destroy it.”

More than 90% of the estimated 2.2 million species in the ocean remain undescribed. And the two-year countdown to deep-sea mining has prompted warnings from scientists that we have not sufficiently understood its potential impact on biodiversity and ecosystems.

Douglas McCauley, a professor at the University of California, Santa Barbara and director of the Benioff Ocean Initiative, says the potential impact of deep-sea mining keeps him up at night.

Electrification of vehicle fleets is a “positive pathway” to reduce carbon emissions, says McCauley. But he accuses deep-sea mining companies of a “false narrative” that we must mine the ocean to meet renewable energy’s demand for metals.

“There are some very significant questions being raised by scientists about the impacts of ocean mining,” he says. “How much extinction could be generated? How long will it take these extremely low-resilience systems to recover? What impact will it have on the ocean’s capacity to capture carbon?”

Campaigners highlight the uncertainty in assumptions behind often wildly different projected metal demand. In July, Greenpeace researchers showed many projections for metal demand by 2050 assumed ongoing use of cobalt and nickel-dependent lithium-ion batteries for electric vehicles and storage, despite alternatives being developed, including Tesla’s use of lithium iron phosphate batteries, which require neither metal.

Kevin Bridgen, senior scientist for Greenpeace Research Laboratories, says: “People are saying ‘we are not going to have enough metals if we carry on doing as we’ve always done’, but changes are already taking place.”

Increasingly, car companies are joining in the revolt. In March, BMW and Volvo, with Google and Samsung, became the first global companies to sign up to the World Wildlife Fund’s (WWF) call for a moratorium on deep-sea mining. In backing the call, WWF says, the companies committed to not sourcing any metals from the seabed, to exclude them from their supply chains and not to finance deep-sea mining, until the risks are better understood and the alternatives exhausted.

In calling for a ban, Claudia Becker, BMW’s expert in sustainable supply-chain management, says she fears mining the deep sea could have “irreversible consequences”.

“We came to the conclusion we are missing an understanding of the biodiversity impacts of deep-sea mining. We wanted to send a clear signal to the industry that until these issues are resolved, minerals from the deep seabed are not an option for us.”

One of several alternatives being explored is to build batteries using widely available metals, instead of the rare and expensive minerals used today.

Becker believes mining the seabed could be avoided by turning to alternative, less damaging metals, or by designing batteries that require fewer minerals. She cites China-based BYD (Build Your Dreams), the world’s second-largest electric vehicle manufacturer, which announced this year it would no longer use cobalt in batteries.

Claes Eliasson, senior vice-president of media relations at Volvo, says that its AB Volvo division – which makes lorries, buses and construction equipment – is betting on three vehicle types: electric, hydrogen and biofuels. It is collaborating with Daimler Trucks to produce hydrogen fuel cells for long-haul vehicles.

There are also growing calls for better recycling – including taking old batteries from rubbish dumps. “We are accumulating metal-rich lithium-iron batteries,” McCauley says of these waste sites. He is optimistic about recycling, seeing “exciting developments” in recovering minerals from batteries, and because he believes there is a “huge amount of money to be made” from pioneering a cheaper, energy-dense battery.

Researchers are tackling how to recycle the millions of electric vehicle batteries manufacturers expect to produce over the coming decades. Electric vehicle (EV) batteries are not designed for recycling, says Andy Abbott, professor of physical chemistry at Leicester University. “Most EV batteries have very small cells, which are put into modules and the modules put into packs. To give an idea, the Tesla Model S has got 4,600 cells in it,” he points out.

The difficulty, he says, is to find a cost-effective way to separate the cells, which are held together with tough and highly toxic glue, to access the metals inside.

“Some people are suggesting glue-less cells and making disassembly easier,” says Abbott. “We’re looking at using robots that can pull apart batteries. We’ve shown that, economically, it’s better if you can disassemble it.”

Product design and “planned obsolescence” is another major hurdle for metal recycling. In 2019, 53.6m tonnes of electronic waste was generated globally, only 17.4%, or 9.3m, of which was recycled. But this too is set to change, with the International Telecommunication Union setting a target of 30% recycling by 2030.)

In 2018, China began to hold vehicle manufacturers responsible for ensuring that batteries are recycled and the country now recycles more lithium-ion batteries than the rest of the world combined. Last year, BYD launched the blade battery, which stores flat cells directly inside, allowing them to be removed by hand.

Abbott predicts lithium-iron batteries will be recycled more efficiently in the next “10 to 15 years”. But he adds that they almost certainly will not be the main technology in 20 to 30 years’ time. “It’s an evolving market,” he says.

The Metals Company, formerly DeepGreen, one of several companies planning to mine nodules in the Pacific, has accused BMW, Volvo and the other companies of “irresponsible” claims. In a statement in March it asked: “Where exactly will BMW get the battery metals it needs to fully electrify its products, and with what impact to our climate?”

But its claim that mining metals from the ocean had the “least planetary impact” has been called into question.

In July, the Deep Sea Conservation Coalition, Greenpeace USA and Global Witness sent a letter to the US Securities and Exchange Commission, questioning DeepGreen’s environmental impact and feasibility statement.

“DeepGreen is offering a false or dystopian choice” between destroying the rainforest or the ocean environment, says Matthew Gianni, co-founder of the Deep Sea Conservation Coalition. “We don’t need to do either. We, as a society – whether consumers, private companies and/or, in particular, governments investing in renewable energy technologies – can and should use substitute materials and metals in the construction of electric batteries for vehicles and other energy storage technologies.”

It is not just activists who are concerned. BMW’s Becker says that at least mines on land, although often beset by allegations of child labour, deforestation and pollution, can at least be inspected and held to account.

“I’m not saying that every mine in the world is perfect,” says Becker. “But we have tools, like due diligence standards, that we can apply to mines operating under these standards and we can improve them.”

“Looking at the machinery involved in deep-sea mining, it has hardly been tested at all, smaller versions maybe. But without testing, how do we trust these methods?”

Eliasson, at Volvo, says: “If all the specialists were telling us deep-sea mining is a simple easy option with no impacts on biodiversity, we would have no problem with it. But to date, the research is not there.

“Deep-sea mining in a very sensitive environment is not a good idea until science has come up with a good way to do it. We’re not there yet.”

McCauley agrees. “We have an exciting opportunity, and obligation, to harness the full power of science and human ingenuity to accelerate the mass production of electric vehicles in a way that doesn’t create a new environmental disaster in our ocean, and that minimises the impacts of mining on land.”

TMC were approached for comment but did not respond.

Mining in the Pacific: a blessing and a curse