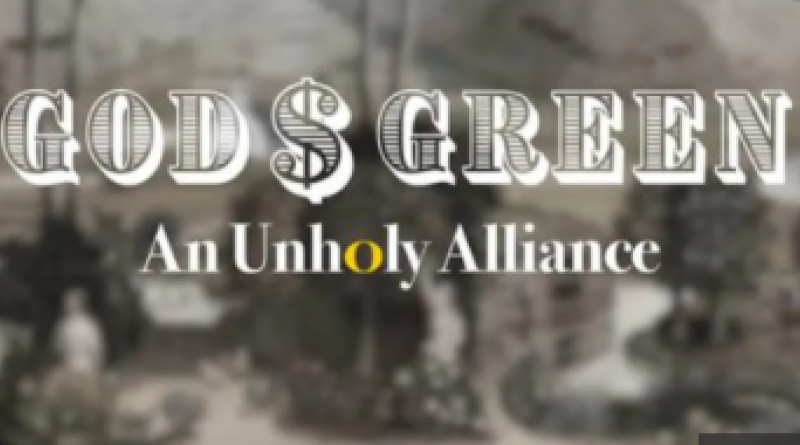 A story "about today. That started yesterday. And impacts tomorrow."

The video addresses decades of what it calls "religious polarization, political propaganda, corporate deal-making, and environmental injustice based on systemic racism."

They're talking climate change here, "the biggest crisis facing us today." And they don't pull punches, as in addressing the joining of "potent forces [that] came together to mount an army of climate change skeptics in the name of God, country, and capitalism."

The "unholy alliance" terminology comes from the mouth of former conservative Republican U.S. Representative Bob Inglis, who from 1993 to 1998, and then again from 2005 to 2011, represented a conservative South Carolina district. Inglis says his support for taking action on climate change was the principal reason he lost his seat in a June 2010 Republican primary. He now heads the Energy & Enterprise Institute at George Mason University, where he champions free-market approaches to addressing climate change.

In what's become part of the video's title, Inglis points to an "unholy alliance" that formed between the leaders of what passed as the Moral Majority, let's say, and some people with some very specific economic interests when it comes to climate change.

"When you allow your faith to be used by people with economic interests, wow, does it get corrupted pretty quickly," Inglis says in the video.

Also featuring Richard Cizik, president of the New Evangelical Partnership for the Common Good, and others dealing with religion, culture, and the environment, the well-produced and visually stunning video tracks early "big oil" money through four generations of the Rockefellers to the riches of Standard Oil, Union Oil, and the J. Howard Pugh oil riches of the 1970s and 1980s and their support for what are referred to as "religious right causes."

Religious and Africana studies associate professor Anthea Butler of the University of Pennsylvania sums things up as follows: "Evangelicals are very effective in changing the dial politically because they were very media-savvy. They knew how to grab a headline. They had networks. There was also oil money being put into some of these organizations."

Inglis agrees, saying "it just became a tribally marked thing that, you know, liberals are for action on climate. We conservatives, we don't talk about that." Inglis says that early in his career in the House of Representatives, "I didn't know anything about it except that Al Gore was for it. … that was the end of the inquiry for me." But then, prodded by his son, he traveled to Antarctica and to the Great Barrier Reef and found climate denial "no longer an option," as the narrator puts it. His awakening to climate change concerns led to his primary defeat: "a rather spectacular face-plant in politics," he calls that shellacking.

Climate Explained: What Caused Major Climate Change in the Past?

When climate change and other emergencies threaten where we live, how will we manage our retreat?