‘Everything is on fire’: Siberia hit by unprecedented burning 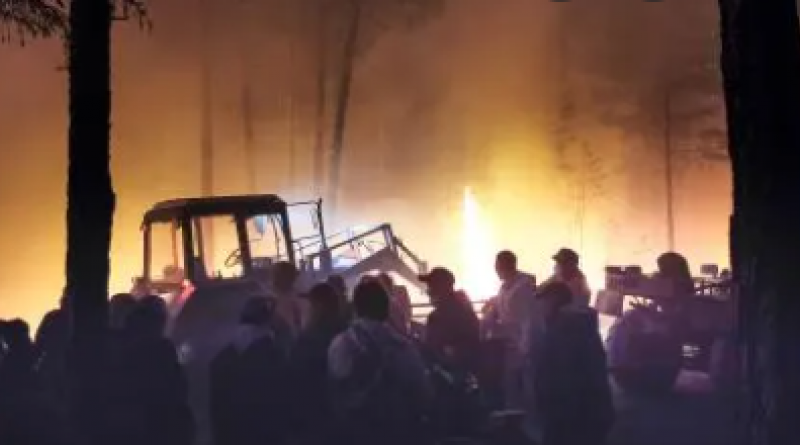 Every morning and evening for the last few days, shifts of young villagers have headed out into the taiga forest around Teryut with a seemingly impossible task: to quell the raging fires that have burned closer and closer for a month, shrouding this remote eastern Siberian village in an acrid haze.

So far, little has worked. Amid the worst wildfire season in memory, locals have vowed to defend their village to the last, sending away small children for their protection from the smog while they stay on to fight back the flames.

“For a month already you can’t see anything through the smoke,” said Varvara, a 63-year-old pensioner from Teryut, a village in the Oymyakonsky district. “We have already sent the small children away. And the fires are very close, just 2km [1.2 miles] from our village.”

The extraordinary forest fires, which have already burned through 1.5m hectares (3.7m acres) of land in north-east Siberia have released choking smog across Russia’s Yakutia region, where officials have described this summer’s weather as the driest in the past 150 years. And that follows five years of hot summers, which have, according to villagers, turned the surrounding forests and fields into a tinderbox.

Varvara said their main hope was that this week brought heavy rains to their region, which is located more than 400 miles from the city of Yakutsk across mostly impassable taiga, or snow forest.

“Emergency workers have come and villagers are also fighting the fires but they can’t put them out, they can’t stop them,” she said by telephone. “Everything is on fire.”

More than 50 settlements have been covered in smog, which has periodically halted operations at Yakutia’s main airport and disrupted river traffic.

The unprecedented scale of the fires has prompted locals to join auxiliary fire brigades.

“These are our homes, our forests, and our people,” said Ivan Nikiforov, a resident of Yakutsk, the capital of Yakutia, who has joined a volunteer fire brigade for the first time this year. “Our relatives are breathing smog. I couldn’t stand by.”

“It’s a thick smoke, yellow,” said Nikiforov, describing the fires near Magaras, a village about 100km from the capital Yakutsk. “I don’t know how the locals could stand it. It will probably have health effects for them in the future. People are both depressed and angry. This situation should not have been allowed to take place.”

Grigory Mochkin, who runs several Crossfit gyms in Yakutsk, said he had spent the last few days volunteering to build firebreaks and helping set up controlled burns to try to stop the spread of the flames.

“The fires have touched absolutely every single person’s life in Yakutia,” said Mochkin. “The fires are very large this year. And since the smoke has gotten to Yakutsk, people are very vocal on social networks because every person’s life has been affected. In past years, the smog has covered the city for at most a day.”

The smoke has been seen as a health hazard for young children and the elderly in particular. “It’s like standing next to a campfire,” said Aytalina, a 26-year-old from Yakutsk. “This year you open a window and the stench just fills the room. People are feeling very poorly.”

The choking smog has hovered for days over the city of more than 280,000, where residents have been warned to stay at home. “The level of air pollution went down [on Monday] for three hours thanks to the wind,” Aytalina said. “We went out to the store for 15 minutes for groceries. That was our first time outside of the apartment since [Friday].”

Locals have blamed various factors for the fires, from the climate crisis to poor government preparedness, to a ban on purging dry grass, budget cuts to forestry services, alleged arsons, and, in particular, the hot summers.

“There never used to be summers with such large fires,” said Nikolai Verkhovov, a native of Srednekolymsk, a village on the River Kolyma more than 750 miles from Yakutsk. “But last year a village in my district nearly burned down.” He suggested that budget cuts to forest ranger services and corruption could play a role in the fires.

“In Yakutsk itself the fire season has been growing exponentially since 2018,” he said. “This year has been unbelievably awful. Enormous parts of the forest are on fire. It’s so smoky it is hard to breathe and your eyes tear up.”

Many of those contacted sent screenshots from IQAir, an air quality app that showed that the concentration of pollutants in the air in downtown Yakutsk was so high that it was accompanied by an icon of a man in a gas mask and the description “life-threatening”.

Some people from Yakutsk have sought to leave the region during the wildfire season or considered emigrating permanently. One young woman said that as she got off a flight to Moscow from Yakutsk, she realised that her hair and clothing stank of smoke.

Others fear for those at risk in the region.

“Here in Yakutsk I have many elderly relatives, we are all worried for them,” said Verkhovov. “Some are also sick with coronavirus. My aunt was in the hospital for a month, she finally managed to get her temperature down and then the smoke has just made it worse and slowed down her recovery.”