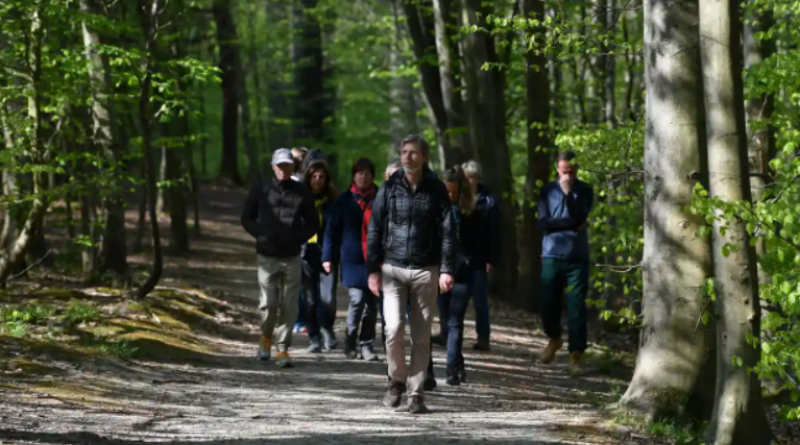 Brussels officials are being trained to meditate to help them tackle the climate crisis as part of a new wave of “applied mindfulness” that seeks to take the Buddhism-inspired practice “off the cushion” and into hard politics.

EU officials working on the 27-country bloc’s green deal climate policy are attending “inner green deal” courses intended to foster a deeper connection among decision-makers and negotiators tasked with tackling the crisis. The courses incorporate woodland walks near Brussels and meditation sessions, including one that invites participants to feel empathy for trees and animals to boost “environmental compassion”.

Some managers have reportedly shown impatience at being asked to meditate and want to “get on with business”. But early results from the first 80 participants suggest the course has strengthened officials’ motivation to tackle climate problems and overcome personal despair that little can be done.

Mindfulness has boomed in the west in recent years through courses, meditation apps and books. But it has drawn criticism that it has become a “religion of the self”, with one critic warning of “McMindfulness”. However, it is recognised by the NHS as an effective treatment for recurrent depression when delivered as mindfulness-based cognitive therapy.

Now advocates of “applied mindfulness” believe it could accelerate consensus-building between climate decision-makers. A recent report by the Intergovernmental Panel on Climate Change (IPCC) highlighted the need for “inner transitions” and the potential of meditation to encourage lower-carbon lifestyles.

Some UK MPs are backing a policy report launched this week that argues examining the human heart and mind is the “missing dimension” in the global response to the climate crisis.

The report, overseen by the Mindfulness Initiative, which supports the UK parliament’s all-party group on mindfulness, says tackling climate breakdown has too long been framed as a problem of technology rather than compassion and empathy, and this is holding back humanity’s ability to move faster.

The report argues the climate emergency is rooted in “a crisis of relationship that has us treating the world we belong to as a resource to be exploited, and the other people in it primarily as competitors”.

It calls urgently for policy attention to “the neglected inner dimension of the climate crisis” and argues for “the importance of mindfulness and compassion practices in restoring the conscious connection fundamental to human and planetary health”. Applying mindfulness, it argues, can help decision-makers mentally “stay with” the often overwhelming problem humanity is facing rather than fleeing it.

Figueres, who led the landmark 2015 Paris climate accord negotiations, told the Guardian her practice of “deep listening”, which is related to mindfulness and emerges from Buddhist teaching, was “the key” to the successful agreement.

“Had I not been practising deep listening I never would have understood where 195 countries and thousands of stakeholders were coming from,” she said. “I really wanted to know deeply what they were saying. I chalk up a lot of the Paris accord to deep listening.”

Lucas said: “Mindfulness is about making the space to feel the connections that could then inspire action. Reaching into people’s deeper empathy for the world is a way of generating the extra energy, motivation and belief that change is possible.”

She is among a group of MPs who meditate regularly together at parliament and she said the practice “keeps me on track by reminding myself, amid the noise and distraction of political life, of what’s important”.

Under the EU’s training package, officials learn mindfulness practices before being presented with raw facts about the climate emergency. They then explore how they personally relate to problems that can seem overwhelming.

Jeroen Janss, who runs the course, said strong emotions often arose, including deep sadness, frustration over lack of progress, guilt and hopelessness. Participants learn how to regulate these emotions, find their personal role and, through collaborating around concrete initiatives, come out with a sense of agency.

“They feel ‘I can do something,” said Janss. “There is less eco-anxiety.”

“There is a lot of power in even one or two people being fully present in a meeting,” said one policy officer working on EU-wide climate negotiations who has taken the course. “The inner dimension has been missing for some time and it has the potential to unlock how we collaborate.”

Climate limit of 1.5C close to being broken, scientists warn