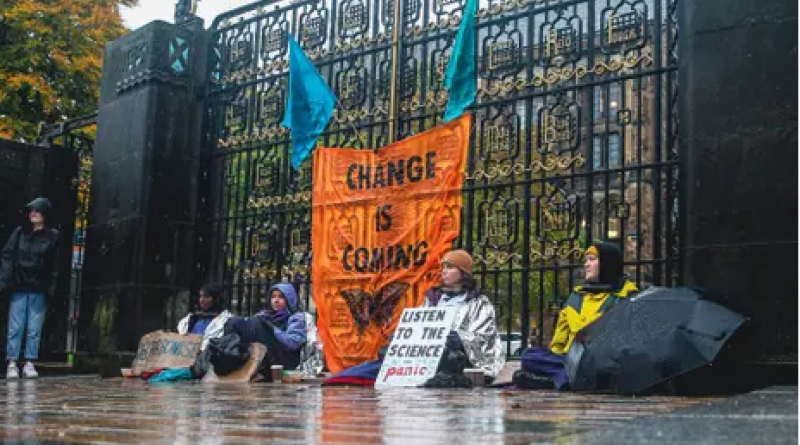 Prosecutors are under growing pressure to drop cases against environmental protesters after activists who sprayed graffiti at an office of the UK’s most prominent climate-change sceptics were handed the lightest sentences possible.

Three campaigners were found guilty of criminal damage after painting “lies, lies, lies” on the Westminster office of the Global Warming Policy Foundation. The organisation, which was once chaired by the former chancellor Nigel Lawson, has been criticised by the Charity Commission for breaking rules on impartiality, with critics accusing it of being the UK’s most prominent source of climate-change scepticism.

The campaigners received the minimal permissible sentence for criminal damage – a six-month conditional discharge – and were told to pay a reduced court cost of £100. Raj Chada, a solicitor at Hodge Jones & Allen, said the Crown Prosecution Service (CPS) ought to reevaluate pursuing such cases.

Around 50 Extinction Rebellion activists have had their convictions quashed after peaceful protests, raising questions for the CPS over cases brought against them. “Surely, yet again, the CPS needs to consider whether it is in the public interest to prosecute when these are the sentences imposed,” Chada said.

Clare Farrell, Jessica Townsend and Rupert Read sprayed the graffiti and poured fake blood down the steps of the building in September 2020. The address is home to a small but influential network of libertarian, pro-Brexit thinktanks and lobby groups. Among those who attend frequent meetings at the Georgian townhouse are pro-Brexit website Brexit Central, the TaxPayers’ Alliance (TPA) and the Institute of Economic Affairs (IEA), which has been accused of offering donors access to government ministers and civil servants.

Delivering the verdict last Thursday, three magistrates at City of London Magistrates court praised the activists for their “openness and honesty”.

Townsend said: “We feel it is an obscenity … that there are those propagating lies that will damage and put at risk the future of our society and our children.”

Townsend, an author who co-founded Writers Rebel, a group of writers within Extinction Rebellion including Mark Rylance, Zadie Smith and Juliet Stevenson, added: “Writers, journalists and all who deal with words need to counter these lies, false narratives and deliberate confusions with the clarity of the truth.”

Actress and author Harriet Walter, who was at the court in support, said: “The wrong crime was on trial. Which is the greater crime? Reversible damage to a bit of property or landing our children and grandchildren with irreversible damage to the planet?”Jonathan Porritt, former chair of Tony Blair’s Sustainable Development Commission, added: “This is a disappointing outcome … It doesn’t make the Global Policy Warming Foundation any less of a bunch of chronic liars.”

A spokesperson for the Global Warming Policy Foundation, rebranded online as the Net Zero Watch, said they were campaigning against “exaggerated” claims that were not based in science. They added that they should be called climate change sceptics, not deniers.

The spokesperson added: “No scientist in their right mind claims we’re facing extinction or we only have 10 years to prevent global catastrophe… These are exaggerated claims that Extinction Rebellion use to scare people. But, you know, we might face significant warming and significant problems. But it’s not the end of the world, is it?”