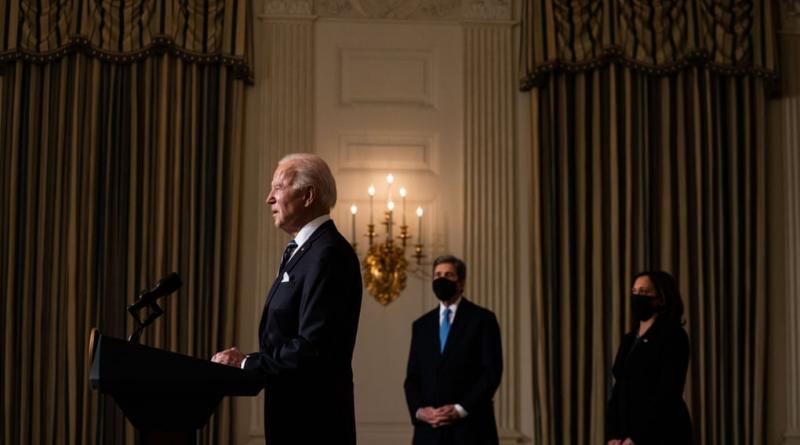 Analysis: The new president has framed the challenge of global heating as an opportunity for US jobs, saying: ‘We have to be bold’.

For a landmark moment in the global effort to stave off catastrophic climate change, Joe Biden’s “climate day” at the White House was rather low-key. The US president bumped elbows with his newly appointed climate tsar, John Kerry, who he called his “best buddy”, then gave a short speech before perfunctorily signing a small stack of executive orders, donning his mask and striding out without taking any questions.

The vision laid out in the actions signed by Biden on Wednesday, however, was transformative. A pathway for oil and gas drilling to be banned from public lands. A third of America’s land and ocean protected. The government ditching the combustion engine from its entire vehicle fleet, offering up a future where battery-powered trucks deliver America’s mail and electric tanks are operated by the US military.

Biden may eschew the politically contentious framing of the Green New Deal but there was even an echo of the original New Deal with his plan for a civilian climate corps to restore public lands and waterways. “The whole approach is classic Biden; working-class values, putting people to work,” said Tim Profeta, an environmental policy expert at Duke University.

The dizzying list of actions demonstrated the breadth and depth of the climate crisis. Biden’s administration will spur new climate-friendly policies for farmers while also devoting resources to the urban communities, typically low-income people of color, disproportionally blighted by pollution from nearby highways and power plants. In all, 21 federal agencies will be part of a new, overarching climate body. “This isn’t time for small measures,” Biden said. “We need to be bold.”

The first 10 days of Biden’s presidency have represented a startling handbrake turn from Donald Trump’s term, where climate science was routinely disparaged or sidelined and policies to cut planet-heating emissions were jettisoned. A complete rewiring of the economy is now needed to avert what the president calls an “existential threat” to civilization. US emissions dropped by about 10% last year but only because of pandemic shutdowns, and similar cuts will be required each year. “We can’t wait any longer – we see it with our own eyes, we feel it in our bones,” Biden implored.

“It truly is a new day for climate action,” said Carol Browner, former administrator of the Environmental Protection Agency under President Bill Clinton. “President Joe Biden is taking unprecedented actions and sending an unmistakable message to the world that the United States is back and serious about tackling the climate crisis.”

Biden is yanking every possible governmental lever, it seems, to lower emissions but is also cognizant of attacks from Republicans, and unease among some unions, that ditching projects such as the Keystone XL oil pipeline will kill jobs. Battle lines have already formed – Republicans are trying to prevent any halt to drilling, with Greg Abbott, the Texas governor, vowing to “protect the oil and gas industry from any type of hostile attack launched from Washington DC”.

The counter to this backlash will be framed around jobs. Those who know Biden say the president views the climate crisis as a destabilizing threat to American might and national security but also an opportunity to create employment in a Covid-ravaged economy. “When I think of climate change I think of jobs,” has become a Biden slogan.

The president argues a $2tn clean energy plan will bring millions of new jobs by refashioning the power grid to run on carbon-free sources such as solar and wind within 15 years, building a new generation of energy-efficient homes and electric cars and mopping up pollution from oil and gas wells. “People have been in pain long enough,” said Gina McCarthy, Biden’s new domestic climate adviser, in reference to the pandemic. “We are not going to ask for sacrifice. If we fail to win the heart of middle America, we will lose.”

But emissions won’t get to zero via presidential action alone and Democrats’ hopes of sweeping climate legislation appear remote in a finely balanced Senate where climate denialism is still rife, as demonstrated on Tuesday by the Republican senator Rand Paul promoting a baseless theory that global heating is caused by the Earth’s tilt rather than human activity. Joe Manchin, a key Democratic vote who represents the coal heartland of West Virginia, once shot a climate bill with a rifle in a TV campaign advertisement.

“Congress seems to be the last bastion of climate denialism left in America,” said Todd Stern, the lead US negotiator of the Paris climate agreement.

There will probably be bipartisan agreement in certain areas, such as tax breaks for wind and solar and upgrades to ageing infrastructure that is being increasingly battered by floods, storms and wildfires. Chuck Schumer, the Democratic Senate leader, is confident some climate spending can sneak into overall budget bills. Biden could do more unilaterally if he declared a state of emergency over climate, Schumer has suggested. “Trump used this emergency for a stupid wall, which wasn’t an emergency. But if there ever was an emergency, climate is one,” the New York senator said last week.

While obstacles remain in Congress, the overall landscape has shifted since Biden’s time as vice-president. Solar and wind have plummeted in cost, countries are charging ahead, however imperfectly, on cutting emissions, and even supposed climate villains are changing their tune – in just the past week BlackRock, the world’s biggest investment fund manager, threatened to sell shares in the worst corporate polluters, the US Chamber of Commerce said it would support a price on carbon, and General Motors announced it will make only zero-emissions cars from 2035 onwards.

The Trump years may well have been the death rattle of influential denialism. The American public’s concern over the climate crisis is at record levels, with even a majority of Republican voters supporting government intervention in the wake of a year of unprecedented wildfires and hurricanes that cost hundreds of lives and tens of billions of dollars. The question is now whether the US is able to change quickly enough to avert further disaster, rather than if it will change at all.

“We are already spending the money, folks,” Kerry, the former secretary of state who is now Biden’s climate envoy, said of the recent climate-fueled disasters. “It’s cheaper to deal with the crisis of climate than to ignore it. This is life or death, a challenge to the fibre of our society. The stakes on climate change couldn’t be any higher than they are now. Failure is literally not an option.”