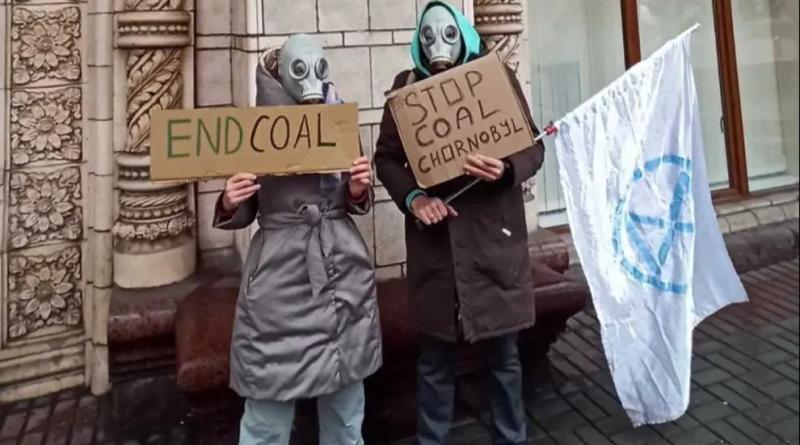 The war in Ukraine could be stopped “tomorrow” by causing disruption to Gazprom, the founder of the Ukrainian branch of Extinction Rebellion (XR) has said, calling on climate protesters worldwide to demonstrate at the Russian energy giant’s offices.

The climate activist, who wanted to go only by his first name Grisha, told The Independent it was a “problem” to be expressing solidarity with Ukraine while still funnelling money into the invading country through oil and gas imports, and said Russian fossil fuels should be “blocked”.

He is one of millions who have been displaced by the Russian invasion which started just over three weeks ago. The war has decimated several cities and is reported to have killed thousands of civilians.

Speaking to The Independent from Ukraine, Grisha said his whole country was mobilising to resist the attack. His contribution is not joining the fight on the front line, but rather stepping up the battle against fossil fuels.

“I am not an army man. I don’t know how to fight or shoot with (a) gun,” he said. “We try to focus on different things other people can do.”

The climate activist said he wanted to see more civil disobedience across Europe targeting Russian fossil fuels, which could include XR groups and other protesters rallying outside Gazprom offices and preventing people from going to work.

“We believe that if Gazprom stops today, tomorrow the war ends,” the 38-year-old said.

Gazprom, the world’s largest natural gas company by production, wields considerable influence both in Russia and beyond as it supplies around 40 per cent of Europe’s gas. Its subsidiaries have offices across the continent, including several in the UK.

Other companies have moved to distance themselves from the Russian state-owned energy firm since the war in Ukraine started, including Shell, which cut ties with Gazprom earlier this month.

In the UK, the health secretary has reportedly told hospitals to stop using gas from the energy giant. Germany blocked a new Gazprom pipeline in response to Russian aggression days before the war started.

Europe has so far stopped short of banning Russian gas imports. But the war in Ukraine has sparked even more alarm over the world’s reliance on fossil fuels.

As well as its impact on the climate crisis, world leaders have been expressing concern over how this money ends up being spent in the Russian context.

US president Joe Biden banned Russian oil and gas imports last week over the war in Ukraine, saying it would help to serve a blow to Vladimir Putin’s “war machine”.

Concerns have also been raised in the UK – where Russian oil is being phased out – that the public could inadvertently be funding the war by filling up cars or paying energy bills.

Grisha – as translated by a fellow Ukrainian XR activist, Nastya – said his group wanted to encourage the global community to protest against fossil fuels as the war wages on and had created slogans and posters for this, although it was difficult to work on activism with air raid sirens frequently going off and attacks happening in the background.

The 38-year-old XR Ukraine founder said it was important to see groups around the world helping Ukrainian refugees, but that this was only a sticking plaster.

“A lot of people in Ukraine want to stay and they don’t want to leave and they want to come back to their countries. So it’s also very important to stop the source of the issue, not the outcome,” he was translated as saying.

Svitlana Krakovska, a Ukrainian scientist involved in the most recent Intergovernmental Panel on Climate Change report, told The Guardian fossil fuels were driving both the climate crisis and the war in Ukraine.

“Burning oil, gas and coal is causing warming and impacts we need to adapt to. And Russia sells these resources and uses the money to buy weapons. Other countries are dependent upon these fossil fuels, they don’t make themselves free of them,” she said.

“This is a fossil fuel war. It’s clear we cannot continue to live this way, it will destroy our civilisation.”

The UK said last week it would no longer import Russian oil by the end of the year and was exploring options to reduce gas imports.

Meanwhile the European Union said it was planning to phase out its dependency on Russian fossil fuels by 2027.

Grisha told The Independent he thought it was “very strange” to see the EU slapping sanctions on Russia, yet still paying what he claimed was billions for Russian gas and oil since the war started.

According to a tracker run by campaign group Europe Beyond Coal, the bloc has paid Russia more than €17bn for fossil fuels since the invasion was launched on 24 February.

An EU official told The Independent it has launched an unprecedented sanctions response over the war in Ukraine and had just adopted a fourth package, which included a “far-reaching” ban on new investment on Russian energy.

“It’s working, we see the effect on the Russian economy already – the stock market is closed, the rouble has lost half of its value and companies are fleeing the country,” they said.

“Some transactions are still needed, though, to ensure the supply of certain energy products into the EU.”

Gazprom and the UK’s Department for Business, Energy and Industrial Strategy have been approached for comment.

The head of Gazprom has called on its 500,000 employees to rally around Mr Putin to preserve Russia as a great power in the face of foreign attempts to break her, according to a letter published on Thursday.