‘Decarbonising aviation’: the Electric EEL could be the future of flying 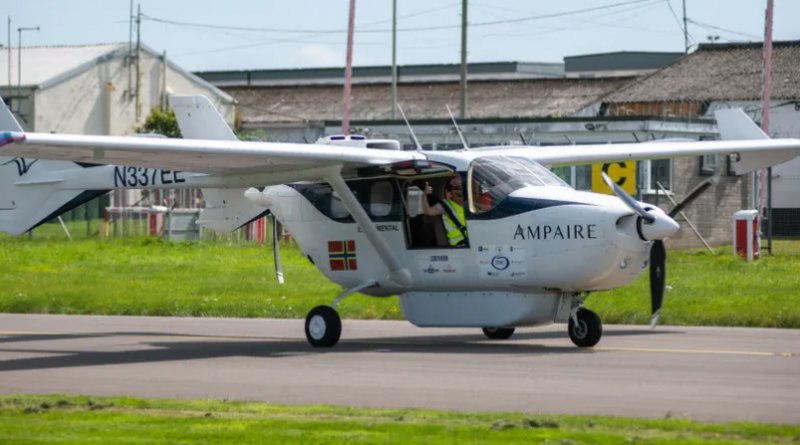 The hybrid electric plane uses batteries instead of a conventional engine, the makers argue this means it is quieter, cheaper and greener

At first glance it did not look very different from the other light aircraft dotted around Exeter airport’s runway, a chunky extra compartment bolted to the bottom of the fuselage the only hint that there was more to it than met the eye.

But the plane took off a little more steeply than might have been expected and, as it circled the airport before heading towards the moors of Devon and the coast of Cornwall, it was noticeably quieter than the norm.

This was the maiden test flight in England of the Electric EEL, a hybrid electric plane, the like of which may soon be coming to airfields across the world.

“I’m impressed,” said Chris Davey, deputy airfield operations duty manager, as he watched the plane sail away into the blue sky. “Its climb rate was good and it’s a lot quieter than a conventional plane. I guess it’s the future.”

Thirty-six minutes later, the plane touched down 80 miles away at Cornwall Airport Newquay.

It did not go as fast as the jet planes he has flown and nowhere near as high as the spacecraft he has worked on but test pilot Elliot Seguin, a relaxed Californian who flies with the figure of a guitar player on top of the instrument control panel, was clearly enjoying himself. “Oh boy, I like this plane,” he said.

Electric EEL is an adapted six-seat Cessna. There is a conventional combustion engine in the back of the plane that drives the rear propeller.

But that chunky compartment under the cabin holds six batteries – originally built for motorcycles – that power the front propeller.

The replacement of one conventional engine with the batteries makes the plane lighter – hence the steeper climb – but also, the makers argue, quieter, cheaper, greener.

Seguin said it flew very much like a conventional Cessna. “That means we can really focus on the electrical systems. We’ve got Teslas on the road, cellphones in our pockets that show this battery stuff is here. We’ve got to see if we can put batteries in an airframe and make it work.”

The plane was tested in California and Hawaii before being shipped from the Port of Long Beach to the UK. Seguin tested it in Orkney before flying down to Exeter for a champagne launch in front of two UK government ministers, aviation minister Robert Courts and the business and energy minister Lord Callanan.

It is very much a work in progress. The batteries are only used to help get the plane airborne. “We could get half an hour of juice out of them but the batteries wouldn’t be happy with that,” said Seguin.

The plane has been built by California company Ampaire, which believes hybrid, and eventually, completely electric planes may, in the not too distant future, be used for short hops – for example from Exeter to the Isles of Scilly.

Susan Ying, Ampaire’s senior vice-president, said she believed that as well as being good for the environment, hybrid planes will cut the cost of flying.

She said the cost of the hop from Exeter to Newquay in Electric EEL was 30% cheaper than in a conventional light aircraft. “And batteries are coming down in price all the time,” she said.

There are issues to tackle. Ampaire is working on improved batteries and better ways of charging. There are also doubters. 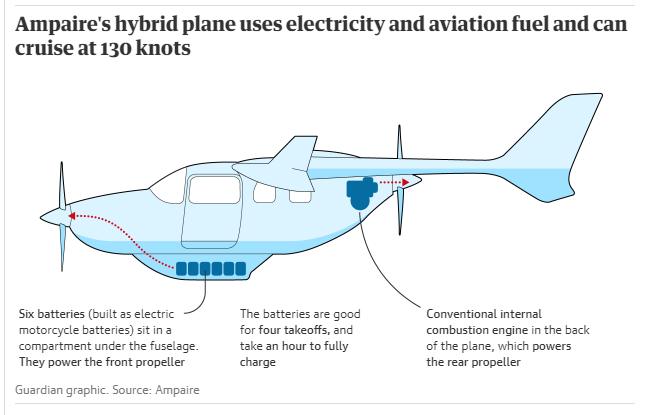