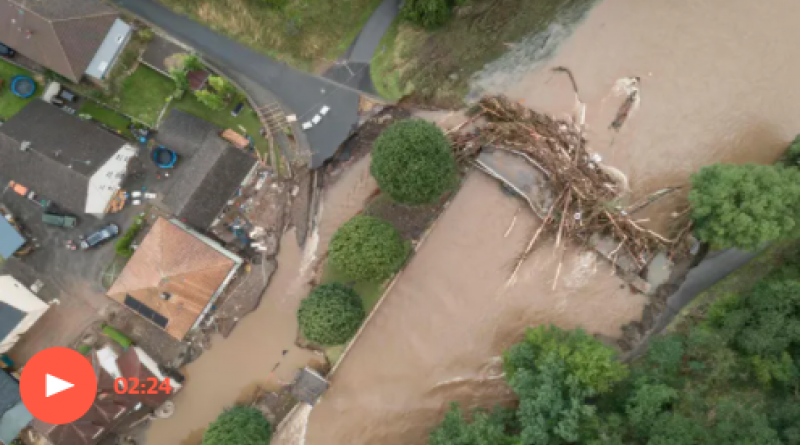 The death toll from catastrophic floods in western Germany and Belgium has risen to more than 150, local authorities have said, as emergency services continued their search for hundreds still missing.

The German president, Frank-Walter Steinmeier, said he was “stunned” by the devastation caused by the flooding and pledged support to the families of those killed and to cities and towns facing significant damage.

“In the hour of need, our country stands together,” Steinmeier said on Friday afternoon. “It’s important that we show solidarity for those from whom the flood has taken everything.”

Authorities in the German state of Rhineland-Palatinate said on Saturday morning that 93 people had died there, including at least 12 residents of an assisted living facility for people with disabilities, while neighbouring North Rhine-Westphalia put the death toll at 43.

Officials warned the figures could rise further. About 1,300 people in the Ahrweiler district of Rhineland-Palatinate remain unaccounted for, although efforts to contact them were being hindered by damage to phone networks.

Experts said the European Flood Awareness System (EFAS) issued an extreme flood warning earlier this week and questioned why the toll was so high. Hannah Cloke, a hydrologist, told Politico the disaster was “a monumental failure of the system”.

The German weather service DWD said it had passed on the warning to local authorities, who should have been responsible for organising any necessary evacuations. The interior minister, Horst Seehofer, said Germany “must prepare much better” in future, adding that “this is a consequence of climate change”. 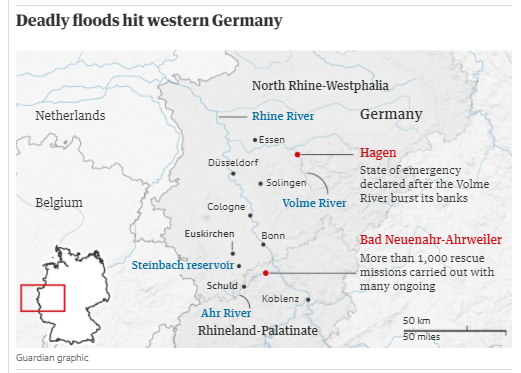 Steinmeier called for greater efforts to combat global warming. “Only if we decisively take up the fight against climate change will we be able to limit the extreme weather conditions we are now experiencing,” he said.

Experts said such disasters were likely to happen more often due to climate change. “Some parts of western Europe … received up to two months of rainfall in the space of two days,” World Meteorological Organization spokesperson Clare Nullis said.

While she said it was too soon to blame the floods and preceding heatwave on global heating, Nullis said the climate crisis was “increasing the frequency of extreme events while many single events have been shown to be made worse by global warming.”

The Belgian interior minister, Annelies Verlinden, said the country’s death toll had risen to 20, with another 20 still missing. Most of the dead were found around Liège, a city of 200,000 people, despite an order for residents of central districts and areas bordering the Meuse River to evacuate.

Verlinden said water levels on the Meuse running into the Netherlands remained critical. “There are a number of dikes on the Meuse where it is really touch and go whether they will collapse,” she said.

The army has been sent to four of the country’s 10 provinces to help with rescue operations and evacuations, along with teams of emergency workers dispatched from Italy and France. Residents of some towns, including the resort of Spa, which has been under water since late on Wednesday, were being accommodated in tents.

While they have so far suffered no loss of life, Switzerland, Luxembourg and the Netherlands were also severely affected, with flash floods sweeping through the Swiss villages of Schleitheim and Beggingen, several towns in the Grand Duchy evacuated on Thursday, and thousands told to leave their homes in the southern Dutch city of Maastricht.

The water level in the Maas, as the Meuse is known in Dutch, reached its maximum forecast height in Maastricht on Thursday night but stayed below what authorities had termed the “doom scenario”, averting widespread flooding.

At least 550 households were evacuated in Roermond, while authorities in Venlo evacuated about 200 hospital patients due to the looming threat of flooding from the river. The caretaker prime minister, Mark Rutte, formally declared a disaster, freeing up state funds to pay for the damage.

By far the highest death toll was in Germany, where 114,000 households were without power and rescuers on Friday were focusing their efforts on helping people trapped in their homes in the town of Erftstadt, south-west of Cologne.

Regional authorities said several people had died or been reported missing after their houses collapsed when the ground beneath them sank suddenly in a major landslide. Aerial photos showed what appeared to be a massive sinkhole. 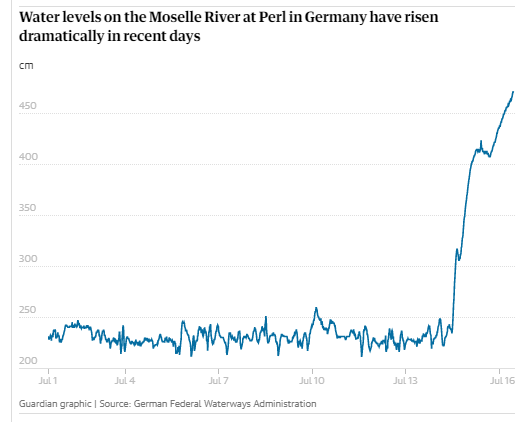 “We managed to get 50 people out of their houses last night,” Frank Rock, a local official, said. “We know of 15 people who still need to be rescued … One has to assume that, under the circumstances, some people didn’t manage to escape.”

Roads around Erftstadt were impassable, with rescue crews trying to reach residents by boat and having to rely on walkie-talkies to communicate. “The mobile network has collapsed. The infrastructure has collapsed. Hospitals can’t take anyone in. Nursing homes had to be evacuated,” a regional government spokesperson in Cologne said.

More rain was forecast for parts of the region, where water levels in the Rhine and its tributaries continued to rise. Nearly 1,000 soldiers have been deployed to help with rescue operations and rubble-clearing in affected towns and villages.

At least 24 people were confirmed dead in Euskirchen, one of the worst-hit towns. Reporters on the scene described a normally well-ordered centre transformed into a mountain of rubble and house fronts ripped off by the floods.

Thousands of people remain homeless after their houses were destroyed or deemed at-risk by authorities, including several villages around the Steinbach reservoir that experts say could collapse under the weight of the floods.

“I fear that we will only see the full extent of the disaster in the coming days,” the German chancellor, Angela Merkel, said late on Thursday in Washington, where she is visiting Joe Biden, calling it a day “characterised by fear, despair, suffering”.

She said her government would not leave those affected “alone with their suffering,” adding that it was doing its “utmost to help them in their distress”.

The conservative governor of North Rhine-Westphalia, Armin Laschet, who is running to succeed Merkel as chancellor in elections due in September, called an emergency cabinet meeting for Friday.

“It is a reality that extreme weather events will influence our everyday life more strongly in the future,” Laschet said, adding: “We have to continue down Germany’s path towards climate neutrality at a faster pace.”

But he also said that the problems caused by the climate crisis “cannot be solved in North-Rhine Westphalia, or Germany”. Malu Dreyer, the governor of Rhineland-Palatinate, said climate change was “not abstract any more. We are experiencing it up close and painfully.”

From floods and fires to locusts, 'climate breakdown' cost rich and poor in 2020.