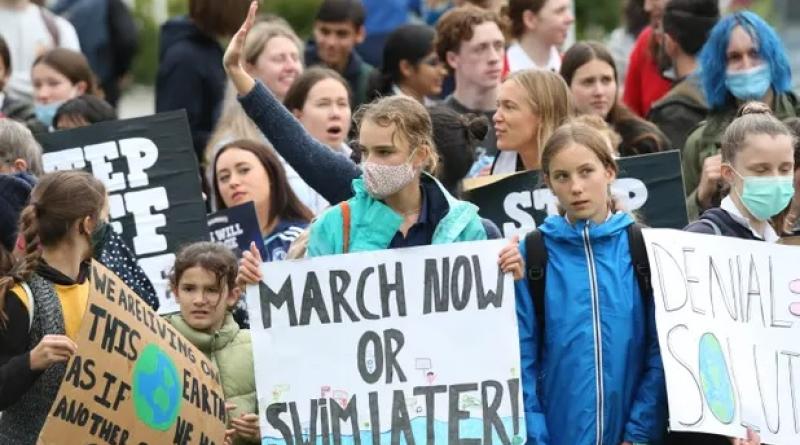 For the last few months, children such as myself have only had to turn on our TVs to see images of people stranded on their roofs hoping to be rescued by the State Emergency Service. Opening the Instagram app reveals how the Great Barrier Reef has just suffered its sixth mass coral bleaching. And “once in a hundred year” floods seem to happen just a bit too often.

For some of us, it hits home on a personal level too.

My home country and place of birth, India, is in a severe and brutal heatwave. It’s become ingrained into my morning routine to wake up and check the headlines: people struggling to breathe, wheat yields under pressure, deaths from heatstroke. Checking in with family and loved ones, praying that they’re OK.

Pre-monsoon, the country is reporting temperatures of upwards of 45C day after day. This is unsurvivable as it stands, and given that much of India only experiences its hottest temperatures mid-May to June, it’s only set to get worse.

This is what we see when we look at the present. It’s excruciatingly painful, then, to picture the future that we’re expected to build our lives in.

What is the correct emotion to feel when we see this news? Is it gratitude for those of us who have not yet found ourselves in such life threatening situations, underscored by dread that soon we may be the people we have watched on TV with distress, being rescued?

Is it survivor’s guilt, for this very reason?

This rings true for me, having migrated to Australia at such a young age. While my family swelters through an unbearable heatwave, I’m left unscathed.

Is it hope for the upcoming election, a chance that things might change, or anger that all we’ve seen thus far is both major parties frothing at the mouth at the supposed economic opportunity in backing fossil fuels, turning a blind eye to the humanitarian cost, as well as the many well-documented benefits of shifting to a clean economy? Anger that both major parties are taking emissions reductions targets to the election that are well below what leading scientists have indicated is needed to avoid climate catastrophe?

Anger that some MPs feel the need to belittle those of us worried about our future, telling us to go back to school and become climate scientists or do something useful?

At least, this is the opinion of Liberal candidate for Macnamara, Colleen Harkin, when, on Sunday at the Macnamara candidates debate, I asked all candidates if they believed that the federal environment minister owed a duty of care to young people to protect us from climate change.

A simple no would have sufficed.

Instead, she said: “We all want a clean environment – we all want that. But to teach children that there is an emergency is nothing short of almost abuse … We have eight-year-old children who are stressed about the environment. We’ve taught them to be stressed.”

To conflate the pressing issue of child abuse with the equally pressing issue of climate change and climate anxiety is to belittle both. On Tuesday, Harkin said in a written statement: “I accept my language was clumsy; the point I was seeking to make was that we should be teaching our children hope, not fear.”

Nobody has abused or fear-mongered this into us.

We’re children who have read the news, who have seen climate impacts devastate their families and friends. We’ve read the science. As Intergovernmental Panel on Climate Change co chair Hans-Otto Pörtner put it, “any further delay in concerted global action will miss a brief and rapidly closing window to secure a liveable future.” That’s a future that we’ll be living in.

Polls by the ABC’s Vote Compass and the Daily Aus showed that climate change is the most prevalent issue on the minds of voters. And yet, with 114 new fossil fuel projects in the pipeline, and a two-party system with deeply ingrained ties to big coal and gas, what our major parties are promising is the exact opposite.

I’m a first-time voter. I’ll be voting for the climate, as will hundreds of thousands of young people like myself. The ball is in the court of both major parties. Show us you won’t be putting profit over people’s lives. We’re waiting.

cover photo: ‘We’re children who have read the news, who have seen climate impacts devastate their families and friends. We’ve read the science.’ Photograph: Richard Milnes/REX/Shutterstock