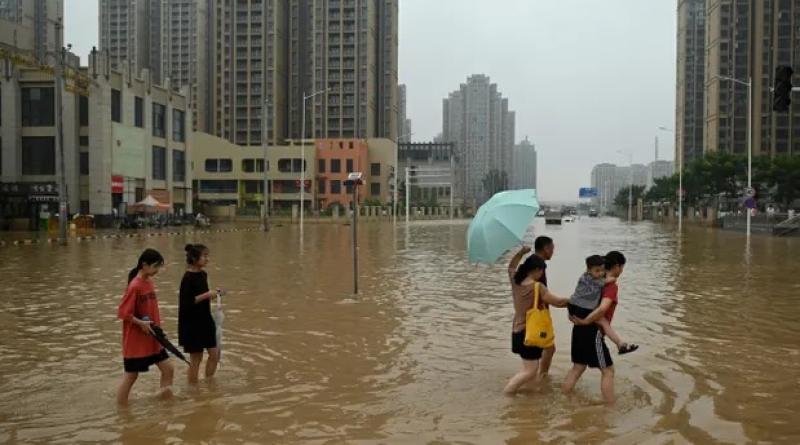 Critical global indicators of the climate crisis broke records in 2021, according to a UN report, from rising oceans to the levels of heat-trapping emissions in the atmosphere.

The UN World Meteorological Organization (WMO) said these were clear signs of humanity’s impact on the planet, which was bringing long-lasting effects. Extreme weather, which the WMO called the day-to-day face of the climate emergency, wreaked a heavy toll on human lives and led to hundreds of billions of dollars in damages, the agency said.

Droughts and floods triggered food price rises that have been exacerbated in 2022. The WMO’s State of the Global Climate in 2021 report also found the past seven years have been the hottest recorded.

“Today’s State of the Climate report is a dismal litany of humanity’s failure to tackle climate disruption. Fossil fuels are a dead end – environmentally and economically,” said António Guterres, the secretary general of the UN.

“The only sustainable future is a renewable one. The good news is that the lifeline is right in front of us. Wind and solar are readily available and, in most cases, cheaper than coal and other fossil fuels. If we act together, the renewable energy transformation can be the peace project of the 21st century.”

Prof Petteri Taalas, the WMO secretary general, said: “Our climate is changing before our eyes. Human-induced greenhouse gases will warm the planet for many generations to come. Some glaciers have reached the point of no return and this will have long-term repercussions in a world in which more than 2 billion people already experience water stress.

“Extreme weather has the most immediate impact on our daily lives,” he said. “We are seeing a drought emergency unfolding in the Horn of Africa, recent deadly flooding in South Africa and the extreme heat in India and Pakistan. Early warning systems are critically required [to save lives] yet these are only available in less than half of WMO’s 187 member nations.

The world’s oceans absorb more than 90% of the heat trapped by greenhouse gases and 2021 set a record. The increasing warmth in the ocean, which is irreversible over timescales of centuries to millennia, has been especially strong in the last 20 years. Much of the ocean experienced at least one strong marine heatwave in 2021, the WMO said.

The global sea level also reached a new record high in 2021. It has increased by 10cm since 1993 and the rise is accelerating, driven by the melting of ice sheets and glaciers and the thermal expansion of the ocean. The rise imperils hundreds of millions of coastal dwellers, the WMO said, and increases the damage caused by hurricanes and cyclones.

Almost a quarter of CO2 emissions are absorbed by the oceans, but this causes them to become more acidic. This threatens shell-forming wildlife and corals and therefore food security, tourism and coastal protection, the WMO said. The oceans are now more acidic than for at least 26,000 years. 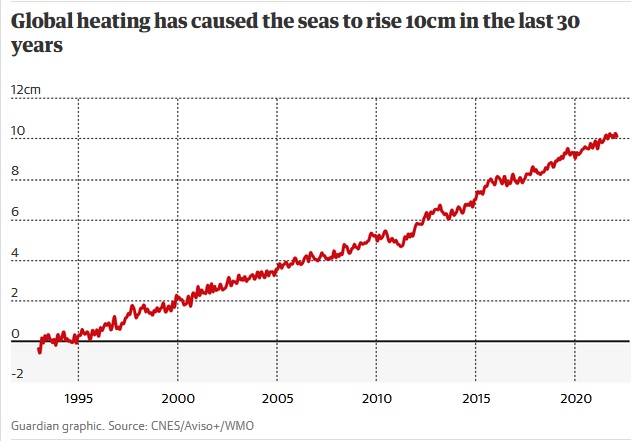 CO2 and methane, a powerful greenhouse gas, are at record levels, with CO2 concentration 50% higher than before the Industrial Revolution sparked the mass burning of fossil fuels. The global temperature in 2021 was 1.1C above the pre-industrial average, moving closer towards the 1.5C limit agreed by the world’s nations to avoid the worst climate impacts.

The WMO noted exceptional heatwaves in 2021 in western North America and the Mediterranean, deadly flooding in Henan, China, and western Europe, and rain being recorded for the first time on the summit of Greenland’s ice sheet. The agency warned eastern Africa is facing a high risk of rains failing for a fourth consecutive season, meaning the worst drought in 40 years.

Prof James Hansen, who warned the world about the climate crisis in testimony to the US Senate in 1988, said this week there was “a spectacular, continuing failure of governments to adopt effective long-term energy and climate policies.

“We must all be aware that demands for effective policies will yield only superficial change as long as the role of special interests in government remains unaddressed.”

Last week, the Guardian revealed that 195 oil and gas “carbon bombs” were planned by the industry, ie projects each producing at least a billion tonnes of CO2. These carbon bombs alone would drive global heating beyond the 1.5C limit, but the dozen biggest oil companies are on track to spend $103m a day to 2030 on climate-busting schemes.

UN report to lay out options to halt climate crisis