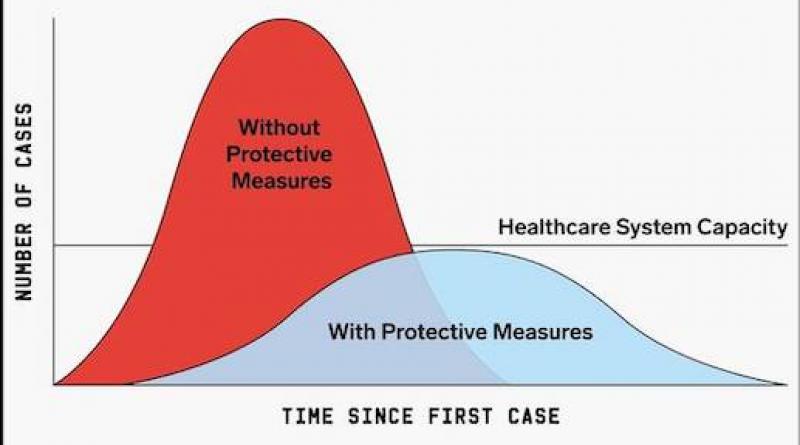 From shifting disease patterns in a warming world, to shrinking animal habitats, to the impact of air pollution in making people more vulnerable to infection, news stories over the last several days have rekindled discussion on the various connections between the climate crisis and the spread of infectious disease, including new pathogens like the coronavirus.

Scientists and health professionals have been warning for years that climate change will bring shifts in disease patterns, often producing new, more severe risk for human populations. Now, that conversation is taking on a different focus with the dawn of a fast-moving, global pandemic.

While the specific characteristics of the novel coronavirus will take time for researchers to pin down, “links between climate and infectious disease are a growing subject of interest among scientists,” veteran climate reporter Chelsea Harvey writes for E&E News and Scientific American. “As the Earth continues to warm, many scientists expect to see changes in the timing, geography, and intensity of disease outbreaks around the world. And some experts believe climate change, along with other environmental disturbances, could help facilitate the rise of more brand-new diseases, like COVID-19.”

But while there’s a considerable body of research on “vector-borne” diseases carried by other animals, like mosquitoes and ticks, disease transmission between humans is harder to study. “With directly transmitted diseases, like influenza or COVID-19, it’s much harder to run experiments,” Harvey writes. So “much of what we know about climate and directly transmitted diseases comes from large-scale observations of the way these diseases behave in the world. In this way, scientists are slowly starting to gain insight into how climate affects some of the most common viral diseases.”

They’re also having some “challenging conversations” about novel diseases like coronavirus that may become even more important as the climate crisis unfolds. Particularly with vector-borne diseases, “climate change may cause diseases that are common in some places to shift into new geographic locations,” Harvey writes, producing new vulnerability in communities that aren’t used to focusing on mosquito control, for example.

“It’s also possible that climate change may affect the emergence of entirely novel diseases, like COVID-19,” she adds. “Exactly how is highly uncertain. But it’s worth keeping in mind that most novel diseases originate in wildlife before they spread to humans,” and “as the climate changes, many animal species are likely to change their behaviour or migrate to new areas. It’s possible that in some cases, this could increase their likelihood of coming into contact with humans.”

Along with climate change, Harvey writes that deforestation and wildlife markets are major factors shifting the interactions between humans and wild species. “If you look at the emerging infectious diseases that have moved into people from animals or other sources over the last several decades, the vast majority of those are coming from animals, and the majority of those are coming from wild animals,” agrees Dr. Aaron Bernstein, a pediatrician and interim director of Harvard University’s Center for Climate, Health, and the Global Environment, in a separate interview with InsideClimate News. “We have transformed life on Earth. We are having a massive effect on how the relationships between all life on Earth operate and also with ourselves. We shouldn’t be surprised that these emerging diseases pop up.”

“We don’t know with COVID, what role if any the climate effects that we’re already seeing in species around the world may have had on the risk of this disease emerging,” he stresses. But a warming climate has already triggered “this extraordinary migration to the poles”, as species scramble to escape the heat. “That has led to the spread of pathogens, because animals that carry pathogens came in contact with other animals that didn’t carry those pathogens, and there was transmission.”

So “the bottom line here is that if you wanted to prevent the spread of pathogens, the emergence of pathogens, as we see not just with people and COVID, but as well with wildlife, you wouldn’t transform the climate. Because that forces species to come into contact with other species that may be vulnerable to infections. There are lots of forces, and habitat loss is a major contributor to it.”

Bernstein adds that fossil fuels and other sources of air pollution make humans more vulnerable to respiratory disease, including COVID-19. “We have lots of research that shows that air pollution, particularly particulate matter air pollution, increases the risk of people getting sick with bacterial and viral pathogens that cause pneumonia, and that people who are exposed to more air pollution get sicker when they get exposed to those kinds of pathogens.”

While fossil fuels are a major source of air pollution as well as greenhouse gas emissions, any form of combustion has an impact, Bernstein notes. “It could be indoor pollution from cook stoves. It could be burning agricultural waste. It could be burning wood. It could be wildfire. Air pollution is strongly associated with people’s risk of getting pneumonia and getting sicker when they do get pneumonia,” though “we don’t really have much in the way of evidence to show that connection with the COVID epidemics.”