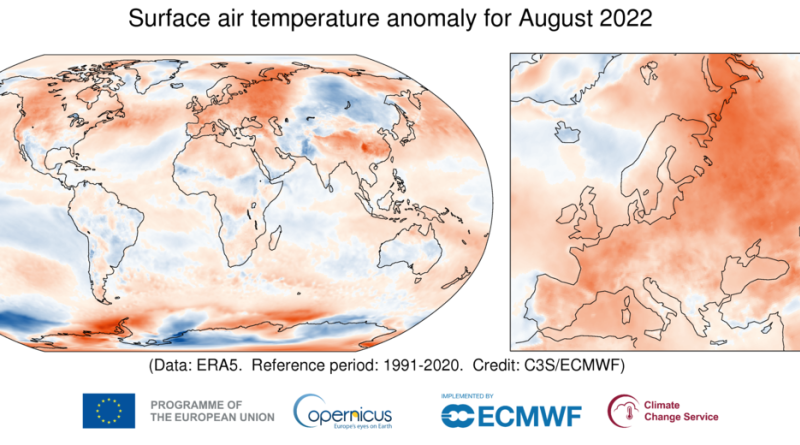 The Copernicus Climate Change Service (C3S), implemented by the European Centre for Medium-Range Weather Forecasts on behalf of the European Commission with funding from the EU, routinely publishes monthly climate bulletins reporting on the changes observed in global surface air temperature, sea ice cover and hydrological variables. All the reported findings are based on computer-generated analyses using billions of measurements from satellites, ships, aircraft and weather stations around the world.

Globally, the average August 2022 temperature was:

The average temperature over Europe in 2022 was: 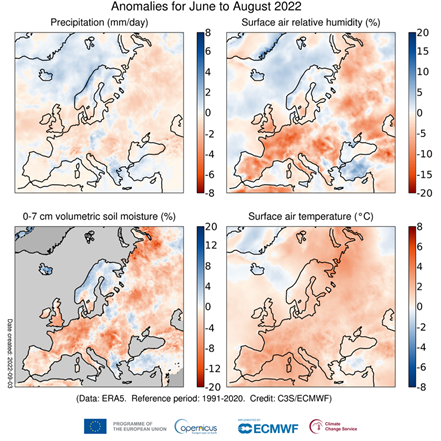 Senior Scientist for the Copernicus Climate Change Service, Freja Vamborg, states: “An intense series of heatwaves across Europe paired with unusually dry conditions, have led to a summer of extremes with records in terms of temperature, drought and fire activity in many parts of Europe, affecting society and nature in various ways. The Copernicus Climate Change Service data shows that we’ve not only had record August temperatures for Europe but also for summer, with the previous summer record only being one year old.”

Video material accompanying the maps can be found here.

More information about climate variables in August and climate updates of previous months as well as high-resolution graphics and the video can be downloaded here.

Answers to frequently asked questions regarding temperature monitoring can be found here.

Information about the C3S data set and how it is compiled

Sea ice maps and data are from a combination of information from ERA5, as well as from the EUMETSAT OSI SAF Sea Ice Index v2.1, Sea Ice Concentration CDR/ICDR v2 and fast-track data provided upon request by OSI SAF.

More information can be found here.

We just lived through the Earth’s hottest month on record