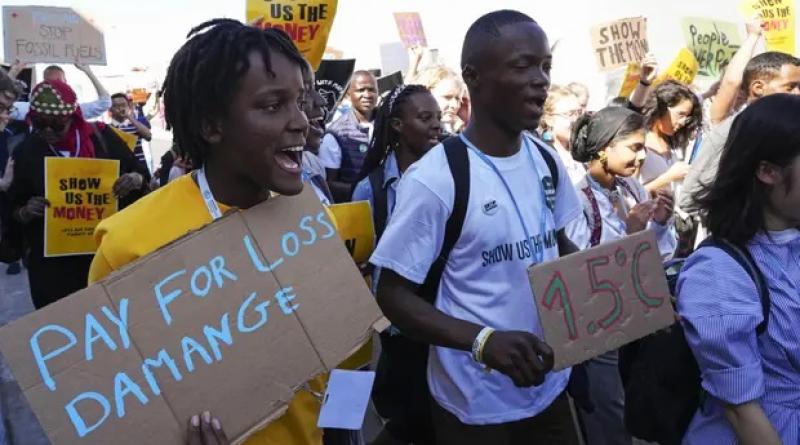 Developing countries celebrated on Sunday morning as crucial climate talks ended with a “historic” deal on their most cherished climate goal: a global fund for “loss and damage”, providing financial assistance to poor nations stricken by climate disaster.

However, the deal was far from perfect, with several key elements flawed or lacking. Some countries said the commitments on limiting temperatures to 1.5C represented no progress on the Cop26 conference in Glasgow last year, and the language on phasing out fossil fuels was weak.

Sameh Shoukry, the Egyptian foreign minister and president of the Cop27 UN climate summit in Egypt, said: “We rose to the occasion. We worked around the clock, day and night, but united in working for one gain, one higher purpose, one common goal. In the end we delivered. We listened to the calls of anguish and despair.”

Sherry Rehman – climate change minister of Pakistan where suffering in record floods in September became emblematic of the devastation developing countries are facing – hailed the “historic” loss and damage deal to applause in the conference hall.

“This is not about accepting charity,” she said. “This is a down payment on investment in our futures, and in climate justice.”

Simon Stiell, the UN climate chief, told exhausted delegates as the gavel was brought down on the final deal at 7am, after an all-night negotiating session: “It wasn’t easy at all. But this outcome will benefit the most vulnerable around the world.”

But he warned that time was short to take action on the targets agreed, and there was “no room for backsliding”. He said the national plans that countries had submitted on cutting greenhouse gas emissions by 2030 were not enough to meet the vital goal of limiting global temperature rises to 1.5C above pre-industrial levels, in line with scientific advice. “The [national plans] just don’t add up,” he said. “Keep your eye on 2030. That is our horizon.”

Poor countries and climate campaigners rejoiced. Sir Molwyn Joseph, minister of health, wellbeing and the environment of Antigua and Barbuda, and chair of the Alliance of Small Island States, said: “Today, the international community has restored global faith in this critical process that is dedicated to ensuring no one is left behind. The agreements made at Cop27 are a win for our entire world. We have shown those who have felt neglected that we hear you, we see you, and we are giving you the respect and care you deserve. We must work even harder to hold firm to the 1.5C warming limit, to operationalise the loss and damage fund, and continue to create a world that is safe, fair, and equitable for all.”

The two-week long conference in Sharm El-Sheikh ran more than 36 hours over its Friday night deadline, and was marked by stark division and harsh words between the rich and the poor.

At many stages, a deal looked impossible to reach. In the final hours, countries wrangled over single words in an outcome that spanned issues from the 1.5C temperature goal, the phasing out of fossil fuels, the needs and rights of indigenous people, the protection of nature, and how to engineer a “just transition” to clean energy for those economically dependent on fossil fuels.

Many felt the deal fell well short on important issues. Frans Timmermans, vice-president of the European Commission, spoke of the tortuous negotiations, which included some countries trying to unpick the 1.5C goal, and to abolish the requirement established in Glasgow for countries to update their plans on emissions every year.

“Too many parties are not ready to make more progress today in the fight against the climate crisis,” he warned. “There were too many attempts to roll back what we agreed in Glasgow. This deal is not enough [on cutting emissions].”

Timmermans said the language on 1.5C was too weak. “We are disappointed we didn’t achieve [more],” he said. “We have all fallen short.”

Alok Sharma, the UK’s president of Cop26, spoke in clear frustration of having to defend commitments agreed last year from sustained attack by other countries. “We had to fight relentlessly to hold the line,” he said. “We had to battle to build on the key outcomes of Glasgow.”

A proposal from India to stipulate the phasing down of all fossil fuels was also mauled by oil-producing countries at the talks, and watered down to a phasing down of coal, which reflected exactly the commitment made in Glasgow. The wording was the subject of furious discussions in the early hours of Sunday morning.

But in the end, as dawn broke over the Red Sea, the Egyptian hosts drafted a compromise deal that achieved the consensus required under the UN rules. Shoukry said: “We leave with stronger collective will and determination.”

He said the 1.5C temperature limit remained within reach, and countries must work on staying within that limit. He added that it was appropriate that the loss and damage fund was agreed in Africa.

Loss and damage refers to the most severe impacts of extreme weather on the physical and social infrastructure of poor countries, and the financial assistance needed to rescue and rebuild them.

It was the most contentious issue at the conference, and has been a long-running demand by developing countries since 1992. For nearly two weeks, the EU and the US refused demands from poor countries for a new fund to address loss and damage, arguing that existing funds should be redirected for the purpose. Early on Friday morning, the EU made a U-turn, to agree to a fund on condition that big economies and big emitters still classed as developing countries under the UNFCCC rules, which date back to 1992, should be included as potential donors, and excluded as recipients.

Many poor countries and campaigners saw this as an attempt to divide the neediest developing countries from bigger economies such as China, Saudi Arabia and other Gulf states, and strongly resisted.

That row took up most of the remaining negotiating time on Friday and Saturday, and the US only signalled its agreement to the fund on Saturday. But the compromise – by which the vulnerable will be prioritised, and the door is open to voluntary contributions from countries still classed as developing – was agreed in the early hours of Sunday morning.

It is likely to take at least a year, until the next climate conference of the parties in United Arab Emirates in November 2023, to sort through some of the details of how the fund can work. There is also, so far, little money for the fund, as few nations have made significant pledges of cash for loss and damage.

Antonio Guterres, the UN secretary-general, said the fund was “an important step towards justice” for poor countries that have done little to cause the climate crisis, but are suffering its worst impacts.

“I welcome the decision to establish a loss and damage fund and to operationalise it in the coming period,” Guterres said. “Clearly this will not be enough, but it is a much-needed political signal to rebuild broken trust. The voices of those on the frontlines of the climate crisis must be heard.”

COVER PHOTO: A Fridays for Future protester at the Cop27 UN Climate Summit holds a sign calling for the “loss and damage” deal. Photograph: Peter Dejong/AP

Adding insult to injury: the case of Loss and Damage.

Climate ‘loss and damage’: why it’s such a big deal at Cop27