COP26: Why we marched in Glasgow 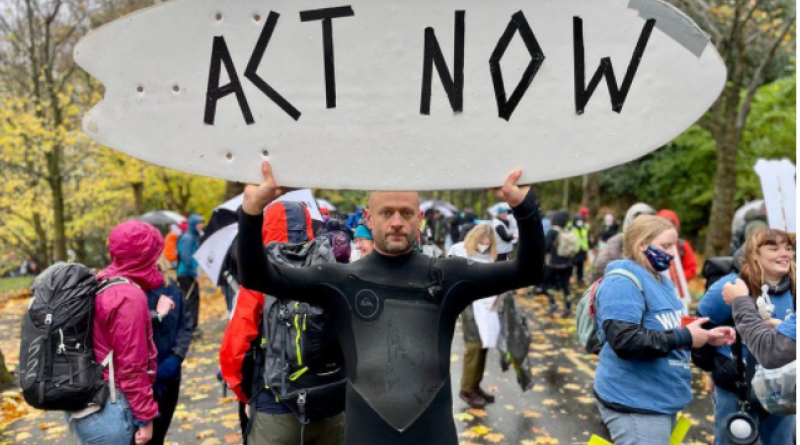 Tens of thousands of people have braved the wet and windy conditions in Glasgow to take part in the biggest mass protest of the COP26 summit.

A huge column of activists made its way from Kelvingrove Park to the city centre, and on to a rally on Glasgow Green.

Some of them explained why they felt it was so important to be there.

Hugo Tagholm, chief executive of Surfers Against Sewage, has travelled to Glasgow from Cornwall for the rally.

The 46-year-old said: "The ocean is front and centre of the impact of climate change but it is also part of the solution."

He said the charity's supporters were taking part in events across the country to highlight the impact of human and plastic waste.

He added: " I think campaigners are having an effect and I believe the next decade will be the most radical period of environmental action the world has ever seen." 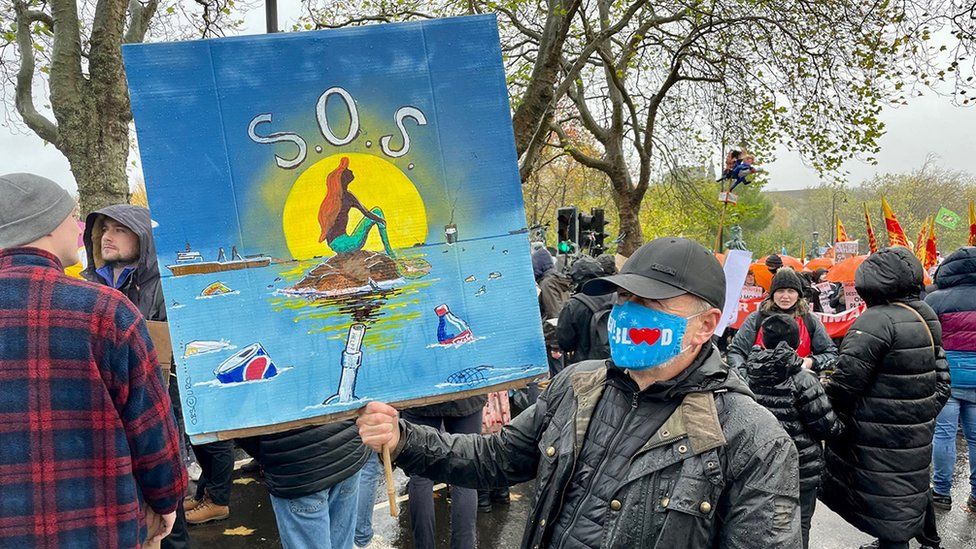 Retired designer Charlie Rohan travelled from Edinburgh to take part in the march.

He made his own sign for the occasion but as the rain lashed down he admitted: "The cardboard is getting heavier by the minute."

Asked why he made the journey, the father-of-two said: "This is our last chance. If we don't take action now then COP 27, 28 and 29 will be a waste of time."

The 61-year-old is a keen walker and expressed dismay at the amount of rubbish he encounters washed up on Scotland's coastlines.

He added: "The UK says it is a leader on climate change but we need to follow that through." 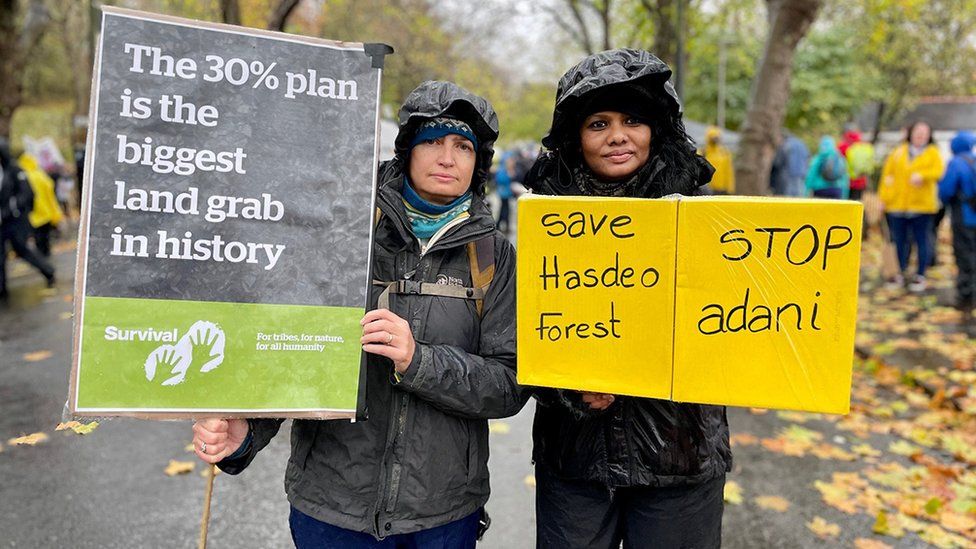 Ruby Hembrom is on the march to raise awareness of the plight of people in India.

She said: "When you look at climate change the most vulnerable people will be the most impacted.

"Indigenous people are forced from the forests due to coal and mining projects.

"The consequences are devastating."

The London-based student was joined by Sophie Grig, senior campaigner with Survival International.

The group works to support native groups across the world, especially those who face persecution and displacement.

She said: "We have to stop burning and extracting fossil fuels.

"And we have to end the suffering of indigenous communities." 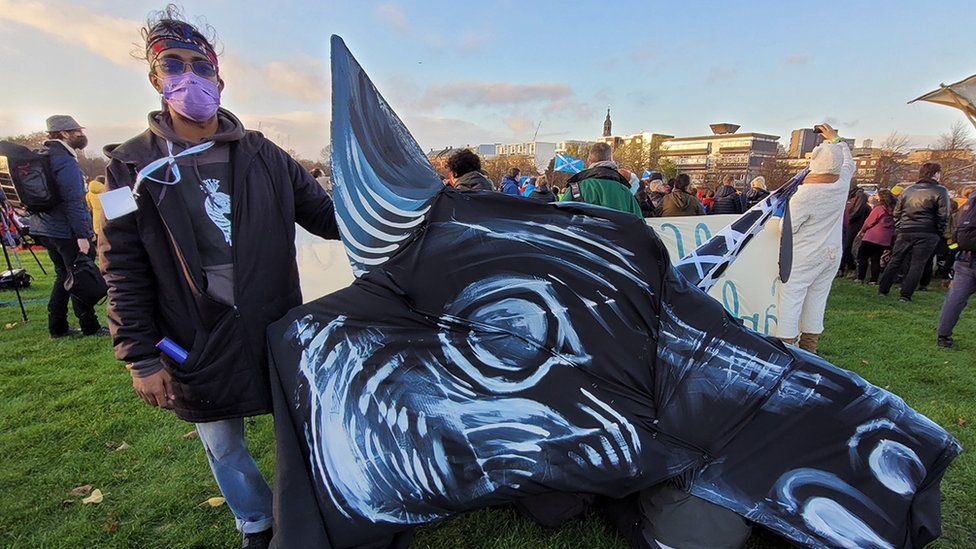 Amalen S has travelled to Glasgow from Malaysia with Friends Of The Earth International, campaigning against carbon markets.

To illustrate their point they have built a large "carbon unicorn" head - Amalen tells the BBC it emits smoke when up and running.

"Carbon market is the same thing as chasing a carbon unicorn, it sounds amazing but it doesn't exist," said Amalen.

The group has organised a number of demos throughout the summit, including one at the SEC on Friday.

Amalen is also part of the Activist Network and his work involves helping people express their views on climate change through artwork.

"A lot of lobbying happens behind closed doors," he added. 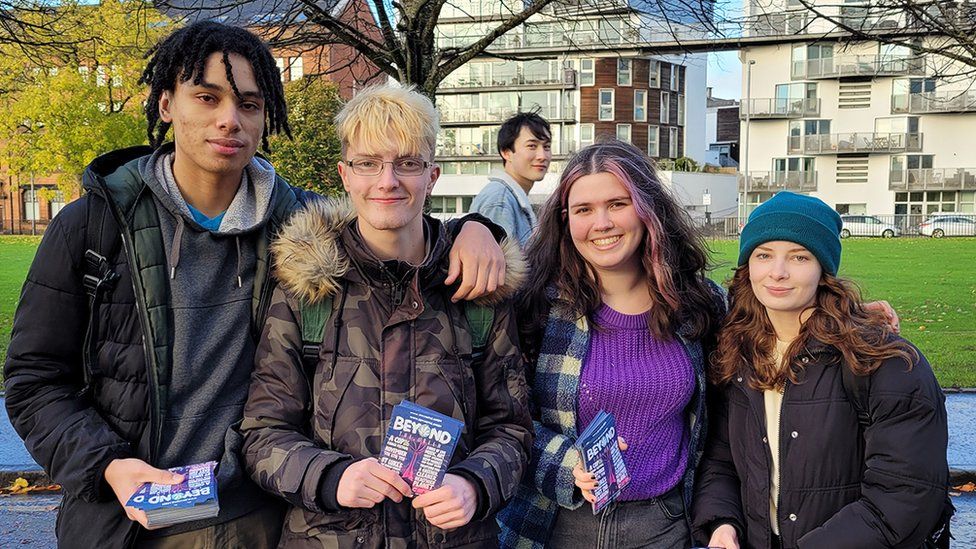 Glasgow students Xavier, Ben, Sophie and Abby were giving out flyers for Beyond the Green, an event with live music and speakers promoting sustainability and the use of hemp during COP26.

Ben, who studies sound production, said: "Its a great material to use instead of non-biodegradeables. It can be used to create anything from houses, rope, clothes and food."

He added climate change is something he has always thought about, and tried his best to recycle and go "beyond the bare minimum" to live sustainably.