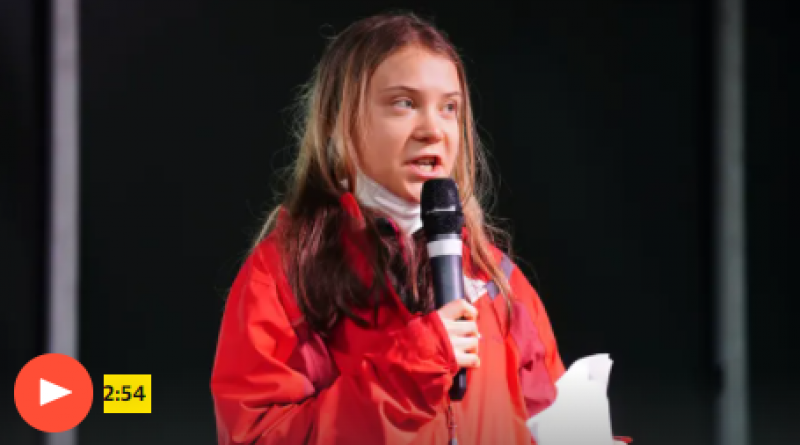 Day five (and with it the first week at Cop26) is winding down in Scotland. Still, events are only just getting started. Tomorrow the main protest will take place, and negotiations will continue through the weekend.

Several thousand young people marched into central Glasgow. Children were on the streets with their parents, classmates and teachers. They demanded world leaders do more to stop polluters and save the planet from catastrophic rising temperatures.

The climate activist Greta Thunberg slammed Cop26 as a “failure” and a “PR event”. “The leaders are not doing nothing, they are actively creating loopholes and shaping frameworks to benefit themselves and to continue profiting from this destructive system,” she said.

Scientists revealed that the carbon dioxide emissions of the richest 1% of humanity are on track to be 30 times greater than what is compatible with keeping global heating below 1.5C.

An updated UN analysis found that global carbon emissions are on track to rise by 13.7% by 2030. That is in stark contrast to the 50% cut that is needed by then to retain the possibility of keeping global temperature rise to 1.5C and avoid the worst impacts of the climate crisis.

However, initial analysis by the Energy Transition Commission showed that commitments and initiatives seen in the first week of Cop26 – if fully delivered by nations – would amount to 40% of the emissions cuts needed by 2030 to keep the world on track to a maximum of 1.5C of global heating.

The US climate envoy John Kerry said the $100bn promised by rich nations to poor nations can now be delivered in 2022, a year earlier than previously thought. It would still be two years later than its initial target.

And finally ... International delegates and Cop26 attendees expressed mixed views on Irn-Bru. Some conference visitors are now hooked on Scotland’s famous fizzy drink, while others can’t wait to leave it behind.

Patrick Greenfield has been speaking toIndigenous young people from the Amazon, who were among the thousands of protesters in Glasgow today.

Samela Sataremawe said that in Brazil, people were “suffering every day from climate change. We are every day defending our territories with our lives. Indigenous people are dying, our brothers and sisters are dying. Yanomami children are dying in rivers contaminated by mining industries.”

She added: “As frontline communities we were in the front of the march, because we are putting our bodies on the line to protect the Amazon rainforest against extractive industries that are responsible for climate change today.”

If the deluge of headlines and updates is getting on top of you, here is a really good explainer on the Guardian’s Today in Focus podcast.

Cop26 is a failure and a 'PR event', says Greta Thunberg

Thunberg has now left the stage after a short but burning critique of Cop26.

“The leaders are not doing nothing, they are actively creating loopholes and shaping frameworks to benefit themselves and to continue profiting from this destructive system,” she said.

“The Cop has turned into a PR event,” she added.

“[Leaders] have had decades of ‘blah blah blah’ and where has that left us?” says Thunberg.

And now some tough words for us, the press.

The media is reporting on what leaders say they are going to do, and not whether they keep their promises, she says.

“Time and time again, the media fails to hold people in power responsible.”

Colonialism is the root cause of the climate crisis, Thunberg says. But that is “too uncomfortable” a topic for people inside the conference to discuss.

Greta Thunberg has taken the stage. And more tough words for the leaders in the conference halls.

“We know our emperors are naked,” she says.

The avalanche of commitments and initiatives seen in the first week of Cop26 – if fully delivered by nations – would amount to 40% of the emissions cuts needed by 2030 to keep the world on track to a maximum of 1.5C of global heating. That is the conclusion of an initial analysis by the Energy Transition Commission.

To keep the goal of 1.5C alive, the ETC said, annual global CO2 emissions must halve by 2030, a cut of about 22bn tonnes. It calculates that new national commitments to reducing emissions, not including India’s, could cut 3bn tonnes from that, and that the agreement by many countries to stop deforestation by 2030 cuts another 3.5bn tonnes.

A further 2.5bn tonnes is cut by a swathe of initiatives from countries and companies to move away from coal power and invest more in renewable energy and electric vehicles. The ETC said more announcements were expected in the second week of Cop26.

There has also been a big pledge on methane, a potent greenhouse gas. The ETC estimates that the commitment by 90 countries to reduce methane emissions by 30% by 2030 would deliver about 40% of the total methane emissions needed.

Lord Adair Turner, the chair of the ETC, said “good progress” had been seen in the first week of Cop26: “But of course it is still not enough and even with further progress next week – on steel, aviation, shipping – we are not going to achieve the full 22bn tonnes we need; we’re not going to be able to go home from Glasgow saying job done.

Chris Stark, the head of the UK’s Climate Change Committee, said: “The ETC take on week one of Cop26 is probably going to be as close to the authoritative view on the emissions situation as we’ll get this week. So far, this is positive stuff on the new ambitions.”

Boris Johnson has been awarded zero out of five stars for his standup performance speech at Monday’s opening ceremony.

Some strong words from a Filipino youth activist currently on the mic (introduced simply as “John”):

Cop, he said, has “devolved into a celebration of pointless promises by world leaders, patting themselves on the back, all the while sacrificing millions in the Global South on the altar of capitalism and imperialism.”

Everyone is cheering in the Glasgow crowd.

Greta Thunberg: It's never too late to do as much as we can.