Concern over climate crisis at highest level in 30 years in wake of IPCC report, poll finds 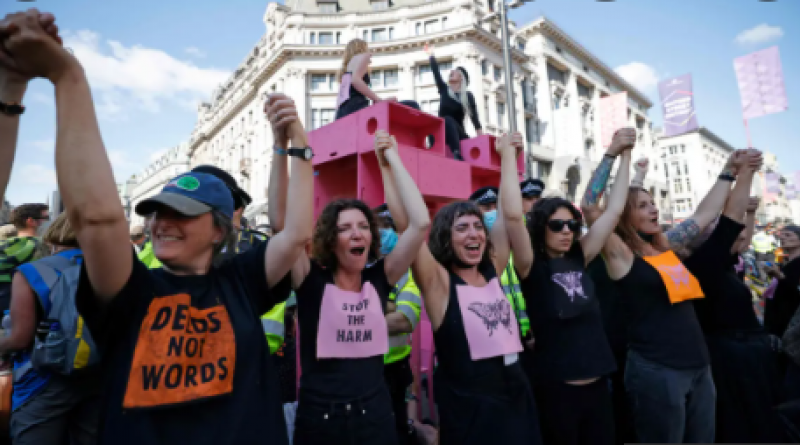 Nearly a third of Britons now see environmental issues as a big worry for the country.

Concern over the climate crisis is at a 30-year high in the UK, a poll finds.

Nearly a third (32 per cent) of the British public said they view the climate and environmental crises as a big issue for the country in a monthly survey conducted in August.

This is the second-highest level of concern ever recorded. Public concern was only higher in 1989, when 35 per cent of people listed environmental issues as a worry following the logging of the highest temperature since 1976 at Heathrow.

Concern over environmental issues has risen by 16 percentage points since July, according to the Ipsos Mori poll.

The survey was conducted from 6 to 13 August, around the time of the release of a landmark climate report from the UN’s Intergovernmental Panel on Climate Change (IPCC).

The report, from 234 scientists in 66 countries, said there is “unequivocal” evidence that humans have driven the crisis, and the world’s aspiration of keeping global temperatures to 1.5C above pre-industrial levels risks slipping beyond reach without urgent action.

“Public concern about the environment has reached a historically high level this month, with publication of the new IPCC report and reports of fires and flooding around the world,” said Mike Clemence, a researcher at Ipsos Mori.

“But this jump in concern is built on a steady rise in the level of worry on this topic which has been building since around 2015.”

“This is just one poll but it is a remarkable finding,” Prof Stephen Fisher, an expert in public opinion from the University of Oxford, told The Independent.

“The 32 per cent who mentioned the environment, climate change or pollution as a major issue for Britain this month is up from 21 per cent in June and 16 per cent in July.” 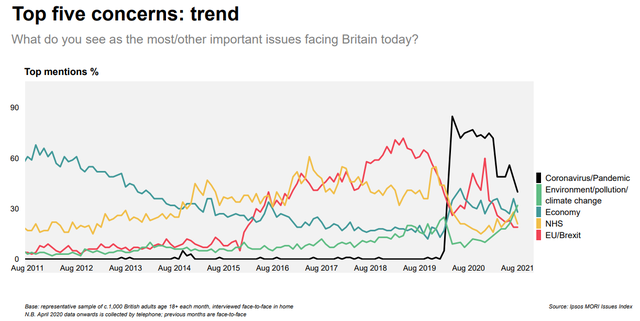 He added that the 1989 record high in climate concern “should be seen in the context of a wave of environmentalism then”.

“That survey happened shortly after the Greens won 15 per cent in the European Parliament elections in June 1989 – their best ever result in a UK wide election, and better than any regional or national elections for the party.”

The poll of 1,013 adults across the UK found that Britons list environmental issues as the second biggest behind the Covid-19 pandemic.

Around 40 per cent of people mention Covid-19 as a big issue facing Britain. However, this is 8 percentage points lower than the level of concern in July.

The poll also found that older people are more likely than average to mention climate and environmental issues as a concern.

A total of 42 per cent of respondents aged 55 to 64 said they viewed the climate and environmental crises as a big issue. This compared to 24 per cent of those aged 18 to 34.

The Ipsos Mori Issues Index each month asks Britons: “What do you see as the most/other important issues facing Britain today?”

It relies on “spontaneous” responses – meaning participants are not prompted with any answers.

“The real advantage of this question is that it’s been asked with the same wording for decades, so we can get a comparable view of how opinion is changing,” Leo Barasi, author of the Climate Majority, told The Independent.

“Another thing that makes this question useful is that Ipsos Mori asks it without prompting respondents, so you can see what people are really thinking about a particular issue. It’s particularly relevant for politicians as it tells them what voters most care about.”

He agreed that the findings were “remarkable”.

“We shouldn’t lose sight of the fact that only three years ago the environment wasn’t even a top 10 issue with the public, with less than 10 per cent of people naming it as a priority,” he said.

“Now it’s second only to a global pandemic. In the near future, climate change may well become the top issue for the UK public – an extraordinary turnaround.”