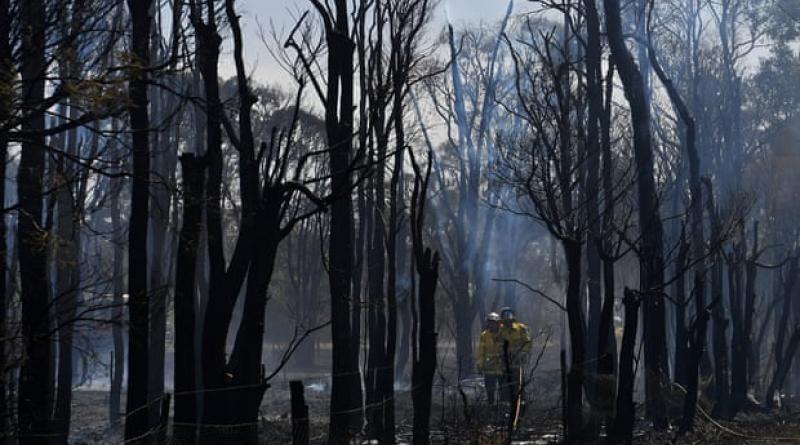 Head of World Meteorological Organization says ‘no sign of a slowdown, let alone a decline’

The concentration of climate-heating greenhouse gases has hit a record high, according to a report from the UN’s World Meteorological Organization.

The jumps in the key gases measured in 2018 were all above the average for the last decade, showing action on the climate emergency to date is having no effect in the atmosphere. The WMO said the gap between targets and reality were both “glaring and growing”.

The rise in concentration of greenhouses gases follows inevitably from the continued surge in global emissions, which was described as “brutal news” for 2018. The world’s scientists calculate that emissions must fall by half by 2030to give a good chance of limiting global heating to 1.5C, beyond which hundreds of millions of people will suffer more heatwaves, droughts, floods and poverty.

But Petteri Taalas, the WMO secretary-general, said: “There is no sign of a slowdown, let alone a decline, despite all the commitments under the Paris agreement on climate change. We need to increase the level of ambition for the sake of the future welfare of mankind.

“It is worth recalling that the last time the Earth experienced a comparable concentration of carbon dioxide was 3-5m years ago. Back then, the temperature was 2-3C warmer and sea level was 10-20 metres higher than now.”

Three-quarters of the emissions cuts pledged by countries under the Paris agreement of 2015 are “totally inadequate”, according to a comprehensive expert analysis published earlier in November, putting the world on a path to climate disaster. Another report has found that nations are on track to produce more than double the fossil fuels in 2030 than could be burned while keeping heating under 1.5C.

“The [CO2 concentration] number is the closest thing to a real-world Doomsday Clock, and it’s pushing us ever closer to midnight,” said John Sauven, head of Greenpeace UK. “Our ability to preserve civilisation as we know it, avert the mass extinction of species, and leave a healthy planet to our children depend on us urgently stopping the clock.”

The WMO report, published on Monday, found the global average concentration of CO2 reached 407.8 parts per million in 2018, up from 405.5ppm in 2017. It is now 50% higher than in 1750, before the industrial revolution sparked the widespread burning of coal, oil and gas. 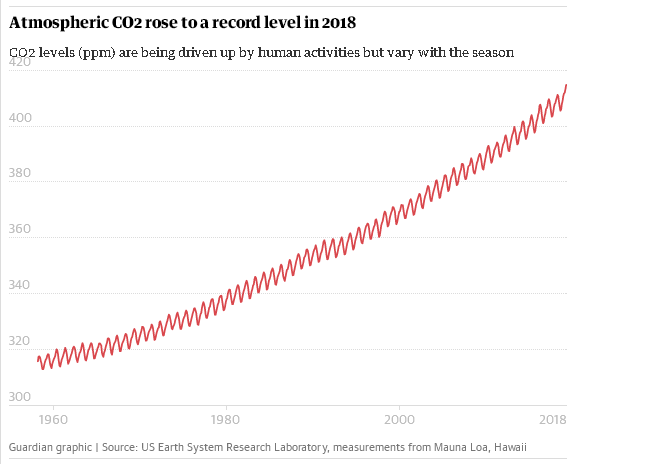 Since 1990, the increase in greenhouse gas levels has made the heating effect of the atmosphere 43% stronger. Most of that – four-fifths – is caused by CO2. But the concentrations of methane and nitrous oxide, the two other key greenhouse gases, also surged in 2018 by a higher amount than the annual average over the past decade.

Methane, which is produced by cattle, rice paddies and fossil fuel exploitation, is responsible for 17% of the heating effect. Its concentration is now more than double pre-industrial levels.

Nitrous oxide, which comes from heavy fertiliser use and forest burning, is now 23% higher than in 1750. The observations are made by the Global Atmosphere Watch network, which includes stations in the Arctic, high mountains and tropical islands.

“The record rise in greenhouse gas concentrations is a cruel reminder that for all the real progress in clean technology, we have yet to even stop global emissions increases,” said Nick Mabey, chief executive of think tank E3G. “The climate system cannot be negotiated with. Until we stop new investment in fossil fuels and massively scale up green power the risks from catastrophic climate change will continue to rise.”

When the world’s nations agreed the Paris deal in 2015, they pledged to ramp up their promised emissions cuts by the annual UN climate summit in 2020, which will be hosted by the UK in Glasgow. This year’s summit needs to do vital preparatory work and begins on 2 December in Madrid, Spain. Chile had been due to host but cancelled because of civil unrest.

Richard Black, director of the Energy and Climate Intelligence Unit in the UK, said: “This record level of greenhouse gases should act as a sobering reminder to governments that so far they are collectively reneging on the pledge they made at the Paris summit, of attempting to keep global warming to 1.5C. That window is closing, and Chile, Italy and the UK [must] use all the diplomatic tools they have to put emissions on a trajectory closer to what science recommends and the public want.”

Ahead of heating season, EU gas tanks are full.

30 of the World's largest & most influential cities have peaked greenhouse gas emissions.