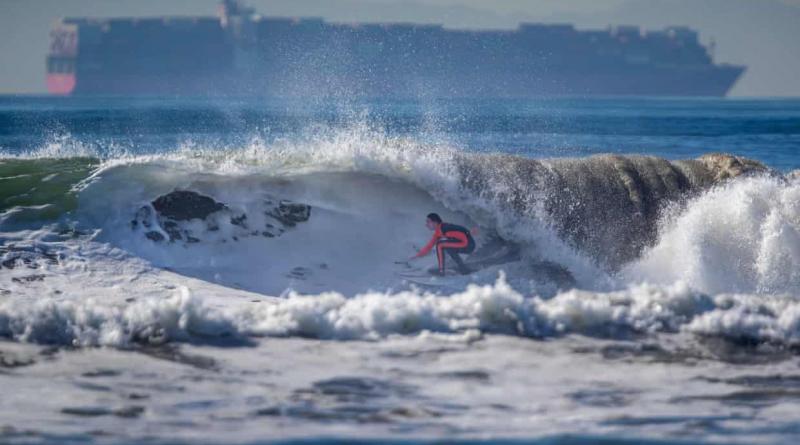 Scientists say temperatures likely to be increasing faster than at any time in past 2,000 years.

The world’s oceans reached their hottest level in recorded history in 2020, supercharging the extreme weather impacts of the climate emergency, scientists have reported.

More than 90% of the heat trapped by carbon emissions is absorbed by the oceans, making their warmth an undeniable signal of the accelerating crisis. The researchers found the five hottest years in the oceans had occurred since 2015, and that the rate of heating since 1986 was eight times higher than that from 1960-85.

Reliable instrumental measurements stretch back to 1940 but it is likely the oceans are now at their hottest for 1,000 years and heating faster than any time in the last 2,000 years. Warmer seas provide more energy to storms, making them more severe, and there were a record 29 tropical storms in the Atlantic in 2020. 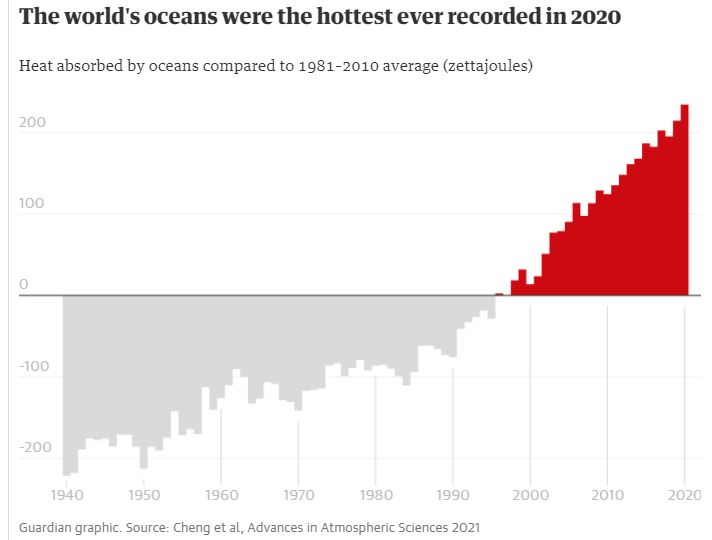 Furthermore, warmer water is less able to dissolve carbon dioxide. Currently, 30% of carbon emissions are absorbed by the oceans, limiting the heating effect of humanity’s burning of fossil fuels.

“Ocean warming is the key metric and 2020 continued a long series of record-breaking years, showing the unabated continuation of global warming,” said Prof John Abraham, at the University of St Thomas in Minnesota, US, and one of the team behind the new analysis.

“Warmer oceans supercharge the weather, impacting the biological systems of the planet as well as human society. Climate change is literally killing people and we are not doing enough to stop it.”

Recent research has shown higher temperatures in the seas are also harming marine life, with the number of ocean heatwaves increasing sharply.

The oceans cover 71% of the planet and water can absorb thousands of times more heat than air, which is why 93% of global heating is taken up by the seas. But surface air temperatures, which affect people most directly, also rose in 2020 to the joint highest on record.

The average global air temperature in 2020 was 1.25C higher than the pre-industrial period, dangerously close to the 1.5C target set by the world’s nations to avoid the worst impacts.

The latest research, published in the journal Advances in Atmospheric Sciences, showed the oceans absorbed 20 zettajoules more heat than in 2019. This is equivalent to every person on Earth running 80 hairdryers all day, every day, or the detonation of about four atomic bombs a second.

The analysis assessed the heat absorbed in the top 2,000 metres of the ocean. This is where most of the data is collected and where the vast majority of the heat accumulates. Most data is from 3,800 free-drifting Argo floats dispersed across the oceans, but some comes from torpedo-like bathythermographs dropped from ships in the past.

The study also reported that the sinking of surface ocean waters and upwelling of deeper water is reducing as the seas heat up. This means the surface layers heat up even further and fewer nutrients for marine life are brought up from the depths.

The worldwide lockdowns resulting from the coronavirus pandemic in 2020 cut carbon emissions by about 7%. While this was a record drop, it was “not even a blip” in terms of the total CO2 in the atmosphere and had no measurable effect on ocean heating.

“The fact the oceans reached yet another new record level of warmth in 2020, despite a record drop in global carbon emissions, drives home the fact that the planet will continue to warm up as long as we emit carbon into the atmosphere.” said Prof Michael Mann, at Penn State University in the US, and one of the study team. “It is a reminder of the urgency of bringing carbon emissions down rapidly over the next several years.”

Prof Laure Zanna, of New York University, said: “Continuous ocean temperature measurements, as presented in this study, are crucial to quantify the warming of the planet.”

Rising sea level driven by heating, as well as the melting of glaciers and ice caps was important, she said. “That directly impacts a significant fraction of the world’s population.”

More than 50 countries commit to protection of 30% of Earth's land and oceans.

How our warmer oceans are contributing to climate breakdown.