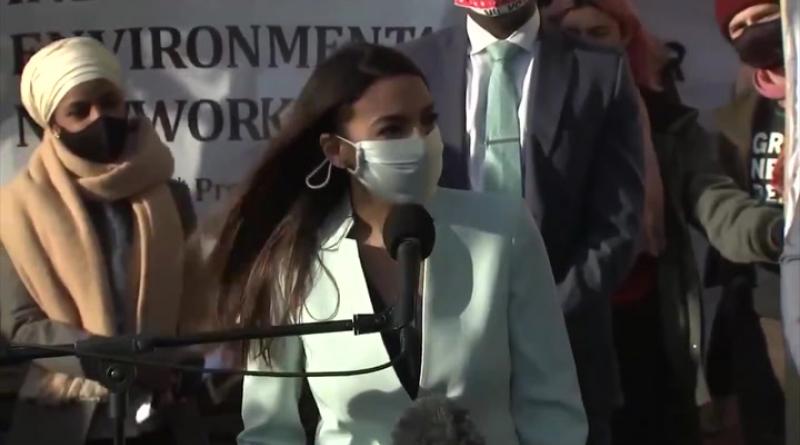 A report published in the FT yesterday claimed officials involved in preparations for next year’s UN COP26 climate change summit have been “looking at research suggesting that if you reduced those emails by just one a day, you would save a lot of carbon”.

But experts have said otherwise. Prof Chris Preist, a researcher of sustainability and computer systems, told The Independent: “People should not worry about their email footprint too much because they only have a small effect on it and it’s a relatively small part of their own footprint.”

Meanwhile, climate activists rallied yesterday outside the Democrat’s headquarters in Washington DC in protest of Joe Biden’s early hires of key staff with connections to the oil and gas industry.

Politicians including Alexandria Ocasio-Cortez marched alongside protesters. AOC, as she is commonly called, said at the rally: “We’re going to organise and demand that the Biden administration, which I believe is decent and kind and honourable, keep their promise.”

See below for our live coverage as it happened.

Good morning, and welcome to The Independent’s rolling coverage of the climate crisis.

The UK has been tasked with finding innovative ways to cut the nation’s carbon emissions before Cop26 , which will be held in Glasgow next November, and the footprint left by web users is thought to be the focus of that endeavour.

A study commissioned by energy company OVO at the end of 2019 found that if every adult in the UK sent one fewer “thank you” email a day the UK could save more than 16,433 tonnes of carbon a year – the equivalent to 81,152 flights to Madrid. The 10 most “unnecessary” emails OVO found were messages saying only “thank you”, “appreciated”, “cheers” and “LOL”.

But scientists are not convinced this is the answer. “People should not worry about their email footprint too much because they only have a small effect on it and it’s a relatively small part of their own footprint,” Prof Chris Preist, a researcher of sustainability and computer systems at the University of Bristol, told The Independent’s Daisy Dunne last night.

Read her analysis in full here: Do we need to send fewer ‘unnecessary emails’ to tackle the climate crisis?

Sunrise Movement, the American youth-led organisation fighting for climate change to be taken seriously in government, led a rally yesterday outside the Democratic National Committee headquarters in Washington DC.

The aim: to encourage Joe Biden to remember that their votes were what won him the White House, and not to recuit members into his adminsitration who have strong affiliations with anti-environemtnal organisation such as oil and gas giants.

Politicians including Alexandria Ocasio-Cortez, Cori Bush and Jamaal Bowman marched alongside protesters, calling for the president-elect to stick by the environmental pledges he made throughout his victorious campaign.

AOC, as she is commonly called, said at the rally: “We’re going to organise and demand that the Biden administration, which I believe is decent and kind and honourable, keep their promise.” Ms Ocasio-Cortez also reminded Mr Biden that the climate emergency is a “top three issue” and one that he must take seriously when he is sworn into office in January.

Mr Biden has been on the receiving end of mass criticism after announcing some of his early hires, one of who is the Democratic Party’s top recipient of fossil fuel industry money. Representative Cedric Richmond, a Democrat from Louisiana, will lead the White House Office of Public Engagement, where Politico reports he is “expected to serve as a liaison with the business community and climate change activists”.

During his 10 years in Congress, Mr Richmond has received roughly $341,000 (£256,505) from donors in the oil and gas industry — the 5th highest total among House Democrats, according to reports in the Daily Poster. The sum includes corporate political action committee donations of $40,000 (£30,089) from oil giant ExxonMobil.

Mr Biden has promised a $1.7tn (£1.3tn) plan to combat climate change, and his making the climate crisis one of his campaign’s top priorities is thought to be a major reason he won the presidential election. He is yet to comment on the backlash surrounding Mr Richmond’s appointment.