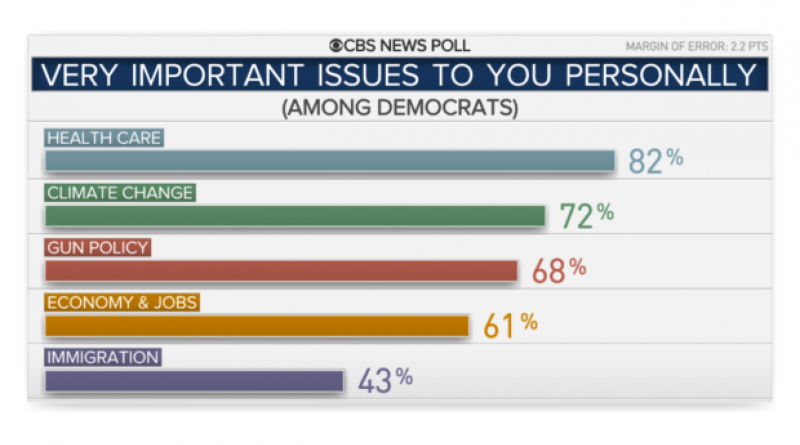 Seventy-two percent of Democrats call climate change very important — ranking it just below health care on a list of issues. 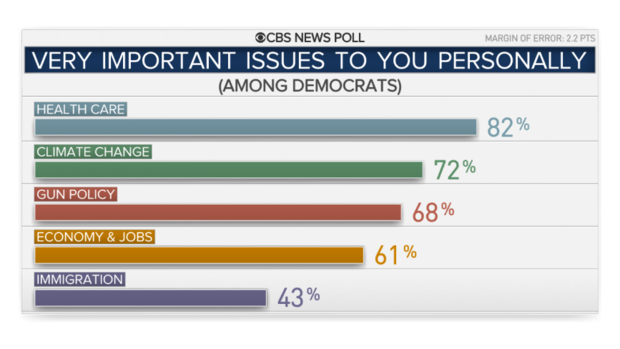 But just 20% of Republicans say climate change is very important. Instead, they are more likely to describe immigration (62%), the economy (58%), health care (54%) and gun policy (51%) as very important. 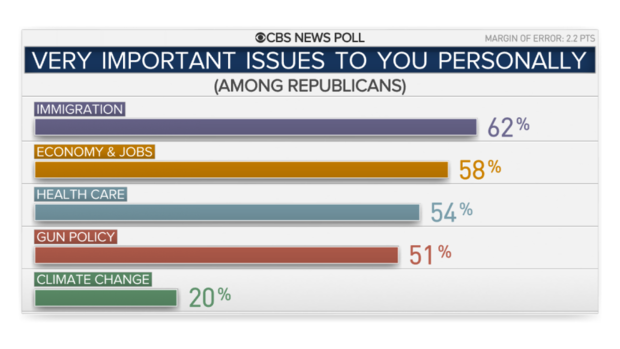 About 4 in 10 independents say climate change is a very important issue to them personally. 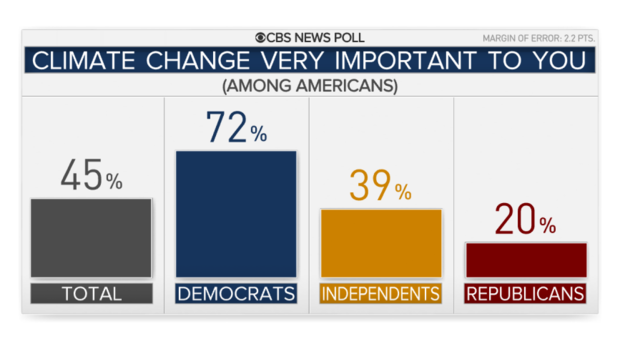 For just under a quarter of Americans (22%), a candidate's stance on climate change is a make-or-break matter: They say a candidate must share their own views on the issue in order to earn their vote. For another half of Americans, climate change will be among many factors they consider in a candidate. Another third won't be considering the issue. 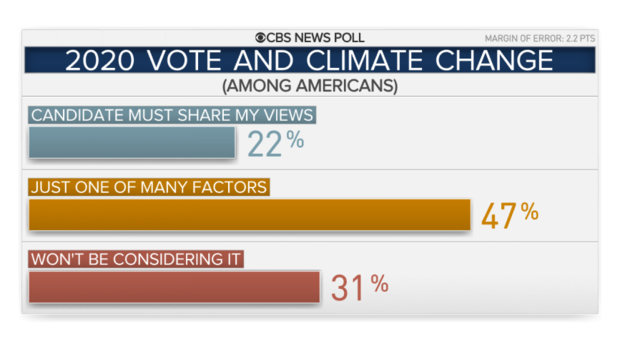 Democrats are more likely than Republicans to say they will only vote for a candidate who shares their views on climate change. By contrast, nearly half of Republicans say they won't be considering the issue much. 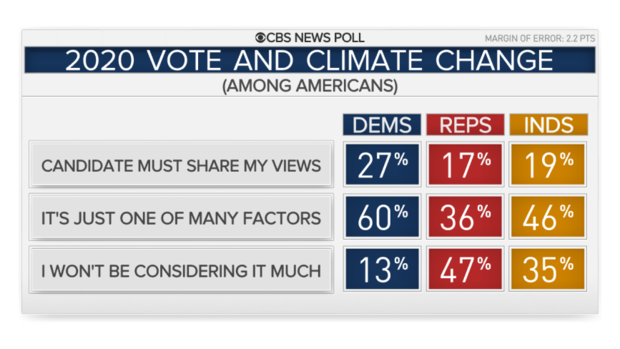 These partisan splits are also related to views on the impact and causes of climate change. Republicans are much more likely than Democrats to think climate change is caused by natural patterns, and just over a third of Republicans consider climate change to be a serious problem or a crisis.

Trump and political parties on handling the environment

Americans overall have relatively more confidence in the Democratic Party than the Republican Party on the issue of the environment. 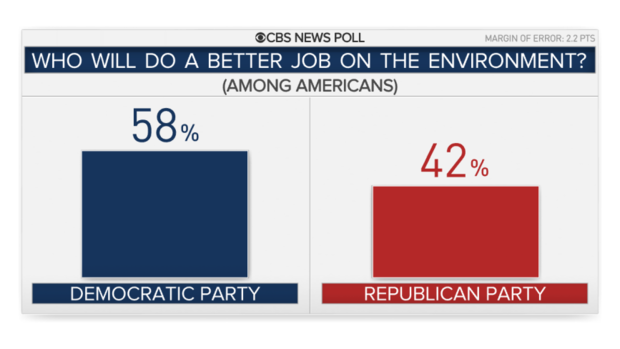 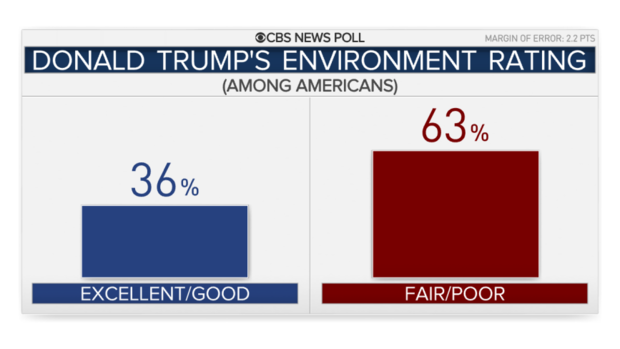 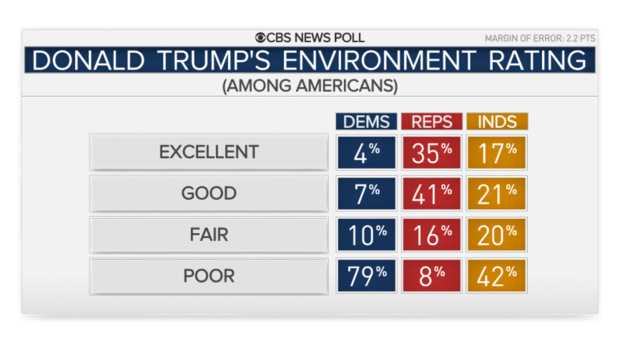 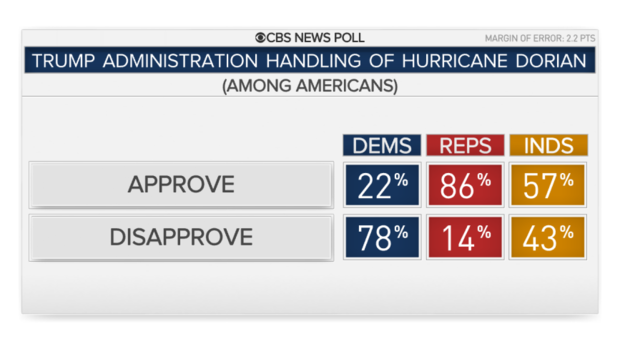 Despite the overall edge the Democratic Party has on handling the environment, one particular plan being advanced by some Democratic leaders — the "Green New Deal" — is met with skepticism from many Americans. Just 15% of Americans describe the Green New Deal as a good plan that encompasses what's needed to address climate change. Another 26% say it is has both good and bad things in it, but they believe it could start discussions on climate change. Twenty-four percent say it is a bad plan and not what is needed to address climate change, while about a third haven't heard enough about it to form an opinion yet. 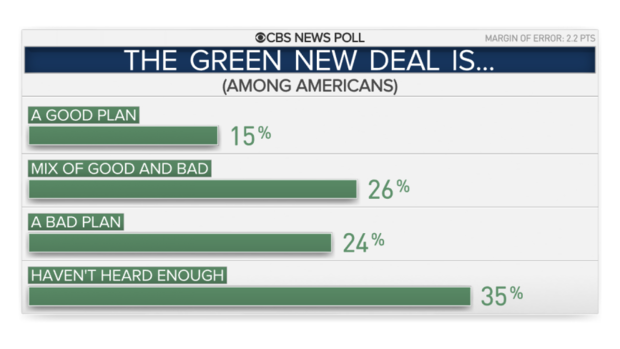 Even among Democrats, few endorse the plan completely. Just 25% say the Green New Deal is what's needed to address climate change, while 36% think it is a mix of good and bad, even if it could start discussions. Many haven't heard enough about it yet to form an opinion. The plan finds the greatest support from the most liberal wing of the Democratic Party. 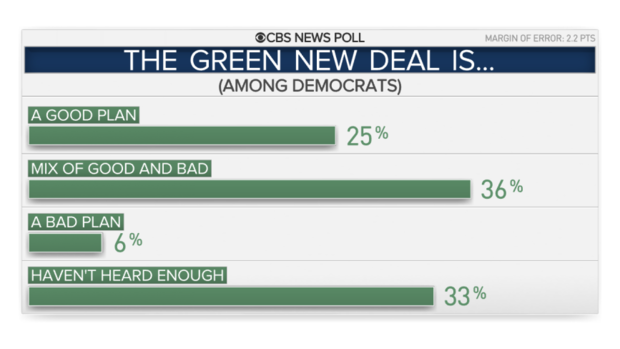 This CBS News Poll is being released as part of Covering Climate Now, a collaboration of more than 250 news outlets around the world providing in-depth coverage of the climate story.

The CBS News survey is conducted by YouGov using a nationally representative sample of 2,143 U.S. residents interviewed between September 6 and 10, 2019. This sample was weighted according to gender, age, race, and education based on the American Community Survey, conducted by the U.S. Bureau of the Census, as well as 2016 presidential vote and registration status. The margin of error is 2.2 points.