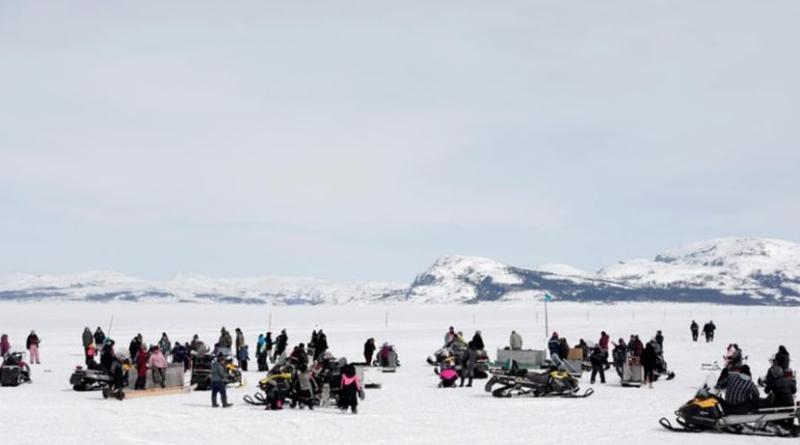 NAIN, Newfoundland : Rex Holwell has spent his life on the sea ice that forms each winter off the coast of Newfoundland and Labrador in eastern Canada. Like other Inuit, he learned to hunt seals and fish from his father and other men. They would skim over the sea ice, first on dog sleds and then, by the time Holwell started accompanying them, on gasoline-powered skidoos. Holwell wants this life – and freedom – for his children.

Climate change is about to upend it all.

“It’s going to be a loss of culture,” says Holwell. “They’ll identify as Inuit and so will their children, but they won’t have the same experiences."

As droughts last longer and heat waves, flooding and storms intensify in an ever-warmer world, the Inuit are doing what they have always done: adapt.

For the past three years, Holwell, 47, has helped run a sea ice monitoring program for the Inuit. Unlike other climate data efforts, this one is completely focused on the needs of the local community. The program is called SmartICE and pairs traditional Inuit knowledge with data collection buoys and electromagnetic sensors to give northern communities real-time measurements of sea ice thickness along their ice "highways" through a website, downloadable phone app or Facebook. It highlights areas with thicker ice and those with thinner ice.

SmartICE is used by more than 30 Inuit communities. The idea is to use the technology to fill in where climate change has made traditional knowledge less reliable or created conditions the Inuit have not faced before.

Holwell believes tools like SmartICE can extend the time the Inuit have left on the sea ice before it disappears. A new analysis published in Nature Communications Earth and Environment in August showed that the Arctic warmed nearly four times as fast as the global average between 1979 and 2021 – far faster than the two or three times the global average usually cited.

Separate modelling by experts in the United Kingdom, Canada and the United States shows that as soon as 2035, Arctic sea ice might drop below 1 million square kilometres during the summer. Scientists recorded this year's sea ice minimum on Sept. 18, which was tied for the tenth lowest on record.

The Inuit are practical when it comes to new technology. They use GPS but still teach their children how the prevailing winds cause the snowbanks to lean and point the way home if the device’s batteries die. Skidoos, also known as snowmobiles, have mostly replaced dog sleds and have compressed week-long hunts into day trips. Rifles have replaced harpoons.

SmartICE is another tool. And so with a black-and-red skidoo, a rifle and an electromagnetic sensor, Holwell offers a vision of survival that joins the old and the new.

"We have to adapt to climate change," he says. "We're going to need more tools like SmartICE."

If the weather is good, a 19-passenger Twin Otter plane flies to Holwell's hometown of Nain. No carry-ons are allowed. If a bag weighs more than 50 lbs (23 kg), it might be left behind for the next flight, or the flight after that if the planes are overweight. There is no de-icer in Nain - or in any of the coastal Inuit communities in Labrador - so the planes are often grounded. An elderly couple who was stuck in Goose Bay in mid-April say the longest they've waited for a flight was three weeks. The delays are especially bad in the spring, when the fog can be thick and unpredictable, they say.

In Nain, cars and trucks sit in front yards mounded with snow, while skidoos zoom along the slushy streets picking children up from school and bringing adults to work. There is only one hotel in town – the Atsanik Hotel – which is also the only restaurant in town. Toilet paper, which comes in bundles of 30 rolls, costs CUS$40 (US$29).

More than Nain itself, it's the landscape around it that is home, says Jim Anderson.

"That’s one thing people don’t understand," says Anderson, 70. "We get culture shock as soon as we go out. We get lost. (We're) not used to when you can see all the houses – houses end-on-end with no open spaces."

For CUS$60 in gas, a hunter can kill a seal and feed a family for three or four days, plus make mittens, boots and other clothing out of the animal's skin. Shipping in an equivalent amount of store-bought food costs CUS$300 and clothing isn't included. The sea ice makes life more affordable.

The sea ice also means freedom. Most people can't afford a boat so in the summer their world literally shrinks and becomes hostile with bugs. But in winter and spring, when the sea ice is frozen, people can fish, hunt, get wood and visit their cabins.

Maria Merkuratsuk, who was raised in a cabin north of Nain, says she feels "tingly" when she is out on the ice. "I feel at peace, I can breathe … if I have a lot on my mind, my body can take over … I (can) just drive and drive and drive and think about things," she says.

Isaac Kohlmeister, one of the last two people in Nain to run a dog sled team, says being out on the ice has helped ground him.

"When the dogs are running, you can feel everything," he said. "You can feel the fish under the ice, even."

The Inuit communities Holwell is working with for SmartICE have started compiling their own lists of Inuktitut words for different types of sea ice. In Nain, they've come up with 37, which they plan to publish in a booklet next year.

There are two parts to the SmartICE program. The first are 9-foot (2.75-metre) tall "SmartBUOYs" deployed in holes drilled through the sea ice at the beginning of the season and removed at the end of the season. The buoys are filled with thermistors, which can be used to measure temperature and record data at specific locations. The sea ice thickness is calculated from the difference in temperature between the atmosphere, snow, ice and saltwater.

The second part of the program are "SmartKAMUTIK" sleds pulled behind skidoos. The sled carries a plywood box with an electromagnetic sensor. As the skidoo pulls the sled, the sensor sends out electromagnetic pulses to induce a current and measure the thickness of the snow and ice. Holwell typically makes a SmartKAMUTIK run once a week to check the thickness of Nain's sea ice "highways."

The technology the Inuit are using is the same as what some climate scientists use, but the questions are different. The scientists are mostly asking system-level questions, like what happens next for the planet; the Inuit have more immediate concerns, like whether they will fall through the ice if they go hunting or to visit friends and relatives. The Inuit need more granular data, and sampling locations that might be different from where scientists would choose. But increasingly it's projects that address both scales of concern that are finding support.

Katie Winters, 54, who lives in Nain and helped translate the Inuit land claim agreement in Labrador, says even though the sea ice is thicker this year, it has been one of the worst years for people falling through the ice. She immediately names five people and two skidoos that have fallen through the ice this year but says there are more. Luckily no one died.

A community management committee tells Holwell where the SmartBUOYs should go, and as the temperatures warm in the spring, he uses the SmartKAMUTIK to carefully check locations that are known to be dangerous.

Holwell trains anyone who is interested in how to make the SmartKAMUTIK runs and teaches teenagers how to build SmartBUOYs during the summer off-season. The team posts every run on the program's SIKU website and app, and on Facebook. It's not clear how much people in the community rely on the data but they "like" and comment on the posts.

For people without an internet connection, Holwell prints off maps with ice thickness measurements, and, because everyone hunts, marks the maps with symbols where animals were spotted or harvested.

SmartICE got CUS$400,000 (US$293,000) in seed funding from the Arctic Inspiration Prize, the biggest annual prize in Canada. It's won other prizes too, and has slowly been gaining international recognition.

Holwell's pride in the project is obvious. "We’re a production facility in Inuit lands, with Inuit people building the technology for other Inuit," he says.

Ask anyone in Nain about the sea ice and they say they're seeing the effects of climate change first-hand. The sea ice used to be 5-7 feet (1.5 to 2.1 metres) thick, hard and covered with a thick layer of snow. Now it's 3-4 feet thick and soft, says Ron Webb, 65.

The snow is sugary with a glittery coating - "crappy snow," Webb calls it. The huge blue chunks of multi-year ice that used to float down from the north are gone and summer tides are stronger, he says.

Last year, Webb was driving his skidoo on 3 feet of sea ice. It felt good but he shoved a stick into it just to check and the stick went through to open water.

“Years ago you wouldn’t have that. That’s kind of scary because even though the thickness is there, the hardness is not," he says.

Webb laughs. The Inuit in Nain call themselves "Sikumiut" or “people of the sea ice” but he has started joking that they should make another adaptation – switch to using hovercraft – to navigate sea ice too dangerous for a skidoo.

Spring is the best time to be out on the sea ice. The days are longer but nights are still cold enough to freeze. In April, for example, temperatures usually drop to minus 10 and minus 15 Celsius (5 to 14 Fahrenheit) overnight – but this year temperatures hovered around zero.

"Usually, it’s like a heart monitoring machine – up and down – but it’s been flatline warm the whole month of April,” says Joey Angnatok, a former program coordinator for SmartICE.

Communities living on freshwater lakes and rivers in northern Canada have begun asking about SmartICE. Holwell says Sami caribou herders and others in Sweden, Finland, Iceland and England have also asked about the technology.

“We’re needed, Team Canada, we’re needed,” says Holwell. Then, like a small town auctioneer or a politician on a stump speech, he delivers his pitch: “We want Joe in Tuktoyaktuk to be a SmartICE champion.”

A little later he heads out on his skidoo, flying across the sea ice like a giant tundra bumblebee in the brief sub-Arctic spring – joyful, free, with no question of his place in the world.

Opening the throttle, he speeds toward the horizon where the geese and seals are, deeply certain that his tiny Inuit town on the edge of the sea ice matters, and that now the rest of the world knows it too.

Note: Melissa Renwick is one of the winners of the Reuters Yannis Behrakis Photojournalism Grants