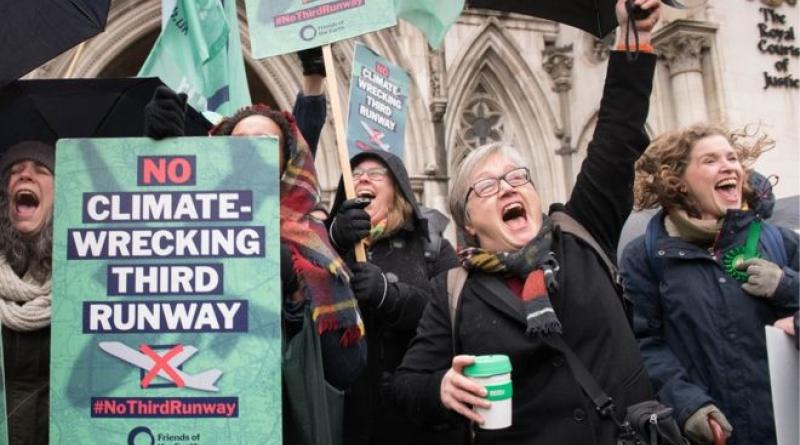 Controversial plans for a third runway at Heathrow Airport have been thrown into doubt after a court ruling.

The government's decision to allow the expansion was unlawful because it did not take climate commitments into account, the Court of Appeal said.

The judges said that in future, a third runway could go ahead, as long as it fits with the UK's climate policy.

The case was brought by environmental groups, councils and the Mayor of London.

There were "whoops and jumps of jubilation from environmentalists outside the court room" after the judgement, BBC environment analyst Roger Harrabin reported.

Transport Secretary Grant Shapps tweeted that the government would not appeal against the ruling.

In an interview, he said that it was "for Heathrow and the courts to decide" whether the expansion should go ahead.

"This government is absolutely committed [from] the Prime Minister down to airport expansion, but, we want to make sure that expansion is environmentally friendly," he said.

Heathrow chief executive John Holland-Kaye said the airport would challenge the court's decision at the Supreme Court, saying: "We think the appeals court got it wrong".

"We have a very strong legal case, and we will be making that very firmly," he said.

He said in the meantime Heathrow would work with government on a review of its policy "to make sure we can demonstrate expansion is compatible with the Paris accord on climate change".

"I'm confident that this issue is fixable, and we can work with the government to get on and deliver the expanded Heathrow that Britain needs," Mr Holland-Kaye added. "Without Heathrow expansion, there will be no global Britain."

Friends of the Earth, one of the environmental groups that brought the case, said the ruling was "an absolutely groundbreaking result for climate justice".

Will Rundle, head of legal at the campaign group, said: "This judgment has exciting wider implications for keeping climate change at the heart of all planning decisions.

"It's time for developers and public authorities to be held to account when it comes to the climate impact of their damaging developments." 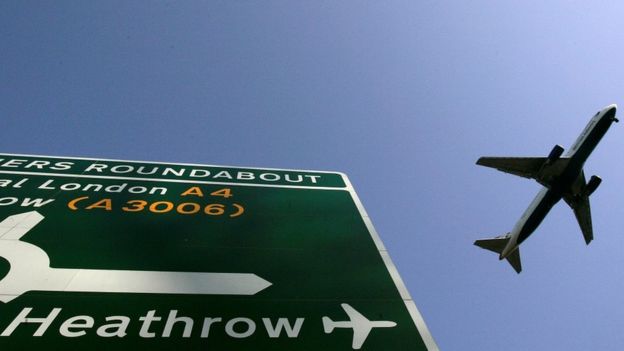 Greenpeace UK's executive director, John Sauven, said: "The third runway is already on its knees over costs, noise, air pollution, habitat loss and lack of access, and now Heathrow has yet another impossibly high hurdle to clear.

"Boris Johnson should now put Heathrow out of its misery and cancel the third runway once and for all. No ifs, no buts, no lies, no U-turns."

MPs voted overwhelmingly to support Heathrow expansion in 2018, with Boris Johnson out of the country at the time.

Before he became prime minister, Mr Johnson pledged in 2015 to lie down "in front of those bulldozers and stop the building, stop the construction of that third runway" at Heathrow. 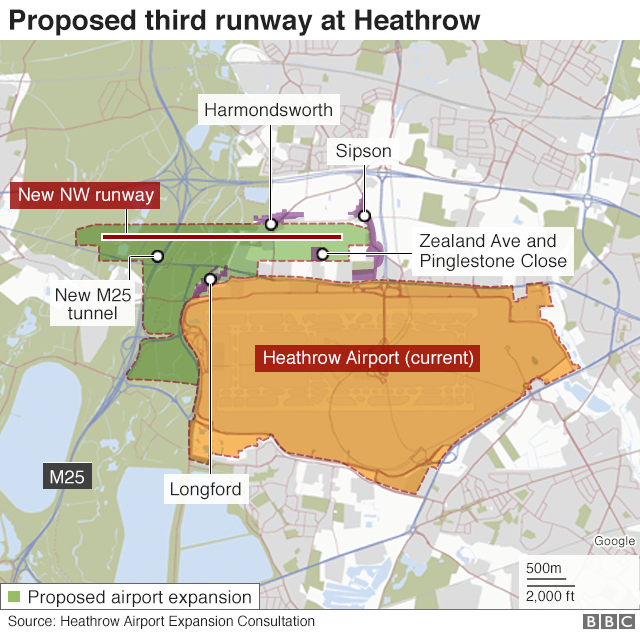 Reacting to the Court of Appeal's decision the government hardly sounded enthusiastic about Heathrow expansion.

Transport secretary Grant Shapps was repeatedly asked whether ministers still backed a third runway, he talked instead about "overall airport expansion." Plus, the government's not going to appeal the decision, leaving it to others.

Some think this is a sign that the project is about to be cancelled, but there's an alternative explanation for the reticence. For years Boris Johnson campaigned against the development, so joining a court action to push it through risks accusations of hypocrisy.

Privately, senior ministers say they're not looking at alternatives and if Heathrow wins its appeal at the Supreme Court then it will go ahead. For now the government can watch from a distance. If the case is lost, however, there will be some difficult decisions to make, because so many Conservative MPs and businesses think that airport expansion is essential.

The Court of Appeal found that the government had not followed UK policy when backing the controversial expansion plans.

It said that the government had a duty to take into account the Paris climate agreement, which seeks to limit global warming.

It was "legally fatal" to the government's Heathrow expansion policy that it did not take those climate commitments into account, the judges said.

The British Chambers of Commerce (BCC) said business communities in the UK would be "bitterly disappointed that plans for a world-leading hub airport are now at risk".

Industry lobby group the CBI said that while "all major projects must be consistent" with net zero carbon emissions by 2050, "it's clear that the government and aviation industry need to work closely to agree a robust decarbonisation plan".

However, it said it was "vital" that the Heathrow project be kept "on track".

But airline group IAG, which owns British Airways, said: "We have always said the environmental impact and cost of Heathrow expansion needs independent review. The airport cannot be trusted. Its original £14bn cost for expansion is now £32bn."