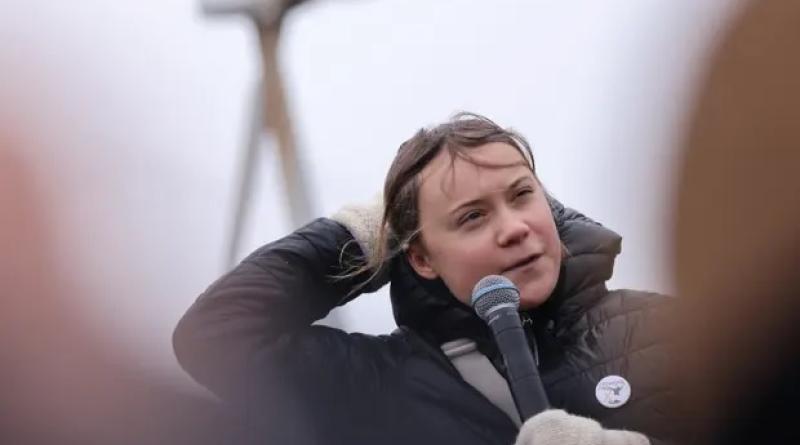 ‘Cease and desist’ letter signed by over 650,000 people sent to oil and gas CEOs follows removal of Greta Thunberg from coal protest

Hundreds of thousands of young climate activists have said they will continue “protesting in the streets in huge numbers” against fossil fuels, a day after Greta Thunberg was removed by German police from a condemned village atop a massive coal deposit.

In a cease-and-desist letter to the CEOs of fossil fuel companies, youth campaigners accuse them of a “direct violation of our human right to a clean, healthy, and sustainable environment, your duties of care, as well as the rights of Indigenous people”.

“This cease-and-desist notice is to demand that you immediately stop opening any new oil, gas or coal extraction sites, and stop blocking the clean energy transition we all so urgently need,” the letter says.

Already signed by more than 650,000 people, the letter goes on: “Big Oil knew for decades that fossil fuels cause catastrophic climate change, misled the public about climate science and risks, [and] deceived politicians with disinformation sowing doubt and causing delay.”

The letter warns that failure to act would mean citizens around the world would consider taking “any and all legal action” to hold the companies accountable. “And we will keep protesting in the streets in huge numbers,” it says.

Signatories included Vanessa Nakate from Uganda, Greta Thunberg from Sweden, Helena Gualinga from Ecuador and Luisa Neubauer from Germany. They say: “It feels extremely difficult to keep hope alive in the face of climate devastation around the world. But our hope lies in people – in the millions of us who are determined to come together and demand action. It’s time to put these CEOs on notice – showing them that 2023 will be a watershed moment for accountability.”

On Sunday, Thunberg was “grabbed and carried away” by two police officers in riot gear evicting climate activists in Lützerath, Germany, Bild reported. She was among thousands protesting in and blockading the village, which has been earmarked for demolition to make way for an opencast coal mine. “We need to keep the carbon in the ground and Germany is really embarrassing itself now,” she said.

The call comes as the UK seeks new powers to stop radical climate activists who have shut down roads, bridges and oil terminals and targeted art galleries and sporting events in a months-long campaign of civil disobedience. Politicians were infuriated last month when the group switched tactics and police were forced to facilitate their slow marches disrupting motor traffic in central London.

A new amendment to a public order bill would empower police to stop such protests by broadening the threshold for “serious disruption” to include “long-running campaigns”. In such cases, police “will not need to wait for disruption to take place” before shutting down protests. No 10 said the new powers would “give police officers absolute clarity over when they should step in”.

Lawyers warned of considerable ambiguity around the definition of “serious disruption”, introduced in last year’s Policing Act, and said the new powers could amount to de facto bans on certain groups. Extinction Rebellion, Insulate Britain and Just Stop Oil are named in government briefings for the new bill.

Tom Wainwright of Garden Court chambers, who specialises in protest cases, said: “The government make it quite clear who they are targeting, and if the police are allowed to lump together disparate protests which operate under the same or a similar banner, then they are very likely to effectively close down particular groups.

“You could end up with almost a de facto blacklist, and treating protest groups like proscribed organisations, like terrorist organisations.”

Kirsty Brimelow, a barrister with Doughty Street chambers, who is chair of the Criminal Bar Association, said the amendment failed to provide police with the clarity they had asked for. “Many respected charities head long-running campaigns which ultimately are in the public interest,” she said. “This proposed restriction therefore appears overly broad and in itself unclear.

“There already is civil law in the form of injunctions available for pre-emptive action. Of course, a balance must be struck [between the right to protest and] the rights of others, but those decisions are decided by magistrates and courts every day.”

A study published last week found that scientists at oil giant Exxon privately made “breathtakingly” accurate climate predictions in the 1970s and 1980s, only for the company to go on to publicly dismiss global heating. The International Energy Agency concluded in 2021 that there could be no new oil- or gasfields or coalmines if the world was to reach net zero by 2050. A Guardian investigation in May showed how the world’s biggest fossil fuel firms were quietly planning scores of “carbon bomb” oil and gas projects that would drive the climate past internationally agreed temperature limits.

COVER PHOTO: Greta Thunberg speaks during a protest against the expansion of RWE's Garzweiler opencast lignite mine in Lützerath, Germany, on 14 January. Photograph: Thilo Schmülgen/Reuters

Greta Thunberg calls for protest against expansion of German coalmine

Have no doubt: opening a coalmine in Cumbria is a climate crime against humanity