The Catch-22 of the US military’s climate plans 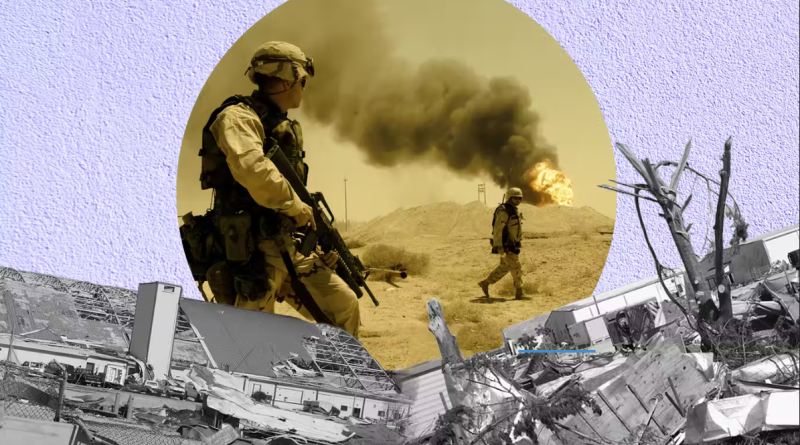 In response to the devastating wildfires which engulfed California in summer 2020, the United States Air Force sprung into action.

Four massive military C-130 Hercules aircraft were deployed to dump their 3,000-gallon tanks of retardant again and again, to try to hold back the monster blazes and give ground fire crews a fighting chance.

At the same time, Travis Air Force Base, the busiest military air terminal in the US located north of San Francisco, was evacuating dozens of planes and non-essential personnel as the huge LNU Lightning Complex Fire raced closer.

“The main thing was everyone was safe. No one got hurt, and the aircraft got out of here safely,” Bryan McFeron, crew chief of the 860th Aircraft Maintenance Squadron C-17, said after what was, by all accounts, a daring operation.

The split-screen operations are a snapshot of how climate change could unfold for the US military in coming decades: with troops increasingly responding to disasters caused by global warming while simultaneously being vulnerable to its impacts.

Military chiefs have been increasingly candid about what the ever-worsening spiral of heatwaves, wildfires, droughts, and floods means for US missions, bases and installations (the catch-all term for camps, posts and stations).

A 2019 Department of Defense study of 79 installations found two-thirds were at risk of ongoing flooding and half threatened by wildfires or drought. Among those incidents was $500m flooding damage at Offutt Air Force Base in Nebraska. Months earlier, Hurricane Florence roared through Camp Lejeune in North Carolina, leaving $3.5bn damages in its wake.

In its recently-published strategy to cut emissions, the US Army describes climate risks as “broad, significant and urgent”, and highlights impacts on supply chains, infrastructure, and the safety of soldiers and their families.

The Army says it will cut its emissions by installing renewable power micro-grids across all bases by 2035, and ensure that its non-tactical fleet – those not involved in combat – is fully electric the same year.

The military branch already has 950 renewable energy sites up and running, including a solar field at Kentucky’s Fort Knox, and arguably the largest battery storage system in the US at Fort Carson in Colorado. New training will be rolled out so troops are “ready to operate in a climate-altered world”.

The Air Force is expected to release its climate action plan later this year, along with the US Navy and Marine Corps which are coordinating on a strategy. President Joe Biden has pledged a “whole-of-government” approach to cutting domestic emissions in half by 2030 (from 2005 levels), and setting the country on a path to net-zero by 2050.

It won’t be an easy lift. If it were a country, the US military would be the 47th largest emitter globally, landing between the annual domestic emissions of Peru and Portugal based on fuel use alone, a 2019 study found. In 2017, the military was purchasing more than 269,000 barrels of oil a day. And as yet, there’s no viable alternative for jet fuel, which makes up the bulk of US military emissions.

To play its part in reducing that heavy carbon footprint, the Army has pledged a 50 per cent reduction in net greenhouse gas pollution, from 2005 levels, by the end of the decade.

Professor Neta C Crawford, political science chair at Boston University and co-director of the “Costs of War” project which researches post-9/11 conflicts, said the target was not ambitious enough, estimating that the US Army had likely already reduced its emissions by about half since 2005.

“To put it in context, the United States was in a ‘hot war’ in Afghanistan and Iraq in 2005, so those emissions were high,” she told The Independent. “The [Army] says the problem is broad, significant and urgent. This is not a document that signifies an urgent response.”

The US Army did not respond to requests for comment from The Independent.

There’s another problem: President Biden’s executive order to cut federal emissions actually exempts large parts of military operations which since 2001, has made up 77-80 per cent of all US government energy use, according to a 2019 study from the “Costs of War” project. (Exempting large parts of military operations from emission counts is common practice in most countries).

And yet climate change is widely understood in military circles to be a “threat multiplier” – one which builds on existing political or economic unrest to threaten peace and security.

Take war-ravaged Syria. The fingerprint of the climate crisis can be found in the excessive heat which contributed to the worst drought in 900 years from 2006-2010, decimating crops and livestock. It drove impoverished rural workers into cities and, combined with cuts to fuel and food subsidies rolled out by dictator Bashar al-Assad, tensions between ethnic groups exploded. More recently in Somalia, the third, climate-linked drought in a decade has gripped the country forcing millions to leave their homes seeking food and water, and giving rise to conflict.

Tensions are also rising at home in the US. A mega-drought in the US West shows little signs of abating, leading to increasingly fractious debates, and several legal fights, over water rights.

At the global level, (including the new UN climate report this week) alarm is at fever pitch on the need to urgently curb global temperature rise by every fraction of a degree possible, and slashing emissions from fossil fuels is critical. UN Secretary-General Antonio Guterres called continued investing in fossil fuels “moral and economic madness”.

John Kerry, President Biden’s Special Envoy for Climate, and former US Secretary of State, appeared to agree. “The stakes are clear. Complacency will be met by irreversible and unthinkable impacts from climate change,” Sec Kerry said in a statement.

But the US’ vast military machine looks set to grow, in part as a response to Russia’s brutal invasion of Ukraine. President Biden’s budget for fiscal year 2023 includes a request for an extra $30bn for the Pentagon, taking defense spending to $813bn.

Dr Patrick Bigger, who co-authored a study on the US military’s use of hydrocarbons at Lancaster University Environment Centre, called its climate policy “fundamentally contradictory – confronting the effects of climate change while remaining the largest single institutional consumer of hydrocarbons in the world, a situation it is locked into for years to come because of its dependence on existing aircraft and warships for open-ended operations around the globe”.

“An important way to cool off the furnace of the climate emergency is to turn off vast sections of the military machine,” his co-author Professor Ben Neimark added.

Decarbonizing the US military isn’t really possible without cutting back on operations and training, both in the US and overseas, Dr Crawford said.

“A national security strategy should be in line with the sense of urgency that the Biden administration feels about the risks and the costs of climate change, and therefore actually engages in a wholesale reconsideration of US strategy, bases, operations, and arms control,” Dr Crawford said.

“It becomes imperative not to fight because once you start fighting, your emissions go way up.”

So far, the US military response to climate change has been expansion. In March, thousands of American troops took part in new training ops in the Arctic in response to Russia’s growing militarization in an area with untapped oil, and where melting sea ice has cracked open new shipping routes. The polar region is seeing changes at two to three times the rate of the rest of the world due to climate change.

The US is also ramping up military activities in the Indo-Pacific region. Past US defense reports have emphasized how the world will become much more dangerous due to climate stresses, anticipating more tensions and potential armed conflict, which reveals a “disconnect between cause and effect”, Dr Crawford points out.

“All of this is heightening our fear, and when we’re afraid, we arm, we prepare, our countries become lifeboats. It’s counterproductive,” she added.

“By assuming that the nightmare is fait accompli, we make it more likely.”