Carbon emissions from fossil fuels will hit record high in 2022 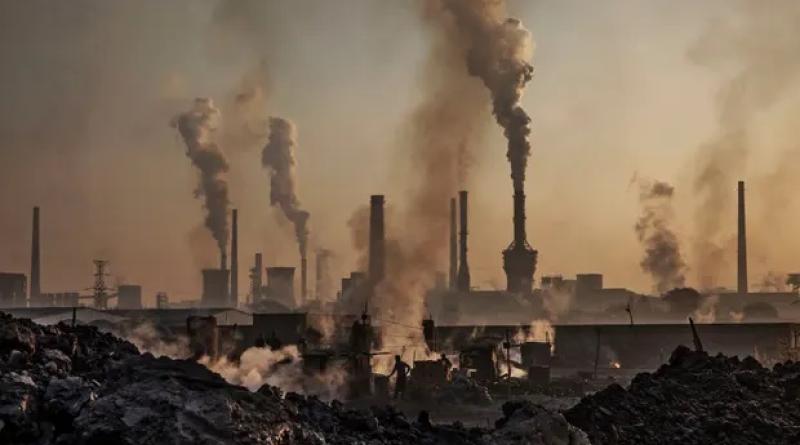 30 11 2022 | 10:59Damian Carrington Environment editor
Nearly 200 countries gathering for the U.N. climate conference in Egypt are expected to lock horns over whether rich nations should pay compensation to vulnerable states hit by climate-fuelled disasters.

The COP27 summit follows a year of such disasters, from floods that killed more than 1,700 people in Pakistan to drought withering crops in China, Africa and the U.S. West. That has intensified developing country demands for a special "Loss and Damage" fund. But with rich countries resi ..

Read more at:
https://economictimes.indiatimes.com/world/europe/explainer-cop27-what-is-loss-and-damage-compensation-and-who-should-pay/articleshow/95332522.cms?utm_source=contentofinterest&utm_medium=text&utm_campaign=cppst
Nearly 200 countries gathering for the U.N. climate conference in Egypt are expected to lock horns over whether rich nations should pay compensation to vulnerable states hit by climate-fuelled disasters.

The COP27 summit follows a year of such disasters, from floods that killed more than 1,700 people in Pakistan to drought withering crops in China, Africa and the U.S. West. That has intensified developing country demands for a special "Loss and Damage" fund. But with rich countries resi ..

Carbon emissions from fossil fuels will hit record levels this year, according to a comprehensive analysis. The finding represents a brutal contrast with the need to cut emissions by half by 2030 to restrict global heating to 1.5C and avoid the most devastating impacts of the climate crisis.

There is no sign of the decline needed, the researchers said, heaping further pressure on the countries whose representatives are meeting at the UN Cop27 climate summit in Egypt to deliver real and rapid action. Other scientists described the news as “bleak” and “deeply depressing”. 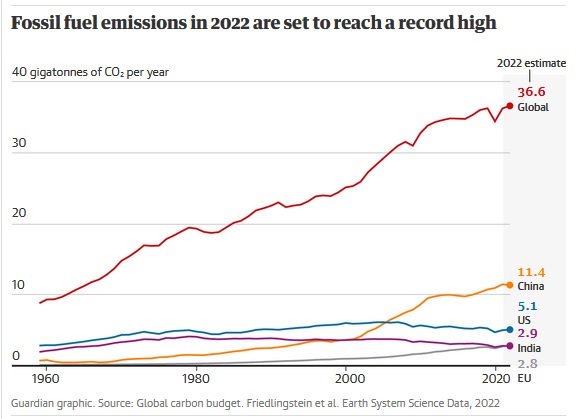 A glimmer of hope comes from assessment of emissions from the destruction of forests. These have been declining slowly over the last two decades, though largely because of more new trees being planted rather than fewer being felled.

When this decline is taken into account, global carbon emissions have been essentially flat since 2015. However, until emissions actually start falling, huge amounts of heat-trapping carbon dioxide are still being pumped into the atmosphere every year.

The UN secretary general, António Guterres, has made clear to world leaders at Cop27 this week what this means: “We are in the fight of our lives and we are losing. Our planet is fast approaching tipping points that will make climate chaos irreversible. We are on a highway to climate hell with our foot on the accelerator,” he said.

The analysis by the Global Carbon Project (GCP) uses multiple streams of data from the year to date to estimate emissions for 2022. It found fossil fuel related CO2 is on course to rise by 1% to 36.6bn tonnes, the highest ever. More burning of oil products is the biggest contributor, mostly because of the continuing rebound of international aviation after the pandemic.

Continued emissions at this level would make 1.5C of global heating become more probable than not in the next decade, the researchers said. Reaching net zero carbon emissions by 2050, as pledged by many countries, now requires an annual decrease comparable to the sharp fall in 2020 due to Covid-19 lockdowns.

Emissions from coal will return to the all-time peak seen in 2014, the analysis found. But unlike in the past, this is not driven by China but by India and the European Union. Gas burning remained level, but at the same record level seen in 2021.

Emissions from China, the world’s biggest polluter, will decrease by 1% in 2022, the GCP found, because of the country’s stringent Covid restrictions and a collapse in the construction industry. The EU will also see a similar decrease because the 7% rise in coal emissions has been offset by a 10% fall in CO2 from gas consumption after Russia invaded Ukraine.

In contrast, US emissions will rise by 1.5%, with a surge in flights largely to blame. India will have the largest rise, 6%. This is due to higher coal and oil emissions, and India now emits more than the EU overall – although emissions per capita remain much lower.

“This year we see yet another rise in global fossil fuel CO2 emissions, when we need a rapid decline,” said Prof Pierre Friedlingstein, a climate scientist at the University of Exeter who led the study. “Leaders at Cop27 will have to take meaningful action if we are to have any chance of limiting global warming close to 1.5C.”

“We are a very long way from where we need to go,” said Dr Glen Peters, a GCP member at the Centre for International Climate Research (Cicero) in Norway. “Many countries, cities, companies, and individuals have made pledges to reduce emissions. It is a stark reminder that despite all this rhetoric, global fossil CO2 emissions are more than 5% higher than in 2015, the year of the Paris agreement.

“There is clearly no sign of the decrease needed to limit climate change close to 1.5C.”

Prof Corinne Le Quéré, at the University of East Anglia, who was also part of the study, noted that the average annual increase in emissions was 3% during the 2000s but has fallen to 0.5% rise in the past decade.

“We have shown climate policy does work,” she said. “If governments respond by turbo-charging clean energy investments and planting, not cutting down, trees, global emissions could rapidly start to fall.”

A series of reports released before Cop27 laid bare how close the planet is to climate catastrophe, with “no credible pathway” of carbon cuts to 1.5C in place. With targets already in agreed at previous summits, Cop27 is hoping to drive action but the disagreements over the provision of climate finance by rich countries is proving a major obstacle.

The GCP’s 2022 analysis is published in the journal Earth System Science Data and was produced by more than 100 scientists from 80 organisations around the world. The oceans and land absorb about half of humanity’s carbon emissions. However, the GCP found this vital service was increasingly damaged by global heating, with the uptake of CO2 by the land and ocean reduced by 17% and 5% respectively over the last decade.

The GCP scientists are concerned about future emissions as well. “Given that a further recovery in oil use is expected in 2023, if coal or gas use remains flat or increases, then it is likely that global fossil CO2 emissions will continue to rise in 2023 without a concerted policy effort,” said Robbie Andrew, a senior scientist at Cicero.

Prof Vanesa Castán Broto, at the University of Sheffield, said: “The results of the [analysis] are bleak. Carbon emissions are continuing to rise, and if this continues, climate change will reach a very destructive stage in a single decade.”

“The report is deeply depressing,” said Prof Mark Maslin, at University College London. “It sends a clear message to the leaders at Cop27 – the world needs to have significant cuts in global emissions in 2023 if we are to have any chance to keeping climate change to 1.5C.”

As carbon emissions rebound after COVID-19 dip, talk of building back better may ring hollow