Canadian heatwave: Why are some of the planet’s coldest areas getting hotter? 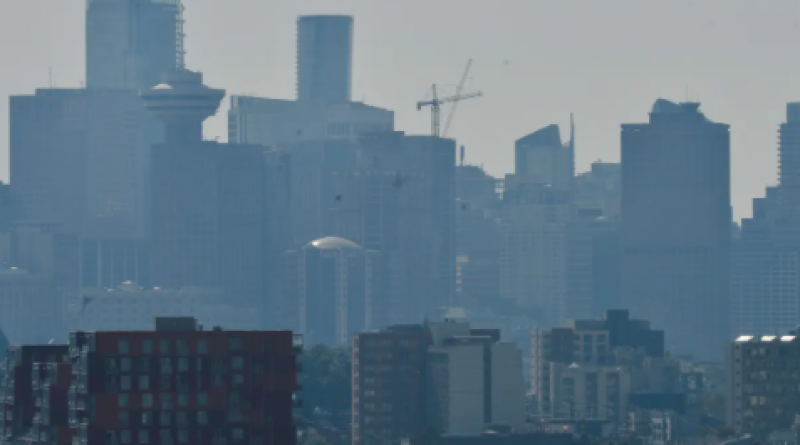 Why are we asking this now?

Parts of Canada, the US Pacific Northwest and the Arctic Circle are suffering sweltering heatwaves that have already caused dozens of sudden deaths.

The baking conditions in regions better known for their hard winters are breaking local temperature records and making everyday life “intolerable”, rendering it “almost impossible” to venture away from air conditioning, as one British Columbia resident toldThe Globe and Mail.

The phenomenon is being attributed by meteorologists to a “heat dome” lingering over the northern hemisphere and trapping concentrations of hot air in place. Climate scientists say this is evidence of the ever-worsening climate crisis.

Where is this happening?

In Canada, the worst affected areas are the western provinces of British Columbia and Alberta, as well as parts of Saskatchewan, the Northwest Territories and the Yukon. Canada’s environment department has issued heat warnings for all of them.

The country recorded its all-time highest temperature for the third day in a row on Tuesday when the mercury hit a staggering 49.5C in Lytton, British Columbia.

Temperatures in the Vancouver area reached just under 32C on Monday but with the humidity it felt closer to 40C in areas that are not near water, according to Environment Canada.

The city’s police force reported 130 sudden deaths since Friday, with elderly people or those with underlying health conditions accounting for the majority of lives lost.

In the US, Seattle, Washington, and Portland, Oregon, are currently sweltering in the heat – recording temperatures well above 37.8C on Monday – as is Siberia in northern Russia.

Land temperature in the Arctic Circle region has peaked at 48C in recent days, in what has been described as a “persistent heatwave” in an area increasingly hit by wildfires and above-average temperatures.

Saskylakh, an Arctic town, recorded 31.9C on that date, according to Copernicus, the small community’s hottest temperature before the summer solstice since 1936. The EU satellites also found land surface temperatures peaking at 48C near the town of Verkhojansk, 43C in Govorovo and 37C in Saskylah on 20 June.

That follows a temperature rise above 30C in parts of the Arctic in May, much higher than average for the time of year. Climate scientists described it as “mind boggling”.

They warn that the rising temperatures are causing the ice and permafrost to melt, which in turn causes previously trapped methane to be released into the atmosphere and contributes to global heating.

What is the definition of a heatwave?

The UK Met Office defines a heatwave as “an extended period of hot weather relative to the expected conditions of the area at that time of year, which may be accompanied by high humidity”.

It goes on to explain that heatwaves are common during summer months when high pressure is most likely to build up. Heat waves are slow moving and can linger, typically lasting for days but sometimes for weeks.

As for the “heat dome” in North America, Environment Canada’s David Phillips told broadcaster CBC on Wednesday: “This dome stretches half way up to the atmosphere and it is a cap, a lid, putting a lid on top of boiling water, and inside that lid there’s no, no weather comes in, it’s just progressively warmer, and because it’s high pressure… that air squeezes each other and little air molecules jingle and jangle and create heat and it doesn’t escape - that heat stays within that kind of dome.”

What are the experts saying?

The world’s most prominent climate activist Greta Thunberg has been sounding the alarm about the heatwaves. She tweeted on Tuesday: “Heat records are usually broken by decimals, like a tenth of a degree. And not in June...This heatwave is just getting started.” 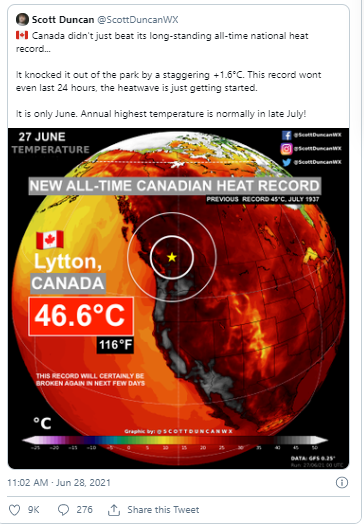 Zeke Hausfather, a California-based scientist at the climate data NGO Berkeley Earth, said the US Pacific Northwest has warmed by about 1.7C in the last half-century and commented: “In a world without climate change, this still would have been a really extreme heatwave. This is worse than the same event would have been 50 years ago, and notably so.”

Also explicit in connecting the phenomenon with the climate crisis was Washington Governor Jay Inslee, a former Democratic presidential candidate who ran on a green platform. He told MSNBC: “This is the beginning of a permanent emergency. We have to tackle the source of this problem, which is climate change.”

His counterpart in British Columbia, John Horgan, said the hottest week the province had ever experienced had led to “disastrous consequences for families and for communities”.

Are the heatwaves a one-off, or will they become more frequent and might they happen elsewhere?

However, they stress that it is usually difficult to link any one event to the earth’s increasing temperature, which is on course to rise 3C by 2100 without global action to prevent it.

Meteorologist and author Eric Holthaus notes: “Climate change is not just warming the surface of the planet, it’s warming earth’s entire troposphere – the lowest layer of the atmosphere where all our weather occurs. That’s particularly true in mountainous areas, where temperatures are rising even faster than elsewhere. When snow and ice recedes or even disappears from mountains, the bare soil beneath can warm unimpeded.”

He says that this effect, coupled with extreme drought in the western and southern US states of Oregon, Nevada, Utah, Arizona, California, New Mexico, Texas and Colorado, is enabling the heat dome.

“Dry, descending air rushing down the mountain slopes offshore towards the ocean created a literal pressure cooker, sending temperatures soaring to never-before-seen values,” he writes in The Guardian.

Heatwaves and extreme weather events are expected to continue in the coming years as some of the changes to earth’s systems are now baked in from decades of greenhouse gas emissions, largely from the burning of fossil fuels, in the atmosphere.

However nations can take steps to adapt by increasing funding for extreme weather preparedness and raising public awareness of what steps to take and where they can seek refuge when deadly heat hits.