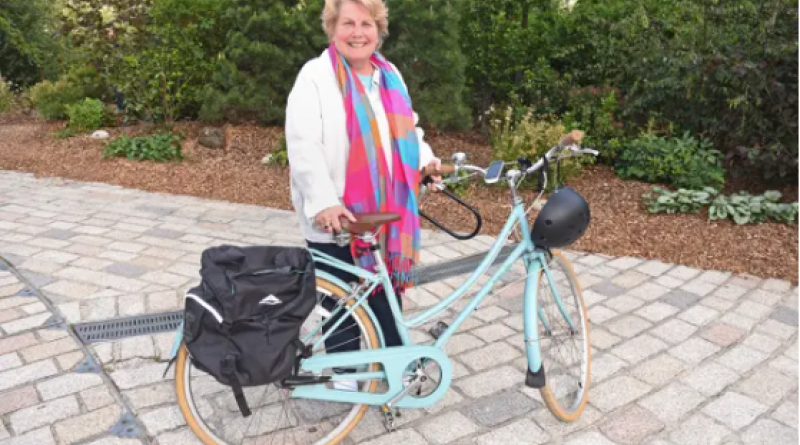 The report, from albert, a Bafta-backed sustainability project, also found that individual action, such as recycling, was far more frequently featured than issues that are much bigger drivers of the climate crisis such as energy and transport.

While terms describing the issue – climate change, climate emergency and climate crisis – had 14,540 mentions, those referring to tackling the problem – climate justice, climate action and climate solution – only had 296 mentions combined.

The report was based on analysis of subtitles from almost 400,000 programmes from all the main broadcasters, but did not include news broadcasts. It highlighted some shows that did tackle climate issues, but said the huge reach of TV shows meant the industry was critical to enabling the country to meet its climate goals and needed to do more.

Mentions of climate change and global warming fell by 10% and 20% respectively in 2020. Carys Taylor, the director of albert, said: “In any normal year, a drop in climate change mentions would be a worrying headline, but 2020 was no normal year.” She said the coronavirus pandemic had dominated the media and restrictions on filming meant more repeats and shows based on archive footage were shown. 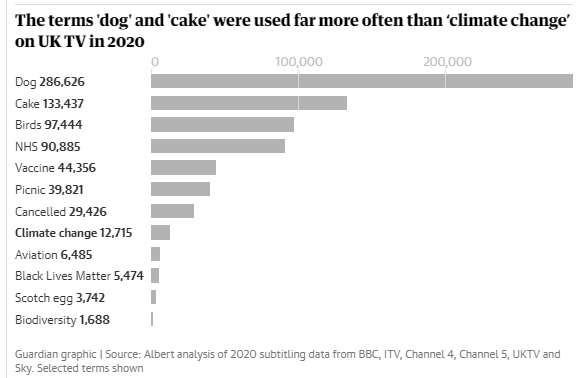 “But the TV industry is critical to tackling climate change,” she said. “Every genre and every programme can play its part [and] the creative opportunity for broadcasters to support the transition is immense. This is so profoundly important that, even if it is as simple as mentioning [climate action] in a soap, it’s going to have an effect.”

Sandi Toksvig, the president of the Writers’ Guild of Great Britain, said: “We need policies, clever technological advances and brilliant scientists to help us reach net zero, but we also need stories. They can shape us, change us and inspire us. Writers and content makers need to be at the forefront of this battle to save our planet.”

Juliet Davenport, the founder of the renewable power provider Good Energy, said: “[TV shows] have a huge power to influence and we need to be telling engaging stories about not only the scale of the challenge but the exciting benefits of the solutions.”

TV shows should focus more on the actions with the most impact, said Susie Wang of the public engagement organisation Climate Outreach. “The climate crisis bell has now been rung by the media and we have very high levels of concern – the risk is getting stuck here. We need more stories that prioritise the most effective solutions, such as reducing flights we take, trying to eat a low-carbon diet, and using less energy within our homes.

“Lifestyle changes also need to be talked about in terms of how they relate to changes to infrastructure and policies that help people make the shift to lower-carbon living. And we should be talking about inequalities in wealth that mean that some households, on all continents, consume much more than others.”

Terms for individual behaviours such as recycling, reusing, and veganism rose in prominence in 2020. But while waste disposal is responsible for only 4% of UK climate emissions, related terms were mentioned 43,715 times. In comparison, energy causes 21% of emissions, but had only 7,418 mentions. “There seems to be a correlation between a greater contribution to emissions and a lower rate of mentions,” the report said.

It highlighted shows that tackled climate issues, including the BBC’s The Great British Sewing Bee on the reuse of old clothes and Channel 4’s Meat the Family, which tackled the environmental and ethical issues of livestock farming by pairing families with animals they could then choose to eat or not.

Taylor said the last series of the motoring show Top Gear featured an electric vehicle in every episode. “It’s important we don’t tell anyone how to create anything and respect editorial independence,” she said, but added that albert was providing free education and support to empower the industry to make those creative decisions for themselves.