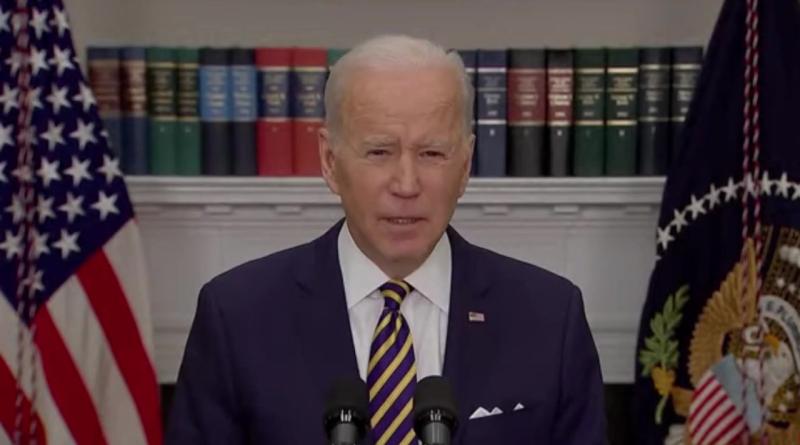 The habitually-late President Joe Biden delivered news on Tuesday worth waiting for: the United States is banning all imports of Russian oil and gas following its invasion of Ukraine.

“Sorry to keep you waiting, I was on a couple of phone calls,” President Biden told reporters gathered in the Roosevelt Room of the White House on Tuesday morning, before saying that the US “is targeting the main artery of Russia’s economy”.

The new executive order bans the import of Russian oil, liquefied natural gas, and coal to the US. Mr Biden said the decision was made in close consultation with allies and other global partners, and had strong bipartisan support in Congress and, he believed, throughout the states.

“Americans have rallied to support the Ukrainian people and made it clear we will not be part of subsidizing Putin’s war,” Mr Biden said.

He also used the moment to underline the need for the US to become a clean energy economy, ensuring energy independence alongside tackling global warming.

The president has promised a clean energy grid by 2035, while rolling out massive investments in electric vehicles and infrastructure to achieve net-zero by 2050.

“But transforming our economy to run on electric vehicles powered by clean energy with tax credits to help American families winterize their homes and use less energy, that will help.”

Transitioning away from fossil fuels entirely means that “no one has to worry about the price at the gas pump in the future”.

“That’ll mean tyrants like Putin won’t be able to use fossil fuels as weapons against other nations,” he added. “This is the goal we should be racing toward.”

Although there are encouraging signs, there is a long road to go. Electric vehicles made up only 4 per cent of US sales last year, lagging behind China and Europe.

Petroleum and gas remain the most consumed sources of US energy but renewables like wind and solar are the fastest-growing. The share of US electricity generation from renewable energy is forecast to rise to 22 per cent this year.

Bill McKibben, environmentalist and founder of the non-profit 35.org, called the Biden administration’s announcement “potentially, a turning point for the world”.

“If we use it to wean ourselves off fossil fuel fast, as Biden says we will, then we can take on both despots and climate destruction. It may be a day historians look back on,” he tweeted.

In a statement to The Independent, Kassie Siegel, director of the Center for Biological Diversity’s Climate Law Institute called it a “heroic step to stop funding Putin’s bloody assault on Ukraine”.

“Now Biden can follow with heroic leadership by using his executive authority to urgently boost renewable-energy manufacturing for the US and our allies, and halt the fossil fuels that feed both Putin’s aggression and the climate emergency,” Siegel wrote.

A plethora of economic sanctions and an exodus of multinational companies is throttling the Russian economy after President Vladimir Putin ordered his military to invade neighbouring Ukraine on 24 February.

The UK announced on Tuesday that it would also phase out Russian oil imports by year’s end. The European Union, which is largely dependent on fossil fuel imports from Russia for energy, said it would bring those to an end “well before 2030”.

The bans strike at the heart of the Russian economy which gets almost 40 per cent of its revenues from oil and gas production.

The US only imports a modest amount of oil from Russia – about 3 per cent of crude, and about 8 per cent total petroleum products in 202, according to the American Fuel and Petrochemical Manufacturers group.

However Mr Biden conceded that “the decision today is not without cost here at home” and pointed out that “Putin’s war is already hurting American families at the gas pump”.

Gas prices have shot up across the US, with the average price reaching a record $4.17 a gallon on Tuesday. The White House said that it had committed to releasing 90-plus million barrels from the reserve this year to try to stabilize prices.

Mr Biden aimed to reassure Americans by saying that US oil drilling was at record highs.

And he publicly called on major oil and gas companies, which have also largely exited Russian stakes, not to use the moment “for profiteering or price gouging”.

While the Tories dawdle over Russian gas, we have a £28bn plan to make energy cheap – and green

While the Tories dawdle over Russian gas, we have a £28bn plan to make energy cheap – and green