Biden must be our 'climate president'. He can start by ending pipeline projects 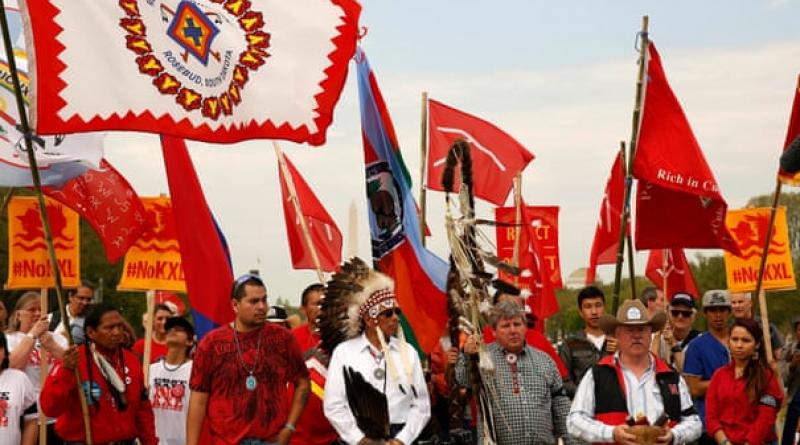 There is no way to mine fossil fuels without driving the planet past 1.5C of warming and putting Indigenous communities at risk.

As we prepare to turn the page on 2020, and inaugurate Joe Biden as president on 20 January 2021, the incoming administration has a climate mandate to listen to people across America – and keep fossil fuels in the ground. This means stopping the Keystone XL, Dakota Access and Line 3 pipelines on day one.

While Trump props up failing fossil fuel companies, including through government handouts from Covid-19 stimulus packages to the tune of $15bn, Biden has already committed to transitioning the United States off oil, holding polluters accountable, honoring treaty rights and stopping the Keystone XL pipeline.

In August, Joe Biden laid out his $2tn climate plan, which has the support of Indigenous peoples and their allies, Black communities and environmental voters. Biden’s climate plan is the most ambitious plan of a major party presidential nominee ever. To be the most ambitious climate president ever, Biden must implement a climate test on all federal permitting and projects, to ensure any project not aligned with tackling the climate crisis and keeping warming under 1.5 degrees does not move forward. A meaningful climate test must keep fossil fuels in the ground.

Just last week, Biden announced the New Mexico congresswoman Deb Haaland as his nominee for US secretary of the interior. Haaland is a member of the Pueblo Laguna tribe; if confirmed she will be the first Native person to serve in the role. We hope her leadership will help protect our public lands and Indigenous sovereignty as we phase out fossil fuels.

As we write, communities across Minnesota are rising up to protect land, water and treaty rights as Line 3 pipeline construction begins and lawsuits are filed in opposition. Meanwhile, communities in South Dakota are mobilizing to pressure Biden to rescind the permit for Keystone XL and end the project once and for all.

If built, Line 3 would release as much greenhouse gas pollution as 50 new coal-fired power plants, violate Ojibwe treaty rights, and put Minnesota’s water, ecosystems and communities in harm’s way. Keystone XL would have a similarly devastating impact on water, land, people and the Oceti Sakowin tribes’ treaty and inherent rights.

Both pipeline projects have blatantly refused meaningful consultation with the tribes impacted. This is glaringly disrespectful to grassroots dedication in territories that have stood up to this invasion for years, as well as a denial of the irreversible impact these pipelines will have on cultural and spiritual sites.

Projects like Line 3 and Keystone XL are also directly linked to violence against and trafficking of Native women and girls, due to the installation of temporary housing for mostly male pipeline workers, known as “man camps”. These man camps are also a hotbed for Covid-19, drawing thousands of out-of-state workers. South Dakota is at a crisis point with Covid-19 cases, yet the threat of Keystone XL construction looms.

There is increasing anticipation of violence from militarized police partnered with Enbridge, the Canadian pipeline company backing Line 3, triggering memories of violence against water protectors and allies in the fight to halt the Dakota Access Pipeline (DAPL).

In the shadow of centuries of genocide and erasure of Indigenous peoples, Barack Obama halted DAPL and rejected Keystone XL. Now, Biden has a chance to build upon this legacy and stop Line 3, Keystone XL and DAPL.

Stopping these pipelines is completely within Joe Biden’s purview and responsibility. Through executive action, Biden can order an immediate pause on oil pipeline construction, and a moratorium on any new projects or expansions, as he reviews Trump-era approvals for conflict or undue influence from the fossil fuel industry. Biden must also reverse over 100 environmental and climate protection rollbacks brought on by the Trump administration.

But to be a true climate president, Biden must go further. Just as pipelines will inevitably spill, any new or existing fossil fuel project would inevitably fail a climate test. There is no safe or clean way to extract, transport, or refine coal, oil or gas without poisoning our communities and driving us past 1.5C of warming. In addition, the construction, transport and burning of fossil fuels have grave impacts on public health and safety, including premature death, lung cancer and increased rates of Covid-19.

From the Keystone XL Promise to Protect to the Line 3 Pledge of Resistance, tens of thousands of people are prepared to wield our sacred and patriotic duty to stop these toxic and unnecessary fossil fuel projects. In addition, thousands of people have already sent petitions to Joe Biden urging him to halt these projects.

It’s time to make polluters pay for the damages done to our communities’ health, land and wellbeing. This starts with stopping fossil fuel projects and returning land to Indigenous peoples. Ultimately, we must dismantle existing projects and fund a just and equitable transition to a regenerative 100% renewable economy.

The stakes are higher than ever – economically, socially and politically. Biden must show guts in holding coal, oil and gas executives accountable for knowingly bringing climate disasters, pollution, sickness and death to our doorsteps.

It’s our time to leap toward a renewable energy revolution that centers Indigenous sovereignty, community health, and a safe, livable future for all.