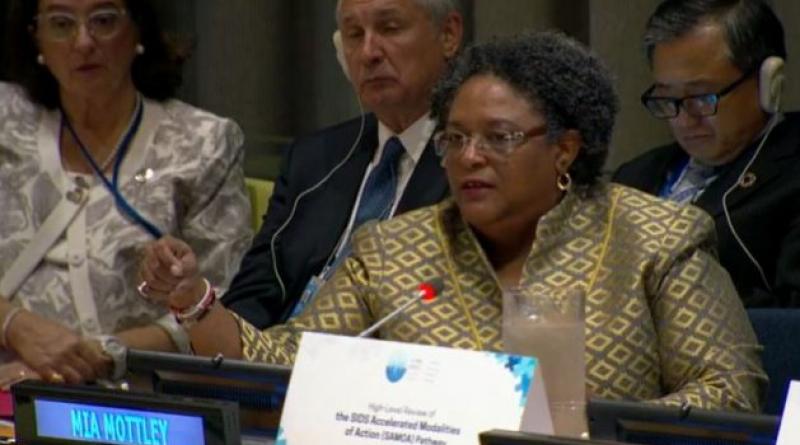 UNITED NATIONS, Oct 1 2019 (IPS) - The Prime Minister of Barbados Mia Mottley tells IPS her patience is running thin, as she challenges the world to tackle the climate crisis.

She warned of a backlash of mass migration to the world’s richest and biggest polluters, saying an influx of climate refugees can be expected in coming years as a consequence of failing to take action to stop climate change.

“The bottom line is that we are not here by accident. There is no traditional norm on the part of the world where I come from,” Mottley tells IPS.

During last week’s United Nations General Assembly (UNGA), the world body convened a one-day, high-level review of progress made in addressing SIDS’ priorities in the first five years since implementation.

According to the world leaders, progress toward sustainable development in SIDS will require a major increase in investment.

“It is a critical political moment, given the overwhelming challenges that threaten our sustainable development,” Elrington tells IPS.

“Our people receive daily reminders of the ticking clock for our survival. Last year we had a special report from the IPCC [Intergovernmental Panel on Climate Change] that predicted utter devastation for our countries if we missed the 1.5° C target.”

Elrington says the latest special report on the ocean and cryosphere from the IPCC projecting that 65 million people who inhabit islands and low-lying states are at risk of total inundation, only reinforced what is already happening.

“Our beaches are disappearing, our drinking water is being salinated, our oceans and seas are warming, acidifying and deoxygenating threatening our reefs and our fisheries. And if we are not experiencing more frequent flooding events, we are experiencing extreme drought events,” Elrington adds.

“Anyone of us could be the next to face a Category 5 hurricane or cyclone. We are the ground zero of a global climate and biodiversity crisis.”

Already on the frontlines of climate change, sustainable development in many SIDS is threatened by difficulties in achieving sustained high levels of economic growth, owing in part to their vulnerabilities to the ongoing negative impacts of environmental challenges and external economic and financial shocks.

“I refer to Dominica, whose public service is minuscule to most countries but who are required to jump through the same hoops to unlock 300 million dollars in public funds while the people of Dominica, who were affected like the people of Abaco and Grand Bahama [in the Bahamas], don’t know where they’re going to earn money this week,” Mottley adds.

The prime minister says: “Twenty five years ago we met in Barbados and settle the Barbados Programme of Action, and on that occasion, we recognised that the wellbeing and welfare of Small Islands Developing States required special recognition and was a special case for our environment and our development.”

Meanwhile, Guyana’s Minister of Foreign Affairs Karen Cummings says even with their limited resources, SIDS have been doing their part, adding that her country has taken an “aggressive” approach towards climate change and has been “ambitious” in its nationally determined contribution commitments.

Leaders called on the international community to mobilise additional development finance from all sources and at all levels to support SIDS and welcomed the ownership, leadership and efforts demonstrated by these states in advancing the Implementation of the SAMOA Pathway.

They expressed their concern about the devastating impacts of climate change, the increasing frequency, scale and intensity of disasters and called for urgent and ambitious global action in line with the Paris Agreement to address these threats and their impacts.

The High-level Review of the SAMOA Pathway comes one month after Hurricane Dorian devastated parts of the Bahamas, causing significant loss of life and property damage.  Countries noted that the increasing frequency, scale and intensity of natural disasters will continue to claim lives, decimate infrastructure and remain a threat to food security.

While some progress has been made in addressing social inclusion, poverty, and unemployment, inequality continues to disproportionately affect vulnerable groups, including women and girls, persons with disabilities, children and youth. More support is needed to strengthen public health systems in SIDS and especially reduce the risk factors for non-communicable diseases, and healthcare after disasters.

Michael Tierney, Deputy Permanent Representative of Ireland to the United Nations and co-facilitator for the Political Declaration of the SAMOA Pathway midterm review, says SIDS have done excellent work in setting up a partnership framework at the United Nations, whereby the partnerships they are working on are monitored and registered and there is an analysis done of their effectiveness.

“It’s actually a model of other parts of the world to look at. It can be improved and it can be strengthened but there is a very detailed process here at the U.N. whereby we try to encourage new development partnerships for the islands, but also, we try to monitor and analyse what we’re doing and if we’re doing it well,” Tierney tells IPS.

“One of the things, quite frankly, that we need to do better is get more private sector interest in projects. That’s a problem across the board in the developing world but it’s something that is specifically a difficulty in the Small Island Developing States.”

*TITLE PHOTO: Prime Minister of Barbados Mia Mottley warned of a backlash of mass migration to the world’s richest and biggest polluters, saying an influx of climate refugees can be expected in coming years as a consequence of failing to take action to stop climate change. Courtesy: Desmond Brown