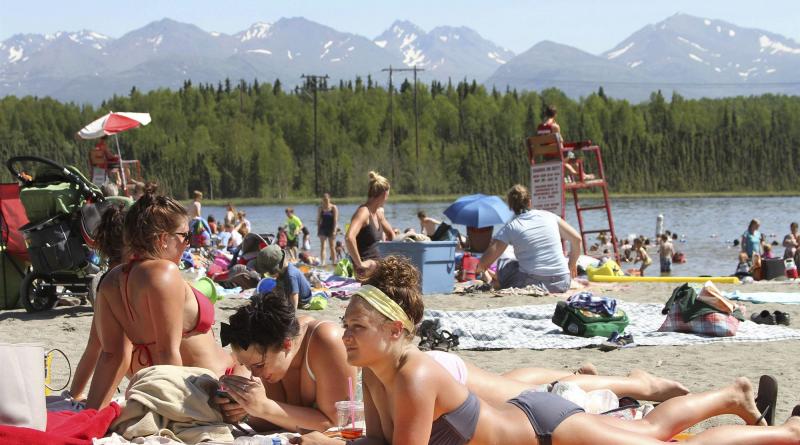 Experts say the blast of heat is "the definition of unusual.”

Alaska could experience record high temperatures in the coming days as a massive heat dome parks over the region, sending temperatures higher than have ever been recorded in the state.

The unusual heat wave is expected to bring temperatures of 87 degrees or higher over the next five days, stretching from July 4 through July 8.

The agency added that temperatures through Friday could match or break the all-time high temperature record set at Anchorage International Airport of 85 degrees on June 14, 1969. “The most likely days for this to occur would be Thursday or Friday,” the National Weather Service forecast said.

The current record in Alaska’s largest city could even be surpassed over several days, according to Brian Brettschneider, a climate researcher at the University of Alaska Fairbanks.

“It’s entirely possible that the warmest temperature ever recorded in Anchorage could be exceeded three to five days in a row,” Brettschneider said. “That’s the definition of unusual.” 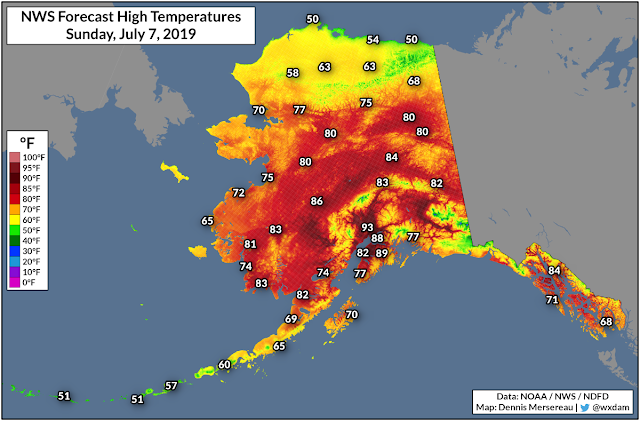 High temperatures will soar into the 90s near Anchorage over the next week as a historic heat wave builds across Alaska. The actual air temperature is astounding—90s in southern Alaska!—but the duration of this heat wave will take an especially hard toll on residents not used to such warm temperatures. The heat isn't forecast to break until the middle of next week.

This heat wave is the result of a strong ridge of high pressure building over Alaska this week. The ridge will peak this weekend before waning early next week. Calm, sinking air beneath the high will allow temperatures to climb into record territory for an extended period of time.

The latest forecast from the National Weather Service shows highs easily climbing into the 80s across most of central and southern Alaska. The Anchorage area will see the worst of the heat. The official high temperature in Anchorage*, recorded at Ted Stevens International Airport on the west side of the city, could meet or exceed the all-time high temperature of 85°F set in June 14, 1969. Temperatures will climb into the 90s for the duration of the heat wave in the valley north of Anchorage, which is home to communities like Wasilla. The average high in Anchorage at the beginning of July is about 65°F.

*Note: The official temperature in Anchorage is recorded at the international airport, which is right on the water. The rest of Anchorage gets warmer as it's farther inland. The temperature label for Anchorage on the maps in this post are for the forecast point very close to downtown Anchorage, which more accurately reflects the temperature that residents will experience.

It can get quite warm in low-lying parts of Alaska that are on relatively flat land. Fairbanks, for instance, climbs into the upper 80s or low 90s at least a few times each summer. The state's all-time high temperature was 100°F set in Fort Yukon, north of Fairbanks, during the historic heat wave of 1915.

A long-duration heat wave of this caliber will pose a risk for heat-related illnesses in vulnerable populations. Most homes and businesses here don't have air conditioning. It's Alaska, after all. They rarely need it.

The lack of cooling systems, combined with the intense high-latitude summer sunshine and homes built "to hold onto every molecule of warmth," will lead to a long period of abject misery for most folks affected by this heat wave. It'll be hard or impossible to stay cool at home, leading to a heightened risk of heat exhaustion or heat stroke in the elderly and those in poor health.

This event is an unsettling reminder that Alaska is steeped in the effects of our changing climate. Climate Central sums it up well:

Alaska is the fastest-warming state by far, as the Arctic is warming twice as quickly as the rest of the world. And what happens in the Arctic, doesn’t stay in the Arctic. Melting glaciers are fueling sea level rise and permafrost thaws are releasing more heat-trapping gases. According to a recent UN report, winter temperatures over the Arctic Ocean could rise 5-9°F by midcentury unless the world’s emissions reduction commitments are strengthened.

One heat wave isn't a Day After Tomorrow-esque manifestation of climate change, but the warming trend in Alaska over the last couple of decades is undeniable. 2014, 2015, 2016, 2017, and 2018 were five of the ten warmest years ever recorded in Alaska. Climate change accentuates the extremes, making heat waves like this more likely in the future