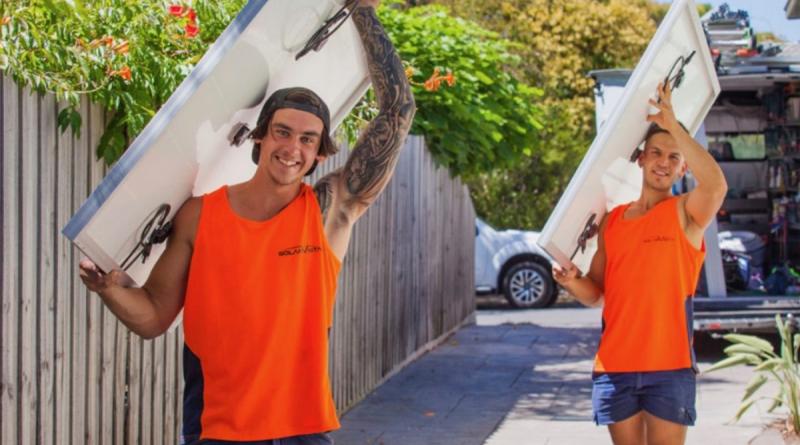 The continuing dominance of the small-scale solar sector and the great potential for regional and rural jobs are just some of the findings in the Clean Energy Council’s “Clean Energy At Work”, a first-of-its-kind extensive report into the current renewable energy workforce and its potential over the next 10-15 years.

The CEC Report is the largest study of its kind yet focused on the current and projected employment prospects in Australia’s renewable energy industry. The Report, based on research performed at the University of Technology Sydney’s Institute for Sustainable Futures, was commissioned in mid-2019 and only considers direct jobs in renewable energy generation and associated supply chains.

Number of jobs could almost double in five years

By 2025, the Institute for Sustainable Futures predicts that Australia’s renewable energy sector could employ as many as 44,000 people under the Australian Energy Market Operator’s (AEMO) Step Change Scenario (a scenario assuming policy commitments in line with the Paris Agreement).

Of course, this prediction of job growth relies heavily on decisive Australian clean energy transition policy, an eventuation about as likely to come out of the Morrison Government as a Hip-Hop mixtape.

The Report found that at least 25,000 people are currently employed across the renewable energy industry, of which more than half are employed in the development, construction and maintenance of Australia’s solar capacity. And indeed, more than a third, almost 10,000 of these jobs, are in small-scale rooftop solar.

Most of these small-scale solar jobs are provided by small to medium-sized businesses. In contrast, large-scale solar employs only 13% of the renewable industry workforce. 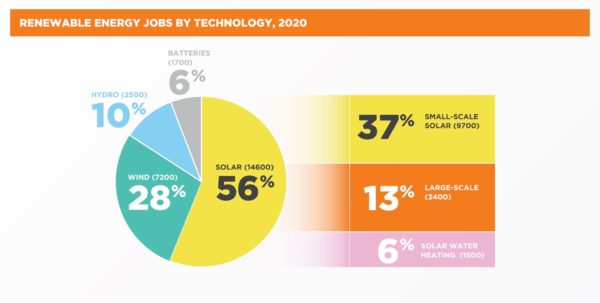 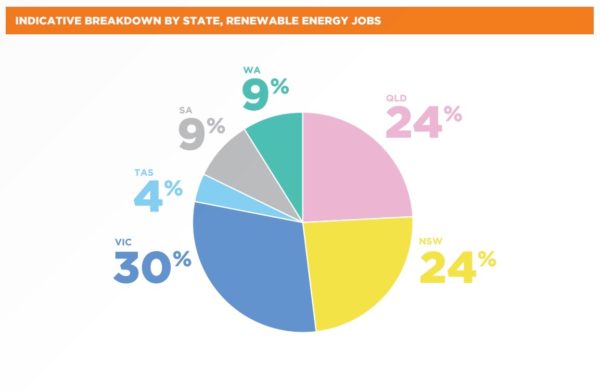 The researchers also believe small-scale rooftop solar will continue as the largest generator of employment in the industry as more and more Australians make the commonsense decision of installing solar PV systems on their homes and businesses.

Of course, this also means that the abundance of small to medium-sized businesses (generally employing fewer than 20 people) are likely to continue to thrive.

For years Australia has been looking for ways of boosting the regional and rural employment market. As more and more Australians have huddled into the main cities in search of work, the country has been left wanting, but it is the country that will sustain us, for it is the country itself that will generate the solar, wind and other renewable energies that will power our future.

According to the Report, approximately 70% of renewable energy job opportunities to 2035 could be distributed across regional and rural Australia. AEMO’s proposed Renewable Energy Zones (REZs) are well distributed throughout the states, meaning regional communities and rural areas could see serious and sustainable growth, far more sustainable say, than the life of a mine. 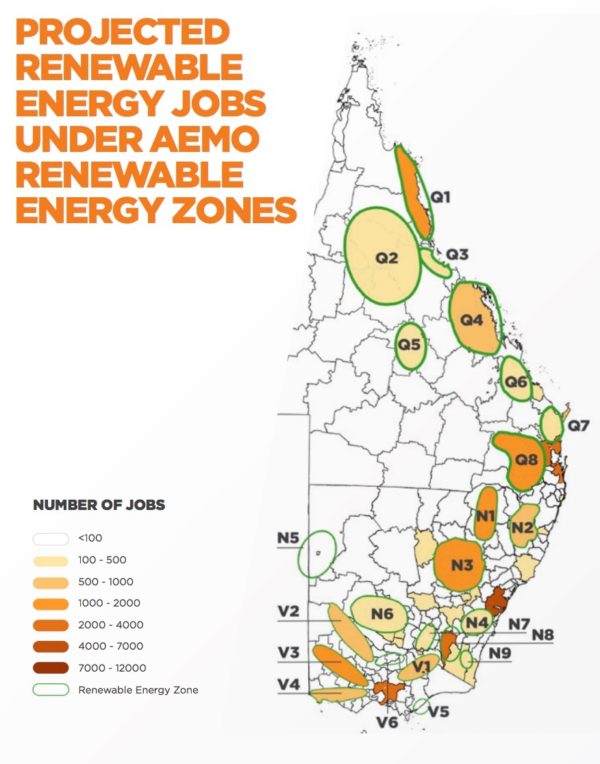 There is no such thing as a thriving employment industry if said industry does not allow range. Thankfully, the renewable energy industry provides a variety of jobs for both the generalist and the specialist.

Tradies and technicians will only find themselves in increased demand. In the rooftop solar industry that means especially sparkies and installers, but also roofers and electrical trade assistants. In the large-scale sparkies are also sought after, but there is also room for less-skilled labourers for assembly work.

Of course, in hydro power and pumped hydro the need for specialised technical knowledge is only going to grow, but that is not to say concreters, drivers, and general labourers won’t have lots of work on their hands.

Indeed, we cannot forget that the clean energy industry produces an enormous amount of off-the-ground jobs, administrators, IT, finance, planning, marketing, sales, engineering, and of course, our friends in health and safety.

Ultimately, once a greater number of projects have been developed, a significant faction of the employment market will find itself in maintenance. The Report expects that by 2030 almost half of all jobs in the industry could be jobs in operation and maintenance of renewable installations.

After small-scale solar, large-scale solar and wind farms are together the second biggest employer in the renewable energy industry. However, employment growth in this sector is heavily dependent on specific projects and government policy decisions.

The Report’s researchers believe that if the federal policy were more reflective of its Paris Agreement commitments, employment in the wind sector could double to 14,000 by 2035. Of course, at this moment policy uncertainty still reigns in Canberra and with investor confidence slipping in the face of stagnated grid reform, and other policy blindspots, employment in large-scale wind and solar could actually drop below 30% of current levels by 2022-2023.

“In all scenarios,” says the Report, “renewable energy projects employ more people than domestic coal mining and coal power generation fro now through to 2035.” The renewable industry can certainly help in replacing the continual loss of coal jobs that come with the scheduled retirement of coal-fired power stations, and reducing international demand in export markets. However, of course, there are few direct matches for the core coal mining workforce and its semi-skilled machine operators.

Are we thinking too small?

The Institute for Sustainable Futures Report is the first ever national study of Australia’s renewable energy workforce, it puts a flag in the state of affairs.

However, others are thinking bigger. Climate change think-tank Beyond Zero Emissions’ (BZE) “Million Jobs Plan” is an nation-building effort to create more than 140,000 jobs through the deployment of 90 GW of renewable energy in the next five years. 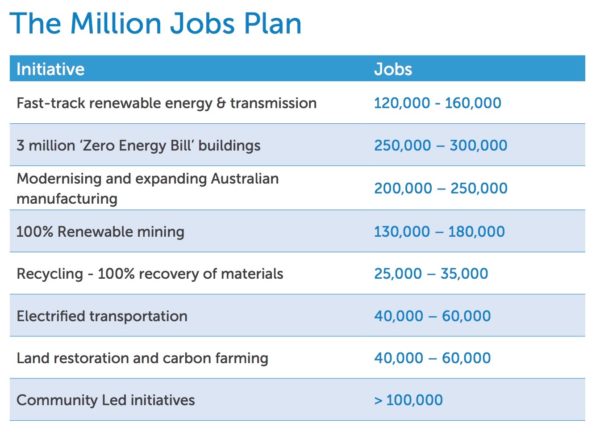 “Never in history has a technological transition been so clearly flagged as the shift to renewable energy,” says BZE. “For Australia, cheap renewables offer an even bigger prize – the opportunity to become a Renewable Energy Superpower.”

The Million Jobs plan depends on mass-scale renewables, a national backing of our competitive advantage in renewable energy as if it were cricket or Kylie. “Cheap, abundant renewable energy will spark the emergence of whole new industries, such as renewable hydrogen, energy-intensive manufacturing, zero-emissions steel and electricity exports to our Asian neighbours.”

BZE is aware that to fully capitalise and nation-build through renewable energies the nation must also increase its capacity to manufacture renewable energy components, such as batteries. In a globalised world this is hard to imagine happening, but perhaps in a post-Covid-19 world, when markets are aware of how insecurely dependent they are on imports, such an increase is possible. 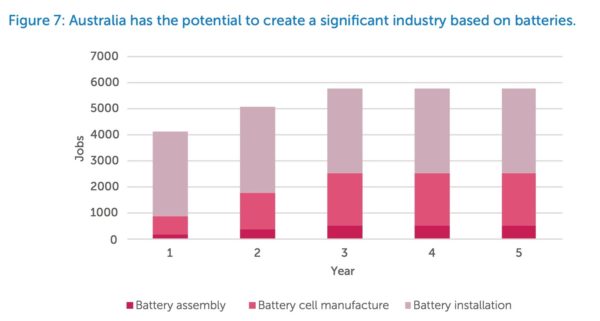 Indeed, BZE believe Australia could become a global hub for the battery industry thanks to its world-leading reserves of key battery materials (Australia is already the world’s largest lithium exporter). And yet, BZE estimates Australia only captures 0.5% of the supply-chain value of exported lithium.

Of course, like the CEC Report, everything depends on policy settings, on a shift in political thinking from current squabbles to shining futures.

Energizing the Green Economy : The growth of clean energy jobs