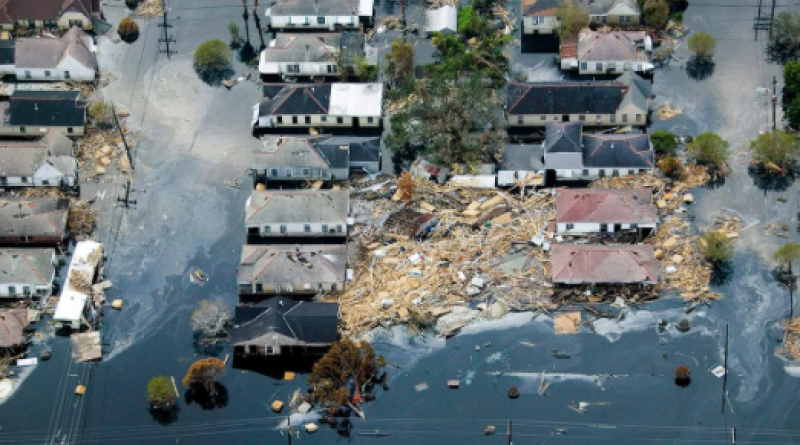 Disasters stemming from hazards like floods, wildfires, and disease often garner attention because of their extreme conditions and heavy societal impacts. Although the nature of the damage may vary, major disasters are alike in that socially vulnerable populations often experience the worst repercussions. For example, we saw this following Hurricanes Katrina and Harvey, each of which generated widespread physical damage and outsized impacts to low-income and minority survivors.

Social vulnerability researchers seek to understand the impediments and capacities of people and communities to prepare for, respond to, and recover from extreme natural hazards. A major tool in this work is social vulnerability modeling, the use of which is expanding in large part because of growing awareness of the social equity implications of disasters.

This modeling applies knowledge garnered from disaster case studies describing how chronic marginalization translates to disproportionate adverse outcomes to identify the most vulnerable population groups. Such populations often include those living in poverty, the very old and young, minoritized ethnic and racial groups, renters, and recent immigrants [National Academies of Sciences, Engineering, and Medicine, 2019]. Social vulnerability modelers select demographic variables representing these groups and combine them to construct spatial indicators and indexes that enable comparisons of social vulnerability across places.

Figure 1a is a typical map of social vulnerability across the United States at the census tract level based on the Social Vulnerability Index (SoVI) algorithm of Cutter et al. [2003]. Spatial representation of the index depicts high social vulnerability regionally in the Southwest, upper Great Plains, eastern Oklahoma, southern Texas, and southern Appalachia, among other places. With such a map, users can focus attention on select places and identify population characteristics associated with elevated vulnerabilities. 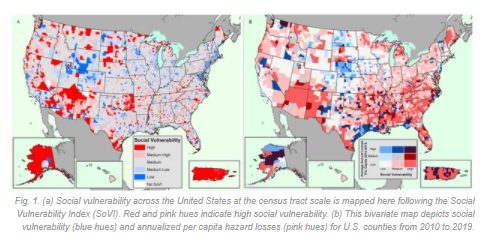 Many current indexes in the United States and abroad are direct or conceptual offshoots of SoVI, which has been widely replicated [e.g., de Loyola Hummell et al., 2016]. The U.S. Centers for Disease Control and Prevention (CDC) has also developed a commonly used social vulnerability index intended to help local officials identify communities that may need support before, during, and after disasters.

More recent work is beginning to dissolve barriers between social vulnerability and environmental justice scholarship [Chakraborty et al., 2019], which has traditionally focused on root causes of exposure to pollution hazards. Another prominent new research direction involves deeper interrogation of social vulnerability drivers in specific hazard contexts and disaster phases (e.g., before, during, after). Such work has revealed that interactions among drivers are important, but existing case studies are ill suited to guiding development of new indicators [Rufat et al., 2015].

Advances in geostatistical analyses have enabled researchers to characterize interactions more accurately among social vulnerability and hazard outcomes. Figure 1b depicts social vulnerability and annualized per capita hazard losses for U.S. counties from 2010 to 2019, facilitating visualization of the spatial coincidence of pre‑event susceptibilities and hazard impacts. Places ranked high in both dimensions may be priority locations for management interventions. Further, such analysis provides invaluable comparisons between places as well as information summarizing state and regional conditions.

In Figure 2, we take the analysis of interactions a step further, dividing counties into two categories: those experiencing annual per capita losses above or below the national average from 2010 to 2019. The differences among individual race, ethnicity, and poverty variables between the two county groups are small. But expressing race together with poverty (poverty attenuated by race) produces quite different results: Counties with high hazard losses have higher percentages of both impoverished Black populations and impoverished white populations than counties with low hazard losses. These county differences are most pronounced for impoverished Black populations. 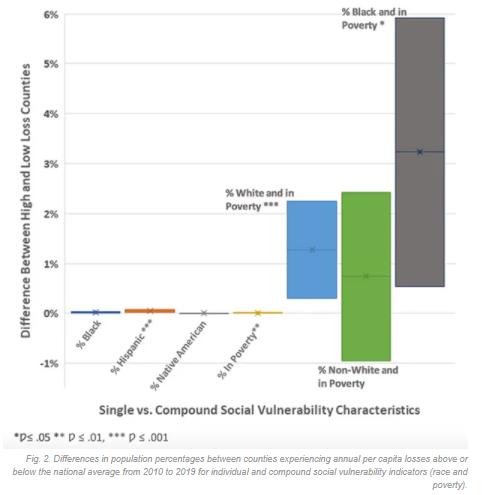 Social Vulnerability as a Measure of Equity

Given their focus on social marginalization and economic barriers, social vulnerability indicators are attracting growing scientific interest as measures of inequity resulting from disasters. Indeed, social vulnerability and inequity are related concepts. Social vulnerability research explores the differential susceptibilities and capacities of disaster-affected populations, whereas social equity analyses tend to focus on population disparities in the allocation of resources for hazard mitigation and disaster recovery. Interventions with an equity focus emphasize full and equal resource access for all people with unmet disaster needs.

Yet newer studies of inequity in disaster programs have documented troubling disparities in income, race, and home ownership among those who participate in flood buyout programs, are eligible for postdisaster loans, receive short-term recovery assistance [Drakes et al., 2021], and have access to mental health services. For example, a recent analysis of federal flood buyouts found racial privilege to be infused at multiple program stages and geographic scales, resulting in resources that disproportionately benefit whiter and more urban counties and neighborhoods [Elliott et al., 2020].

Investments in disaster risk reduction are largely prioritized on the basis of hazard modeling, historical impacts, and economic risk. Social equity, meanwhile, has been far less integrated into the considerations of public agencies for hazard and disaster management. But this situation may be beginning to shift. Following the adage of "what gets measured gets managed," social equity metrics are increasingly being inserted into disaster management.

At the national level, FEMA has developed options to increase the affordability of flood insurance [Federal Emergency Management Agency, 2018]. At the subnational scale, Puerto Rico has integrated social vulnerability into its CDBG Mitigation Action Plan, expanding its considerations of risk beyond only economic factors. At the local level, Harris County, Texas, has begun using social vulnerability indicators alongside traditional measures of flood risk to introduce equity into the prioritization of flood mitigation projects [Harris County Flood Control District, 2019].

Unfortunately, many existing measures of disaster equity fall short. They may be unidimensional, using single indicators such as income in places where underlying vulnerability processes suggest that a multidimensional measure like racialized poverty (Figure 2) would be more valid. And criteria presumed to be objective and neutral for determining resource allocation, such as economic loss and cost-benefit ratios, prioritize asset value over social equity. For example, following the 2008 flooding in Cedar Rapids, Iowa, cost-benefit criteria supported new flood protections for the city's central business district on the east side of the Cedar River but not for vulnerable populations and workforce housing on the west side.

Furthermore, many equity measures are aspatial or ahistorical, even though the roots of marginalization may lie in systemic and spatially explicit processes that originated long ago like redlining and urban renewal. More research is thus needed to understand which measures are most suitable for which social equity analyses.

Across studies that quantify, map, and analyze social vulnerability to natural hazards, modelers have faced recurrent measurement challenges, many of which also apply in measuring disaster equity (Table 1). The first is clearly establishing the purpose of an equity analysis by defining characteristics such as the end user and intended use, the type of hazard, and the disaster stage (i.e., mitigation, response, or recovery). Analyses using generalized indicators like the CDC Social Vulnerability Index may be appropriate for identifying broad areas of concern, whereas more detailed analyses are ideal for high-stakes decisions about budget allocations and project prioritization. 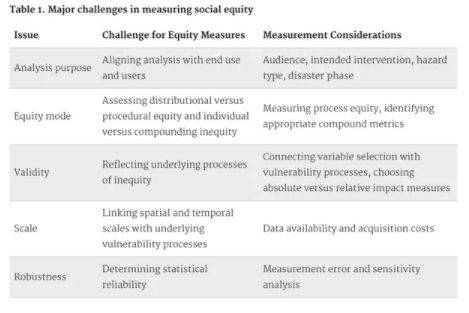 Selecting the relevant modes of equity for analysis is crucial. Is the primary interest to quantify disparities in the distribution of hazard impacts or procedural disparities in accessing resources? Is the focus on individual populations or on combinations of population characteristics? As social inequities often accrue to low-income households, analysts should consider assessing economic losses in both absolute and proportional terms.

Creating valid measures of equity requires not only statistical expertise but also a fundamental understanding of the underlying processes of social marginalization. This facilitates selection of optimal proxy indicators and their geographic scales. However, practical considerations like data availability and cost can lead to indicator selection that diverges from conceptual bases. For example, for disaster assistance received by households, an equity analysis should ideally be conducted at the household scale. Unfortunately, data describing some dimensions of inequity, like race, are rarely collected by disaster agencies, necessitating analysis using census data at larger geographic scales.

The final major challenge is to develop statistically robust measures and best practices for assessing disaster equity that strengthen the foundation for policy interventions. Doing so may require expanding current approaches to include sensitivity analyses to assess how choices of parameters (e.g., input variables, geographic scale) in building social vulnerability indicators affect the statistical stability of resulting measures, and how these measures correlate with observed disaster impacts like dislocation, assistance eligibility, and recovery time.

The stakes for improving our understanding of relationships among hazards, vulnerability, and social equity are high, as climate disasters from flooding, drought, tropical cyclones, and wildfire have been increasing in their frequency and destruction. By definition, sustainable solutions that empower communities to resist, recover from, and adapt to these threats must be not only economically viable and environmentally sound but also socially equitable. Well-designed measures of disaster equity are an important tool for quantifying disaster disparities, which is the first step toward dismantling them.

This story originally appeared in Eos and is republished here as part of Covering Climate Now, a global journalism collaboration strengthening coverage of the climate story.