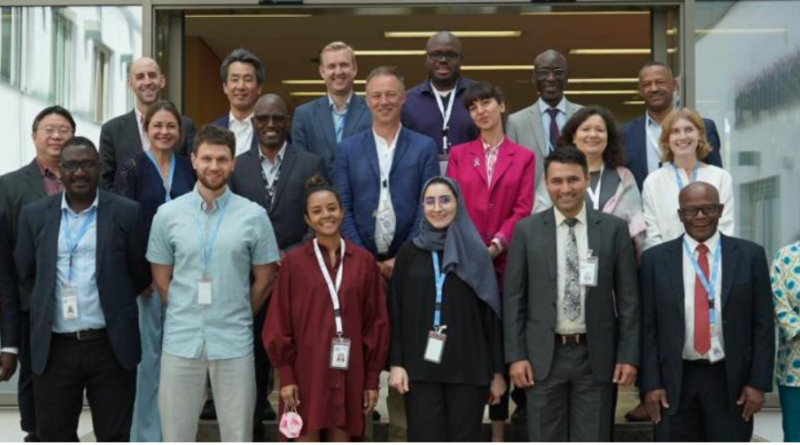 Delivering a new standard for international carbon markets dedicated to enable enhanced mitigation and adaptation is the intention that members of the Article 6.4 Supervisory Body emphasized at their first meeting, after agreeing to the draft Rules of Procedure. Throughout the meeting that took place in Bonn from 25 to 28 July, the Supervisory Body grounded its reflections in the context of the broader implementation of the Paris Agreement.

Immediately after Mr. James Grabert, Director of the UNFCCC Mitigation Division, opened the meeting, the Supervisory Body elected Ms. Kristin Qui (Trinidad and Tobago) as its Chair and Mr.  Piotr Dombrowicki (Poland) as its Vice Chair until the first meeting of the Supervisory Body in 2023.

“I am very grateful to my colleagues for entrusting me with Chairing the Supervisory Body”, says Qui. “I take this responsibility with purpose and hope to contribute to the setup of a mechanism that will function transparently and support an ambitious implementation of the Paris Agreement. It needs to be a tool enabling the world to address the ambition gap it is facing. We have a lot of work ahead of us and no time to waste.”

A fitting illustration of this commitment to efficiency lies in the Supervisory Body’s consideration of its draft Rules of Procedure. In response to the request made by the Conference of the Parties serving as the meeting of the Parties to the Paris Agreement (CMA) in its decision 3/CMA.3, paragraph 6 (a), the Supervisory Body not only agreed to its draft Rules of Procedure, but also to recommend them for adoption by the CMA at its fourth session, to be held in Sharm el-Sheikh in November. It further decided to apply the Rules of Procedure immediately, on a provisional basis until their formal adoption. The Supervisory Body will reflect on the content of the oath of service at its next meeting to allow sufficient time for an assessment on the legalities associated with it.

The Supervisory Body also began to shape its workplan for 2022 and 2023, aiming to map necessary deliverables and their indicative timelines, as well as available CDM expertise, indicative human and financial resource implications and other actions to be taken to operationalize the mechanism. The Supervisory Body underlined the importance of strategic communications in the work ahead.

“The first meeting of the Article 6.4 Supervisory Body clearly sets an intention for an efficient operationalization of the mechanism”, said Grabert. “Members have engaged in constructive discussions on many issues, substantive and organizational. What renews my confidence in the future is to witness their unanimous commitment to work together with the UNFCCC secretariat to support the Paris Agreement’s effective implementation, taking into account a wide array of stakeholders. I would also like to take this opportunity to congratulate Ms. Qui and Mr. Dombrowicki on their election.”

With the meeting addressing the four mandates spelled out in decision 3/CMA.3 paragraph 6, the Supervisory Body also tackled structural matters. It already settled on a number of approaches pertaining to the mechanism’s share of proceeds, addressing paragraph 6 (b) – in particular registration and issuance fee levels and calculations, as well as fee exemptions. More work to determine those will be led at the second meeting of the Supervisory Body, with a view to forwarding a recommendation for the CMA’s adoption at its fourth session.

The Supervisory Body also undertook a discussion on activities involving removals under the Article 6.4 Mechanism, and a discussion on elaborating guidance for the development of methodologies for the mechanism, as per the CMA request in paragraphs 6 (c) and (d) of decision 3/CMA.3. In both cases, the Supervisory Body decided to establish an informal working group of members and alternates to work with UNFCCC secretariat staff, as well as with each other, with a view to drafting recommendations to the CMA before their second meeting.

The Supervisory Body further recognized the need for capacity-building triggered by the birth of the new mechanism and plans to look into the design and implementation of capacity-building programmes at its next meeting. More particularly, these would aim to assist Parties wishing to voluntarily participate in the mechanism.

Finally, the Supervisory Body welcomed the offer of support from the Executive Board of the Clean Development Mechanism contained in a letter from the Chair and the Vice-Chair of the Board and concurred to consider it while operationalizing the mechanism.

Beyond substantive, structural and organizational matters, the Supervisory Body also clearly communicated a number of values throughout the meeting. These included an attachment to diversity, such as gender, age, expertise and cultural backgrounds, a commitment to innovative thinking and a dedication to transparency. An example of the latter can be found in the unanimous agreement to allow registered observers to follow the proceedings as well as to hold interactions with the Supervisory Body at the end of each meeting, time allowing.

The second meeting of the Supervisory Body will be held in Bonn, Germany, on 19–22 September 2022.

More details can be found in the meeting report.

Article 6 of the Paris Agreement establishes three approaches for Parties to voluntarily cooperate in achieving their emission reduction targets and adaptation aims set out in their national climate action plans under the Paris Agreement (Nationally Determined Contributions, or NDCs).

One of these approaches is through the Article 6.4 Mechanism, a mechanism “to contribute to the mitigation of greenhouse gas emissions and support sustainable development”, as per Article 6, paragraph 4 of the Paris Agreement. The Conference of the Parties serving as the meeting of the Parties to the Paris Agreement, at their third session in Glasgow, adopted the rules, modalities and procedures for the mechanism.

Through this mechanism, a company in one country can reduce emissions in that country and have those reductions credited so that it can sell them to another company in another country. That second company may use them for complying with its own emission reduction obligations or to help it meet net zero.