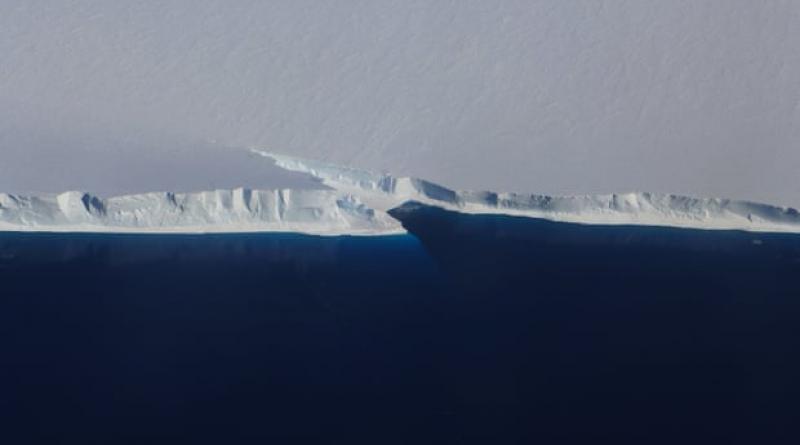 Approximately 60% of Antarctica’s ice shelves could be vulnerable to fracture, accelerating the loss of the Antarctic ice sheet and increasing sea-level rise, according to a paper.

Antarctica’s ice shelves, floating extensions of the ice sheet, help slow the flow of ice into the ocean. But if these shelves fracture and then collapse, the flow of melting glaciers into the oceans accelerates.

A study published in the journal Nature has mapped areas where ice shelves hold back upstream ice and are susceptible to “hydrofracture”, where meltwater flows into crevasses and fissures in the ice and enlarges them, potentially triggering the collapse of the ice shelf.

This process could accelerate the loss of Antarctic ice more than some climatic models predict as atmospheric warming increases. The study followsscientists’ recent announcement that Earth has lost 28tn tonnes of ice from its surface since 1994.

Most climatic models do not include the impact of hydrofracturing in their calculations, although one 2016 paper did account for them in a simpler way than the new study.

Hydrofracturing can only occur if the surface of an ice shelf is inundated with meltwater. Large pools of meltwater have existed in many areas of Antarcticafor decades without causing the collapse of an ice shelf because the flow of water into surface fissures is slow or refreezes.

While some areas are not susceptible to fracture, Ching-Yao Lai of the Earth Institute at Columbia University and colleagues identified that 60% of the Antarctic ice shelf was both slowing the flow of ice into the ocean and also vulnerable to fracture.

While fractures in the ice are visible in satellite imagery, manual mapping is impractical because of the extent of the ice. So Lai and colleagues used machine learning to identify fracture-like features in satellite pictures of Antarctica, before modelling which fractures were vulnerable to hydrofracturing.

They developed a model to predict where fractures could form and found close agreement with the fractures mapped by their machine learning algorithm.

“But predicting how much and how fast the loss of Antarctic ice and sea-level rise will occur due to the hydrofracturing process will require coupling our new fracture model with an ice-sheet and climate model, which is an important next step.”

The researchers hope their fracture model can help create more accurate models of the fate of the ice sheets, which together with climatic modelling will produce more accurate predictions of sea-level rise, which scientists believe could exceed one metre by the century’s end.

The researchers warned that while many areas of Antarctic meltwater were not currently likely to cause the hydrofracture of the ice beneath, with global heating these areas could become newly at risk in the future.

“Increased meltwater ponding in resilient locations will not lead to widespread hydrofracturing according to our analysis,” the authors wrote. “However, predictions of future melt suggest that melt rates seen in locations that experience meltwater ponding today could become widespread by 2100 under high-emissions scenarios.”

A journey into Antarctica: the unavoidable signs of global heating.