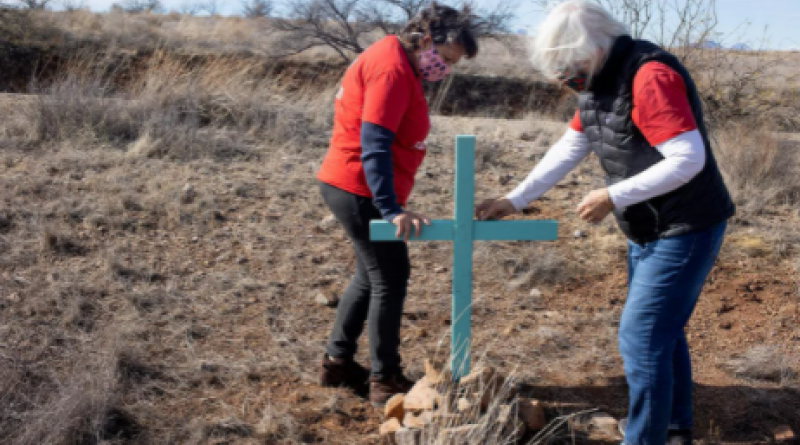 The Tucson, Arizona-based non-profit group Humane Borders said Tuesday that amid the Southwest's extreme heatwave last month, an unusually large number of migrants' human remains were found in the desert near the U.S.-Mexico border.

The group, which maps the recovery of human remains using data from the Pima County medical examiner and operates stations scattered throughout the borderlands where migrants can access water, said its volunteers counted 43 human bodies in June.

At least 29 of the people whose remains were found were confirmed to have died last month, as Arizona officials recorded the hottest June on record. Temperatures reached above 110 degrees Fahrenheit in Phoenix, which typically has similar weather to the Sonoran Desert, where migrants make perilous journeys throughout the year after crossing the border.

The Pima County medical examiner's office listed exposure to the elements as the most common cause of death among the people whose bodies were found.

The unusually high number of migrant deaths in the desert last month follows the discovery of 127 bodies in the border region in the first half of 2021, compared to 96 bodies that were recovered in the same period last year.

According to the Associated Press, the Brooks County Sheriff's Department in southern Texas, which also experienced extreme heat last month, reported 36 migrant deaths in the first five months of this year, surpassing the total number found in 2020.

"There's no doubt in my mind that the high temperatures have had a lot to do with it," Mike Kreyche, Humane Borders' mapping coordinator, told the AP last December when the newswire reported that 214 bodies were documented by the group for the year—a 10-year record which may be broken again this year.

At the online magazine Atmos, Yessenia Funes wrote on Monday about how the historic heat wave last month made an already treacherous journey more dangerous for migrants — and how the trend is likely to continue.

Funes wrote that along the U.S.-Mexico border since last October, Customs and Border Protection (CBP) "has conducted nearly 7,000 rescues—35% more than its last fiscal year," yet appears to have made "no clear plans" for avoiding mass casualties in the desert as the climate crisis worsens.

"Helping those in distress is good, but preventing them from entering such dangerous situations would be better," wrote Funes. "At the moment, the agency's only attempt to stop folks from migrating is through a militarized border and, well, telling them not to."

"What we must remember is that none of this is necessary. People shouldn't have to brave extreme desert climates to reach the United States," she added. "We should be able to offer them safe and legal pathways to find the help they seek. The fact that the U.S. doesn't is a choice our leaders make."

On social media, Funes noted that her parents trekked across the desert in the Southwest four decades ago. 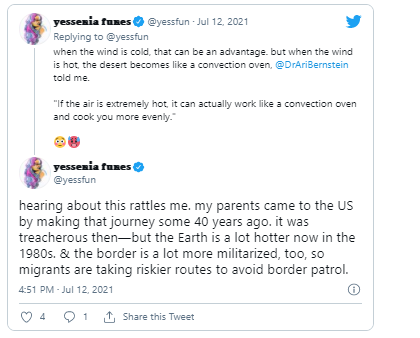 "It was treacherous then—but the Earth is a lot hotter now in the 1980s," Funes wrote. "And the border is a lot more militarized, too, so migrants are taking riskier routes to avoid border patrol."

"All of this will only grow more and more urgent and dangerous as the world grows hotter, countries in the Global South become more unstable, and more folks head north," Funes said.