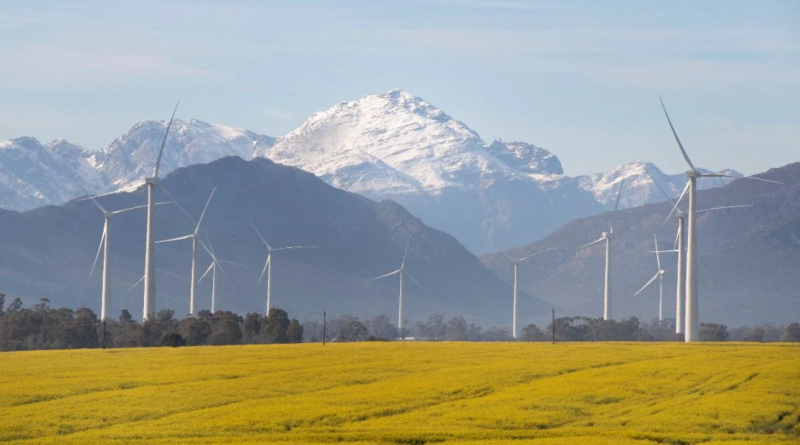 There are obvious advantages to filling Africa’s electricity gap using renewable energy, including from wind. On top of the climate benefits, both onshore and offshore wind are increasingly able to deliver lower-cost power than fossil fuels.

According to the International Renewable Energy Agency, almost two-thirds of new renewable energy capacity installed in 2020 generated cheaper electricity than would have been available from the lowest-cost fossil fuel alternative. The cost benefits have since become even larger, owing to the massive increase in gas costs over the past year.

Africa is blessed with abundant wind resources. Research commissioned for the IFC in 2020 found that the continent’s wind resources could supply its electricity demand 250 times over. “It is only recently that we have realised what a good wind resource there is in sub-Saharan Africa,” says Linda Munyengeterwa, the IFC’s regional industry director for infrastructure in Africa.

“In many areas of the continent the wind tends to blow strongest at night and in the early morning,” she adds. “It is very complementary to solar which only generates during the day.”

Yet progress in harnessing power from winds has been limited. The Global Wind Energy Council notes that Africa is only using 0.01% of the 59,000 gigawatts (GW) that the IFC says is available on the continent. And according to data published by IRENA in April, only three African countries – Egypt, Morocco and South Africa – have installed more than 1 GW of wind energy capacity.

“The development of a windfarm is much more complicated and costly than that for a solar plant,” says Vuyo Ntoi, joint-MD at African Infrastructure Investment Managers. Before developers can begin putting turbines in the ground, they need to collect data on the wind resources available at a possible site. This can be an expensive and lengthy process.

“For solar, short-term irradiation data can be readily purchased (at low cost) and used, while for a windfarm a longer programme of wind monitoring on-site at the proposed hub-height is required to underpin the project’s bankability.”

Ntoi adds that wind is generally less suited to smaller projects, some of which may generate off-grid electricity, compared to solar. Wind, he says, “does not easily lend itself to implementation outside of government led programmes,” owing to the “nature of its permitting and procurement complexity, lack of co-location ability and hence reliance on national grids, plus the need for scale”.

The result is that wind developments are unlikely to proceed without a reliable off-taker. These are hard to come by in Africa. “There is real experience of payment difficulties with financially constrained utilities across the continent,” says Ntoi. “Wind developers as with other energy developers are loath to develop projects into an ecosystem with poor credit quality where generators will not get the contractual payments they are entitled to.”

Lack of creditworthiness is ‘core bottleneck’

Chris Chijiutomi, managing director and head of infrastructure equity for Africa and Pakistan at British International Investment, agrees that the lack of creditworthiness among African utilities is a “core bottleneck”. Another challenge, he adds, is “the general indebtedness of African countries, in terms of governments being able to offer guarantees that would then allow the private sector to know that they can come in an invest.”

“The poor fiscal positions of a lot of countries,” says Chijiutomi, “is now creating limiting space for them to offer sovereign guarantees or letter of support needed to ensure contractual obligations are met.”

“The interiors of Chad, Sudan, Niger and Mauritania are hard to access, and the state has very limited presence in these remote regions,” he says. “Northern Nigeria has some potential and huge demand, but major security challenges.”

Wind project developers in Africa, as throughout the world, also face challenges in addressing community opposition to new facilities. Such issues have been particularly intense in Kenya. A man was shot dead by police during protests against a planned windfarm in Kinangop in 2015; the $144m project was cancelled the following year.

The Lake Turkana wind power project – the largest in Africa – has also faced sustained opposition. Last year, a Kenyan court ruled that title deeds for the project site were acquired in an irregular manner. The ruling did not cancel the deeds, but paves the way for the local community to receive compensation.

The fact that the turbines that make up a windfarm are likely to be dispersed over a wide area adds a layer of complexity. “When it comes to wind, the sites are not necessarily standalone, or defined in an ideal square area,” says Chijiutomi. “You’re then having to deal with a lot more community and a lot more environmental and social issues associated with that.”

Some countries have attempted to evade the social conflicts around wind farms by prioritising offshore developments. In Africa, however, the development of significant offshore wind capacity appears a distant prospect. Even South Africa, a leader in the development of onshore wind power, has yet to see significant movement towards harnessing its offshore resources. Niveshen Govender, CEO of the South African Wind Energy Association, reports that the country is unlikely to see offshore projects until at least 2030.

“A lot of the deterrent around offshore is more around the capital costs,” says Chijiutomi. He cites the heavy cost of “getting the installation done offshore, but more importantly, getting the connecting transmission lines to where the electricity is needed”.

In fact, the challenge of connecting turbines to transmission lines is also a major problem for onshore projects – especially for those located in remote areas, far from existing grid infrastructure. “The worst thing that can happen – and has happened in some instances – is to have the power plant ready but the grid connection infrastructure isn’t,” warns Chijiutomi. “Then the government or whoever the off-taker is, is paying for energy that they can’t use because there’s no grid connection.”

This is precisely the situation that afflicted the Lake Turkana project. The windfarm itself was completed on schedule in 2017. But the Kenyan government fell behind in the construction of a new 272-mile transmission line, after the Italian company it had hired to build the line went bankrupt. Electricity from the project was not delivered to the grid until 15 months after the turbines were completed.

The Lake Turkana project is hardly alone among complex infrastructure projects in facing delays. Indeed, despite its troubles, it now supplies 17% of Kenya’s electricity generation capacity and was cited by management consultants BCG as a “best practice” example of an energy project in Africa.

Further insights in scaling a wind rollout come from South Africa. The development of wind power in the country was hamstrung for several years during the rule of its disgraced former president, Jacob Zuma. Since 2018, however, its independent power producer programme has regained momentum. A dozen wind projects were given the go-ahead that year, followed by another 12 in November 2021. A further bidding round kicked off just six months later.

The regular nature of bidding rounds has proven key to enabling developers to achieve scale and reduce costs. “With each project procurement round, the tariff for wind energy has reduced considerably,” Govender points out. “Policy shifts indicate a clear direction in terms of plans to procure new generation capacity on an ongoing basis, in line with the energy roadmap, which sees 14.4 GW of new wind power over the next decade.”

Ntoi agrees that “regular, predictable and repeatable government backed procurement is probably the most important action that will enable large scale wind power deployment in Africa.”

He notes that South Africa has been “programmatic, therefore predictable” in its approach to developing the sector. “Parties have developed windfarms, with all the associated costs and effort, in order to bid into the renewable energy procurement process. Because it’s a programme, developers know that there is repeat business and that if you are not successful in one round, there will be another to follow.”

The growing role of wind in South Africa highlights how the technology can ultimately contribute to closing the continent’s electricity gap. South Africa is, of course, an outlier in the way that its electricity market is considerably larger than in most African countries.

But, says Chijiutomi, the extension of cross-border electricity transmission infrastructure could allow smaller countries to play host to large-scale windfarms. “I think there’s also an opportunity where some of these countries that maybe have the wind resource, but their grid isn’t stable, they could be a producer of the wind resource and be able to sell it to neighbouring countries.”

What Can Be Done To Achieve Climate Justice For Africa