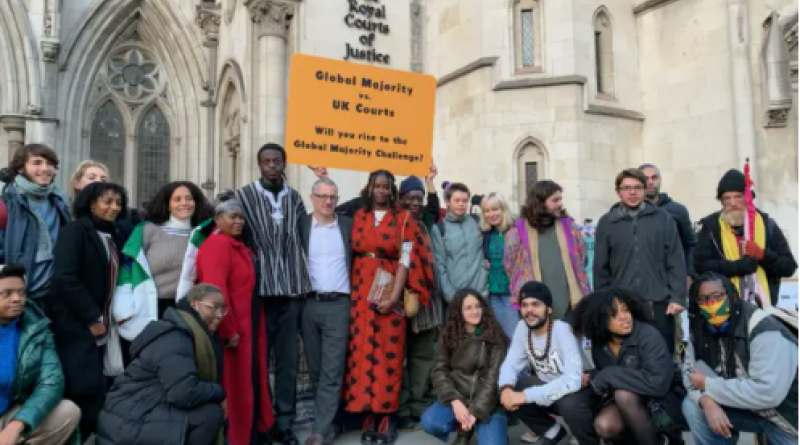 Three young people are taking legal action against the prime minister, accusing him of breaching his legal obligations to take “practical and effective measures” to tackle the climate crisis.

In a high court hearing in London on Thursday, Adetola Onamade, 24, Jerry Amokwandoh, 22, and Marina Tricks, 20, claimed the government was breaching their rights under the Human Rights Act to life and to family life by failing to do what was necessary to avert environmental disaster.

They argue that Boris Johnson’s government is discriminating against the younger generation and people in the global south who will bear the brunt of the climate crisis.

Backed by the charity Plan B Earth, the hearing was an application to allow the case to go to a full hearing, with a judge expected to respond with a decision in the coming days.

The environmental lawyer Tim Crosland of Plan B Earth told the court the three claimants’ case was “compelling, vital and deserves a fair hearing”.

“The defendants know that climate change is an urgent threat to life. They know its impacts hit hardest for groups exposed to disproportionate and discriminatory risks, including the claimants. They know what needs to be done but they are not doing it,” he said.

He added that the claim had been brought about because of the government’s failure to take the required action to meet statutory climate targets. “We have a credibility gap between words and action – that is at best neglect of the defendant’s most profound responsibilities and legal obligation for which this court should be ready to hold them to account.”

Co-claimant Onamade said it was “cynical and condescending” for the defendants to suggest their motivations for bringing the case to court were “disingenuous” or that they were “being tokenised” as young people of African heritage.

Reading from her witness statement, she said: “When I see the government breaking its own commitments under international law, including the Paris agreement, and the duty to prevent harm, the impact on me is profound.

“Those breaches are directly impacting my own family and heritage communities, which are an inextricable part of my own family life. My own mental health is bound up with the impact and experiences of my global family.

“People without that family may be able to blind themselves to what is happening in a way that is not possible when it’s your family or friends on the frontline or in these sacrificed zones, that have been engineered by the policies of countries such as the UK.”

She was joined in court by fellow claimant Amokwandoh, although the third claimant, Tricks, was not in attendance.

Richard Honey QC, representing the prime minister, the Treasury and the business secretary, Kwasi Kwarteng, in court, argued there should be no full hearing on the ground that “the Human Rights Act does not give legal effect to the Paris agreement provisions and the court has no power to consider if the UK is acting in breach of it”.

He said: “The claimant’s case is essentially based on the potential that climate change will cause social and economic breakdown and that is … clearly a generalised and hypothetical future risk.

“It is, in my submission, not credible to argue that the UK government policies on climate change are directly affecting the lives of individuals in south London in 2021. Any risks are too remote for them to be victims today.”

Honey added: “The evidence does not show that UK government climate policy on climate change creates a threat to the claimants right to life and does not show it is directly or seriously effecting the claimant’s health.”

A demonstration was held outside the court building before the application was heard, with dozens of young people gathering and displaying banners supporting the case.

The application will now be considered by Justice Bourne before the claimants find out whether they will receive a full hearing.

A government spokesperson said: “We do not comment on ongoing legal proceedings.”