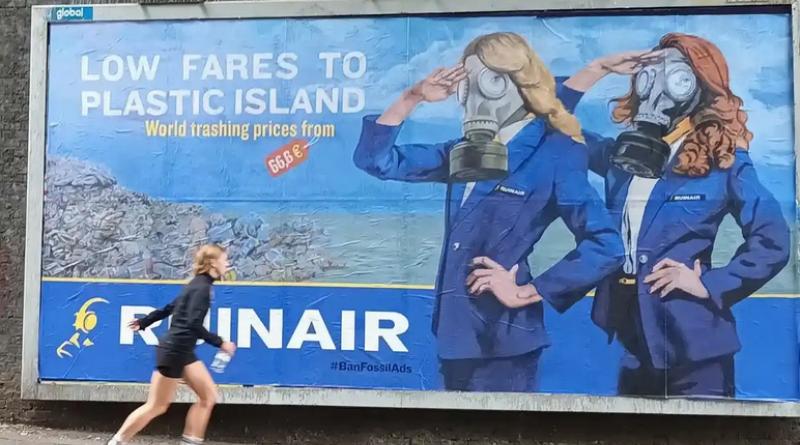 As Kate, 23, walked out of Seven Sisters station, in Tottenham, north London, she noticed an airline advertisement attracting unusual attention.

“I was on my way back home, I was coming out of the station, and I saw two people taking pictures of the billboard,” she said. “I thought at first it was just a normal airline ad, so I just walked past. Then I did a bit of a double take.

Art activists have filled more than 500 advertising sites across Europe with satirical artworks highlighting how flying is fuelling the climate crisis – and the role of the advertising industry in helping cover it up.

In recent days, at sites in London, Bristol, Manchester, Sheffield and Brighton, and 11 other European cities, activists have pasted over the usual paid-for adverts with artworks highlighting the climate trashing effects of the aviation industry.

The billboard in Seven Sisters was one – an artwork created by Michelle Tylicki. It showed the view across an outstretched aircraft wing as it soared through the sky – above landscape ablaze with raging wildfires.

“Fly responsibly? Creating a less sustainable future,” its slogan read. In the bottom right corner was the logo of Dutch airline KLM. “Currently being sued for greenwashing,” it added. The airline is facing legal action over adverts that campaigners say are misleading.

They highlight the large carbon footprint of flying, that the majority of flights are taken by a tiny fraction of the total population, and that airlines have missed all but one of the industry’s self-imposed sustainability targets.

All but one of the sites were used without permission, a spokesperson said, by activists and artists from the anonymous Brandalism group and the Subvertisers International network across Europe. Videos shot by the group showed activists wearing hi-vis vests and Covid-style face masks working in broad daylight with telescopic ladders.

Tona Merriman from Brandalism said: “The allure and glamour of high-carbon lifestyles such as frequent flying has been purposefully crafted by the advertising industry and shows no signs of relenting – despite one of the hottest summers on record.

Advertising agencies such as Ogilvy, VCCP, Dentsu, DDB Munchen need to consider their role in driving up emissions for airlines they work for such as British Airways, Easyjet, KLM and Lufthansa. We call on employees in those firms to refuse work for high carbon clients.”

Kate, who preferred not to give her surname for work reasons, said she was impressed by the bold campaign. “I think because I did such a double take about it, probably a lot of other people will experience that too, and I think it sticks in your mind more,” she said.