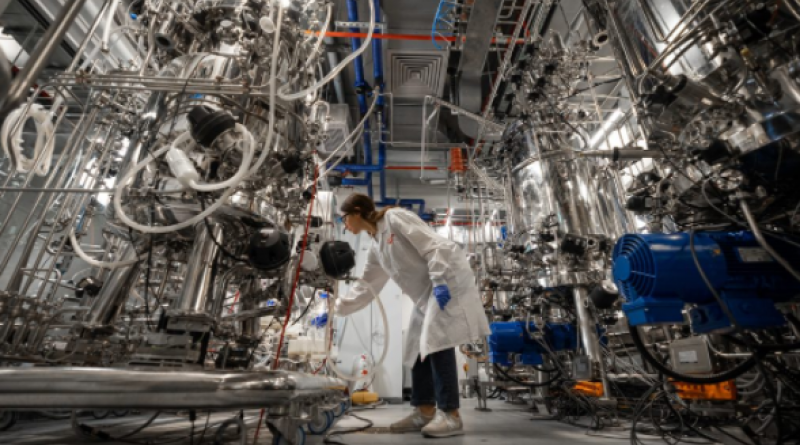 It can produce up to 500 kilograms of cultured products per day.

The facility has made scalable cell-based meat production a reality, with a production equivalent to 5,000 hamburgers per day. Israel biotech company behind it described it as a key stepping stone in efforts to scale up its operations, hoping to bring their products to the supermarket’s shelves by 2022.

Real meat, cruelty free — and good for the environment

The company claims its cultured meat generates 80% less greenhouse emissions, uses 99% less land, and consumes 96% less water than traditional meat production. They will produce cultured chicken, pork, lamb and beef without the use of animal serum or genetic modification and about 20 times faster than traditional agriculture.

Most lab-grown meat is produced by two methodologies, either using plant products as their starting point (such as the products offered by the likes of Impossible foods and Beyond Meat), or starting with real cells harvested from live animals. The latter is essentially real meat — it’s “cloned” with cells that are nurtured in bioreactors and fed the same nutrients as the living animals, which enable them to grow and multiply.

Multiple other startups are already using this approach, turning animal cells into edible portions. Their own method involves no genetic modification and includes what the company describes as a “media rejuvenation process,” removing waste products more efficiently than the current industry standard.

The cultured meat industry is booming and is expected to reach $352.4 million by 2028. The prices are also going down dramatically: the first “grown” burger cost $330,000 to produce in 2013, and now, companies can create a patty for under $10. It’s not clear how much one burger grown in the new facility will cost, but mass production is expected to scale the costs further down. The company suggests a price tag comparable to regular burgers.

“After demonstrating that cultured meat can reach cost parity faster than the market anticipated, this production facility is the real game-changer,” Yaakov Nahmias, the company’s founder, said in a statement. “Our goal is to make cultured meat affordable for everyone, while ensuring we produce delicious food that is both healthy and sustainable.”

With global population expected to surpass nine billion by 2050, the UN estimates 70% more food will be needed by then to fulfill the demand of the growing population. This is a massive challenge due to resource and arable land limitations. Meanwhile, meat consumption is on the rise, especially in growing middle-class developing countries.

More efficient ways of protein production are being developed to sustain the growing global population while complying with today’s challenges, such as environmental and animal welfare issues. Among the solutions, cultured meat is presented as a sustainable alternative for consumers not willing to cut on meat consumption.

The cultured meat industry now spans more than 75 companies. As pilot plants take the technology out of the lab, Eat Just became the first company to sell cell-grown chicken in a restaurant in Singapore. If consumers take to these products, the market could reach $25 billion by 2030, according to a report last week by McKinsey consultancy.

Since the first prototypes, startups have cut costs by 99%. Future Meat Technologies claims the lowest price for cultured chicken breast. It’s managed to cut the cost to $4 per 100 grams, a fraction of the original price, and plans to cut it by half again by the end of 2022. The company wants to start offering its products in the US by the end of next year.

Crying about hamburgers is dead-end on climate crisis, Republicans warned