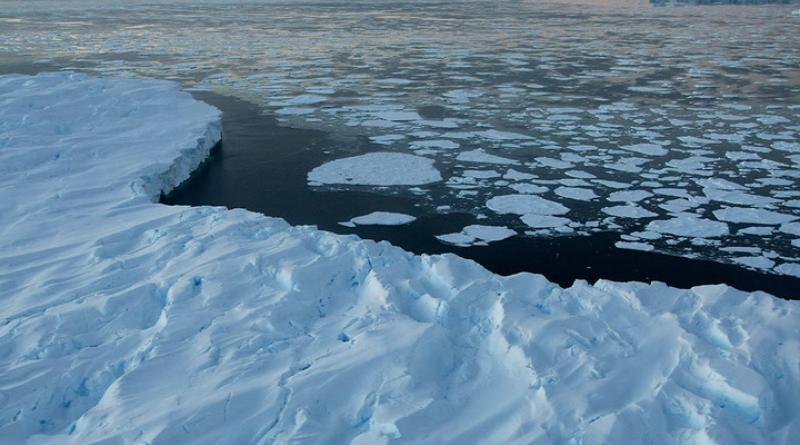 The seven hottest years on record were the last seven – by a clear margin, scientists say

Scientists have revealed that 2021 was the fifth-hottest year on record, as emissions of greenhouse gases carbon dioxide and methane, the main drivers of the climate crisis, continue to rise.

The annual analysis from the European Union’s Copernicus Climate Change Service (C3S) also found that the seven hottest years on record were the last seven, by a clear margin.

While 2021 was one of the cooler years out of the last seven (on a par with 2015 and 2018), Europe still experienced its warmest summer on record, according to the report published on Monday. 2020 and 2016 remain tied as the hottest years on record.

The lower average temperature was in part due to La Nina conditions in the first months of 2021 – a climate phenomenon that causes colder waters in the Pacific Ocean.

The annual average temperature globally was 1.1-1.2C higher than at the beginning of the industrial era in the mid-19th century.

The adverse effects of rising temperatures were evident in the number of extreme events around the world over the past 12 months. Summer 2021 brought deadly heatwaves and floods to central Europe, with Germany, Belgium, Luxembourg and the Netherlands heavily affected.

In Sicily, a temperature of 48.8C was recorded – breaking the European record by 0.8C – amid a prolonged heatwave in Greece, Spain and Italy. 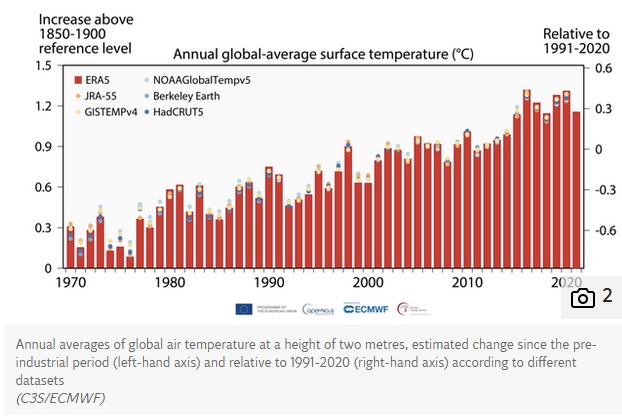 Parts of North America also experienced significant temperature anomalies in 2021, resulting in the warmest June on record for the continent. In the northwest US and Canada, an “exceptional” heatwave descended, with maximum temperature records broken repeatedly on consecutive days.

The small town of Lytton, British Columbia, hit 49.6C in June, breaking Canada’s maximum temperature record. An international team of climate scientists concluded that the record heat would have been “virtually impossible” without human-driven global heating.

The hot and dry conditions drove raging wildfires throughout the summer. The Dixie fire, the second largest fire recorded in California’s history, became the first ever to crest the Sierra Nevada mountain range. Along with widespread destruction, pollution from the wildfire led to a drop in air quality for thousands of people in the west and beyond, as particulate matter drifted across the US.

“2021 was yet another year of extreme temperatures, with the hottest summer in Europe, heatwaves in the Mediterranean, not to mention the unprecedented high temperatures in North America,” said Carlo Buontempo, Director of the C3S.

“The last seven years have been the seven warmest on record. These events are a stark reminder of the need to change our ways, take decisive and effective steps towards a sustainable society, and work towards reducing net carbon emissions.”

However, despite a temporary dip due to the Covid-19 pandemic, global concentrations of carbon dioxide are still steadily rising, according to preliminary analysis of satellite data.

Concentrations of the potent greenhouse gas methane are growing “very substantially”, C3S scientists noted, and have slightly increased on the 2020 growth rate.

Climate experts noted that figures for both 2020 and 2021 were “very high” compared to methane rates over the preceding two decades, saying that “at present it is not fully understood why this is the case”.

“The identification of the origin of the increase is challenging as methane has many sources, with some anthropogenic (eg exploitation of oil and gas fields) but also some natural or semi-natural ones (eg wetlands),” the European agency’s report noted.

Wildfires around the world, but particularly those in Siberia, have added to the carbon spewing into the atmosphere. North America experienced the highest level of carbon emissions from summer wildfires since records began in 2003.

“It gets difficult to say something new each time we see signs of another nail in the planetary coffin!” wrote Professor Sir Brian Hoskins, chair of the Grantham Institute for Climate Change and the Environment at Imperial College London, in a statement.

“Yet another warning of what we are doing to our planetary home. Real action to curb our greenhouse gas emissions in the UK and globally is desperately needed.”

To stabilize Earth’s temperature and prevent an ever-worsening spiral of climate disasters, nations have pledged to reach net-zero emissions by 2050. This means that greenhouse gas emissions, largely caused by the burning of fossil fuels, must be brought down by around 50 per cent by the end of this decade.

The annual European State of the Climate report from C3S will be published in April 2022.