17th Session of the UN Forum on Forests 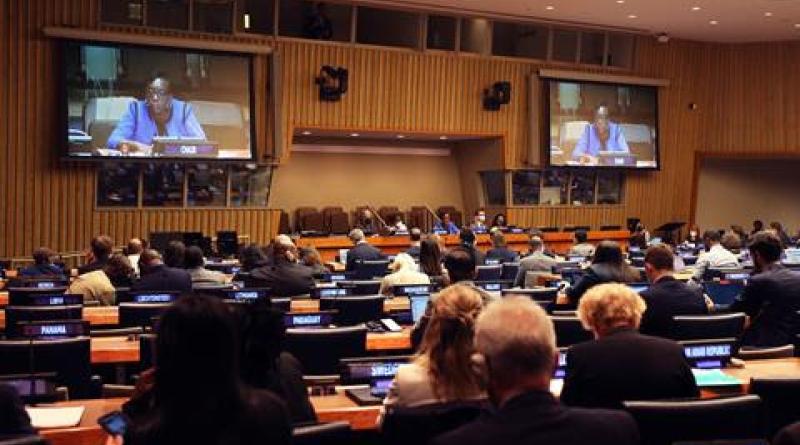 The focus of the opening day of the 17th session of the United Nations Forum on Forests (UNFF17) was a high-level roundtable on the UNFF response to, role in, and expectations from forest-related multilateral developments. Members of the Forum also started providing updates on their actions in support of the three UNFF thematic priorities for 2021-2022. These will continue on Tuesday.

UNFF17 Vice-Chair Jesse Mahoney (Australia) opened the meeting. He recalled the election of Bureau members for UNFF16 and 17 following the silence procedure pursuant to ECOSOC decisions 2020/205, 2020/206, and 2020/219, including the following Vice-Chairs in addition to himself: Musah Abu-Juam (Ghana), Tomasz Markiewicz (Poland), and Javad Momeni (Iran). He added that Momeni had been appointed rapporteur for UNFF17.

He noted that UNFF16 Chair Kitty Sweeb (Suriname) had completed her tenure as Ambassador to the UN and that the Latin American and Caribbean Regional Group had nominated Miriam MacIntosh (Suriname) to serve as UNFF17 Chair. Delegates elected MacIntosh by acclamation.

Delegates approved the provisional agenda (E/CN.18/2022/1) and the organization of work, as proposed by the Chair.

Updates on Voluntary National Contributions (VNCs) and Follow-up Related to the Thematic Priorities:

At the end of the session, the Secretariat, in response to Argentina and Brazil, stressed that the intention of the Secretariat is not to go beyond the mandate of the UNFF nor to encroach on other international agreements such as the SDGs.

The Secretariat introduced the Secretariat Note on the challenges faced by countries, strategies adopted, and recovery measures taken by countries to reduce the impact of the COVID-19 pandemic on forests and the forest sector (E/CN.18/2022/7).

High-level Roundtable on UNFF response to, role in, and expectations from forest-related multilateral developments

Kelapile said recognition of forests’ roles is increasing, as witnessed by the Glasgow Leader’s Declaration. Shahid called for using forests as one of the best tools for achieving commitments under the Paris Agreement and the 2030 Agenda for Sustainable Development, through inclusive solutions recognizing Indigenous Peoples’ rights. Noting the High-level Political Forum (HLPF) on Sustainable Development will review progress toward SDG 15 on life on land in July 2022, Spatolisano called for the UNFF to galvanize efforts to halt deforestation by 2030.

Juliette Biao Koudenoukpo, Director, UNFF Secretariat, presented each panelist with a question concerning the UNFF response to, role in, and expectations from forest-related multilateral developments.

Elizabeth Maruma Mrema, Executive Secretary, CONVENTION ON BIOLOGICAL DIVERSITY (CBD), highlighted that following the adoption of the post-2022 global biodiversity framework both organizations could work together by supporting, with the full participation of local communities and Indigenous Peoples: countries’ national policy frameworks, access to financing, and countries’ planning and implementation.

Jyotsna Puri, INTERNATIONAL FUND FOR AGRICULTURAL DEVELOPMENT (IFAD), suggested IFAD and UNFF could work together in supporting sustainable food systems, though actions to recognize the role of rural and small-scale producers and Indigenous Peoples, and to leverage and scale up existing solutions, including clean agricultural technology.

Andrew Steer, President and Chief Executive Officer, BEZOS EARTH FUND, underscored that strong policy approaches, leadership and adequate financing are essential to achieving the Glasgow commitments. He called for the UNFF to engage with philanthropies by bringing forward bold but practical ideas.

Anne Nuorgam, Chair, UN PERMANENT FORUM ON INDIGENOUS ISSUES, called for the international community to develop a set of guidelines for conservation and Indigenous engagement, particularly as countries begin to identify areas to meet their commitment to conserve 30% of lands and waters by 2030.

Jayathma Wickramanayake, UN Secretary-General’s Special Envoy on Youth, called on delegates to work with Youth and support the Youth Call for Action presented at the XV World Forestry Congress.

During the discussion, delegates remarked on the potential role of the Forum to help turn the tide on deforestation, mobilize financing for forests, and leverage partnerships and strengthen stakeholder engagement. The EU called for supporting a One Health approach, stressing forests in post-COVID recovery plans, and investment from all quarters to realize the GFGs.

CAMEROON shared their concern that mechanisms for financing have eluded countries in the Congo Basin subregion. The REPUBLIC OF CONGO similarly highlighted the currently low deforestation rate in the region but underscored the need for financing in the context of forest management projects in order to stem deforestation and meet growing energy needs.

The REPUBLIC OF KOREA reminded parties to address the Seoul Forest Declaration, which conveys a series of messages to encourage actions for green, healthy and resilient forests. AUSTRALIA expressed its support for the sustainable use of forests, including the vital role of timber as a renewable resource. NICARAGUA called for funding, without exclusion, the expansion and conservation of forests, as the best way to fight climate change. BANGLADESH called for more funding for its efforts on sustainable landscaping. MALAYSIA stressed the importance of the principle of common but differentiated responsibilities.

GUYANA called for more support to countries that have maintained a high rate of forest cover. COSTA RICA emphasized the role of payment for ecosystem services in combatting deforestation and promoting reforestation and urged taking farming, fisheries, and other interests into account when designing forestry measures if they are to succeed.

A number of countries shared their recent achievements. GHANA highlighted its Green Ghana Day initiative aiming to reforest Ghana. The US shared a recent Executive Order aimed at strengthening US forests, boosting wildlife resilience, and combatting deforestation. CHINA spoke of their strengthened legal framework for forest protection and their wide-scale domestic efforts to promote afforestation and combat deforestation. GREECE highlighted its new national forestry inventory system and its reforestation plan. PERU discussed its national strategy for the restoration of forest ecosystems and degraded lands.

Countries also discussed their visions for the UNFF going forward. BRAZIL recommended that between now and 2030 the UNFF should emphasize increasing access to and transfer of environmentally sound technology and suggested it could also serve as a platform to share lessons on innovative financing, including by engaging relevant stakeholders. MEXICO welcomed the work of the UNFF in carrying out the evaluation on the effects of the pandemic on forests and the forest sector and expressed their support for holding parallel events during UNFF 2023 to share lessons learned. INDONESIA shared their view of the role of the UNFF to further enhance international cooperation in the international forestry sector, in line with the three pillars of sustainable development and taking into account different national circumstances. ARGENTINA called for promoting synergies while avoiding duplication of efforts, and for a strengthening mechanism for the Glasgow Declaration. UGANDA praised the help given to its efforts by the Global Forest Financing Facilitation Network (GFFFN) to help it get financing for its efforts to increase forest cover.

Liu Zhenmin, UN Under-Secretary-General for Economic and Social Affairs, closed the roundtable by calling for:

Smiles were bright even beneath masks as UNFF delegates met for the first time in person since the beginning of the COVID-19 pandemic. The hybrid format of the meeting was not without its technical challenges. Substantively, delegates were quite engaged and interested in the High-level Roundtable on how UNFF relates to other multilateral processes, which gives food for thought for the upcoming midterm review in 2024 of the effectiveness of the international arrangement on forests.

Tropical forests can regenerate in just 20 years without human interference