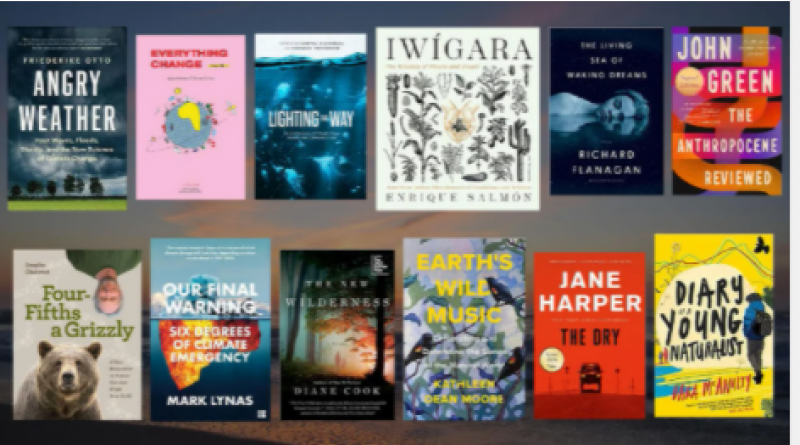 Every summer there comes a lift when we finally escape the last cold snaps of spring, the final exams and papers of school, or the reports (and taxes) of the fiscal year. This year we are doubly buoyed by the easing of pandemic restrictions.

For such a time we want books that make us read briskly, connect us to nature, or, like vacations, take us to faraway places. Those who actually do travel, however, also want books that can be consumed in smaller pieces; stories and essays that can be finished in a single sitting.

YCC's 2021 summer list starts off with a nod to the start of hurricane season, celebrates the American edition of the nature diary by the young autistic Irishman Dara McAnulty, and applauds the release of the paperback edition for the sequel to Mark Lynas's climate classic, Six Degrees.

The next three books connect readers with nature – through animal songs, native plants, and their own genetic inheritances.

The last six books offer fictional journeys through our climate changed world. Some are short day trips or overnight stays. Others entail longer bookings, with multiple locations. One is paired with a movie, which may be appearing in a theater reopening near you soon. And at least two can be downloaded to your computer or tablet – one for free.

As always, the descriptions of the books are drawn from copy provided by the publishers. Where two dates of publication are included, the second is for the release of the paperback.

Weather disasters are becoming more frequent each year, but not everyone agrees on what causes them. Renowned University of Oxford researcher Friederike Otto provides an answer with attribution science, a revolutionary method for pinpointing the role of climate change in extreme weather events. Anchoring her book with the gripping, day-by-day story of Hurricane Harvey, which caused over a hundred deaths and $125 billion in damage in 2017, Otto reveals how attribution science works in real time, and determines that Harvey's terrifying floods were three times more likely to occur due to human-induced climate change. The research laid out in this groundbreaking book will have profound impacts, both today and in the future.

"I was diagnosed with Asperger's/autism aged five … By age seven I knew I was very different, I got used to the isolation, my inability to break through into the world of talking about football. Then came the bullying. Nature became more than an escape; it became a life-support system." Diary of a Young Naturalist chronicles the turning of 15-year-old Dara McAnulty's world. Through a year in his home patch in Northern Ireland, Dara spent the seasons writing. These moving entries about his connection to wildlife and the way he sees the world are raw in their telling. Diary of a Young Naturalist portrays Dara's intense connection to the natural world, and his perspective as a teenager juggling exams and friendships alongside a life of campaigning.

We are living in a climate emergency. But how much worse could it get? What kind of future can our children expect? Rigorously cataloguing the very latest climate science, Mark Lynas explores the course we have set for Earth over the next century and beyond. Degree by terrifying degree, he charts the likely consequences of global heating and the ensuing climate catastrophe. The escalating consequences of climate change can still be avoided, but time is running out. We must largely stop burning fossil fuels within a decade if we are to save the coral reefs and the Arctic. If we fail, then we risk crossing tipping points that could push global climate chaos out of humanity's control, turning billions into climate refugees. This really is our final warning.

Both joyous and somber, these new and selected essays span Kathleen Dean Moore's career as a tireless advocate for environmental activism in the face of climate change. Meditating on the music of the natural world, Moore celebrates the call of loons, howl of wolves, bellow of whales, laughter of children, and shriek of frogs, even as she warns of the threats against them. Each group of essays moves, as Moore herself has been moved, from celebration to lamentation to bewilderment and finally to the determination to act in defense of wild songs and the creatures who sing them. Music is the shivering urgency and exuberance of life ongoing. In a time of terrible silencing, Moore asks, who will forgive us if we do not save nature's songs?

The belief that all life-forms are inter-connected and share the same breath – known in the Rarámuri tribe as iwígara – has resulted in a treasury of knowledge about the natural world, passed down for millennia by native cultures. Ethnobotanist Enrique Salmón builds on this concept of connection and highlights 80 plants revered by North America's indigenous peoples. Salmón teaches us the ways plants are used as food and medicine, the details of their identification and harvest, their important health benefits, plus their role in traditional stories and myths. Discover in these pages how the timeless wisdom of iwígara can enhance your own kinship with the natural world. Tap into thousands of years of plant knowledge.

Veteran environmental writer Douglas Chadwick presents an engaging series of personal essays that argue for the amazing interconnectedness of nature, advocating that the path toward conservation begins with how we see our place in the world. Four-Fifths a Grizzly shows that human DNA is not all that different from any other creature. We have a surprisingly close relationship with grizzly bears, sharing 80 percent of our DNA, (versus 60 percent similar to salmon, 40 percent the same as many insects). At the same time, our bodies are teeming with organisms, separate from ourselves but upon which we depend for survival. In fun, accessible stories. Chadwick presents examples of successful recoveries of species and habitats, with the thought that "we really can save a whole lot in a hurry."

The Anthropocene is the current geologic age, in which humans have profoundly reshaped the planet and its biodiversity. In this remarkable symphony of essays adapted and expanded from his groundbreaking podcast, bestselling author John Green reviews different facets of the human-centered planet on a five-star scale, charting the contradictions of contemporary humanity. As a species, we are both far too powerful and not nearly powerful enough, a paradox that came into sharp focus as we faced a global pandemic that both separated us and bound us together. Green's gift for storytelling shines throughout this masterful collection. The Anthropocene Reviewed is a open-hearted exploration of the paths we forge and a celebration of falling in love with Earth.

Anna's aged mother is dying. Condemned by her children's pity to living, subjected to increasingly desperate medical interventions, she turns her focus to her hospital window, through which she escapes into visions of horror and delight. Anna too feels the pull of the window. She begins to see that all around her, others are similarly vanishing, yet no one else notices. All Anna can do is keep her mother alive. But the window keeps opening wider, taking Anna and the reader ever deeper into an eerily beautiful story of grief and possibility, of loss and love. Hailed as Richard Flanagan's greatest novel yet, The Living Sea of Waking Dreams reveals what remains when the inferno beckons: one part elegy, one part dream, one part hope.

A collection of short stories by writers from around the world, exploring the climate crisis and how human responses to it will shape the futures we will inhabit. Everything Change, Volume III features stories in styles ranging from science fiction and fabulism to literary fiction, weird fiction, and action-thriller, all drawn from the 2020 Everything Change Climate Fiction Contest. The title Everything Change is drawn from a quote by Margaret Atwood, our first Imagination and Climate Futures lecturer in 2014. The contest and anthology are presented by the Imagination and Climate Futures Initiative at Arizona State University, a partnership of the Center for Science and the Imagination and the Virginia G. Piper Center for Creative Writing.

10. Lighting the Way: An Anthology of Short Plays about the Climate Crisis, edited by Chantal Bilodeau and Thomas Peterson (The Arctic Cycle 2020, 351 pages, $21.95 paperback)

Lighting the Way includes 49 inspiring plays by writers from around the world. The plays were commissioned for Climate Change Theatre Action 2019, a global distributed theatre festival that coincided with the 25th United Nations Conference of the Parties in Madrid. Contributors were charged to "give center stage to the unsung climate warriors and climate heroes lighting the way toward a just and sustainable future." Whether exploring visions of climate heroism, new tech-nologies like mango leather, or giving legal rights to nature, the plays go beyond the dystopian worlds and apocalyptic scenarios favored by blockbuster movies and sci-fi novels to tell nuanced and empowering stories – stories that give us the courage to fight for the world we all deserve.

Bea's five-year-old daughter, Agnes, is slowly wasting away, consumed by the smog and pollution of the overdeveloped metropolis that most of the population now calls home. If they stay in the city, Agnes will die. There is only one alternative: the Wilderness State, the last swath of untouched land. Bea, Agnes, and eighteen others volunteer to live in the Wilderness State, to see if humans can exist in nature without destroying it. Slowly and painfully, they learn to survive in a dangerous land, battling for power and control as they betray and save one another. At once a lament for our contempt for nature and a humane portrayal of what it means to be human, The New Wilderness is an extraordinary novel from a one-of-a-kind literary force.

After getting a note demanding his presence, Federal Agent Aaron Falk arrives in his hometown for the first time in decades to attend the funeral of his best friend, Luke. Twenty years ago when Falk was accused of murder, Luke was his alibi. Falk and his father fled under a cloud of suspicion, saved from prosecution only because of Luke's steadfast claim that the boys had been together at the time of the crime. But now more than one person knows they didn't tell the truth. Amid the worst drought in a century, Falk and the local detective question what really happened to Luke. Long-buried mysteries resurface. And Falk will find that small towns have always hidden bigsecrets. The Dry is now a major motion picture from IFC films, starring Eric Bana.

Michael is a professor in the University Writing Program at The George Washington University in Washington, D.C., where he has taught since 2005. Before completing his interdisciplinary Ph.D. at Penn State in 2002, Michael was the majority owner and senior manager of Svoboda's Books, an independent bookstore that served Penn State's University Park campus from 1983 to 2000.

12 Great Books on Climate and Environment to Gift This Holiday.