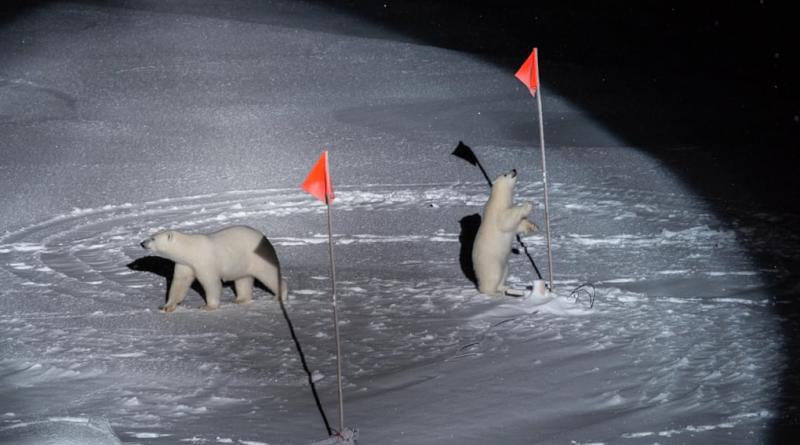 In the autumn of 2019, I joined an expedition to the Arctic. We set sail from Tromsø, Norway, on 20 September, on the Polarstern icebreaker. There were 100 people on board – 60 scientists and 40 crew – but the ship was big enough that it never felt crowded. There were people you didn’t see for days.

The plan was to find the perfect ice floe to anchor to, then drift for one year through the central Arctic Ocean and the six-month long night of the Arctic winter – about which we have almost no scientific data. The study was the first time that this oceanographic, sea ice, atmospheric, ecosystem and biogeochemistry research had ever been done at this scale. On 4 October, the ship turned off its engine in order to become frozen into the sea ice. That was the last day of daylight. The days got shorter very quickly, and the darkness was intense. Mostly it was overcast. You couldn’t see the stars. You couldn’t hear anyone speak, either, because of the constant wind.

Scientific research in extreme locations is always dictated by nature – the weather and the wildlife. We are only guests in the land. Since 2015, I’ve dedicated my work to raising awareness of the climate crisis in the polar regions. When we think about the moon landing, for example, we don’t think about the science it took to get there. We think about the photo of Neil Armstrong stepping on to the moon. This is what I’m striving for: an image for our imagination to latch on to when we think about the Arctic – the disappearing land of the polar bears.

In the Arctic, the ice is like soil: there is life above and beyond. If we take out the ice, an entire ecosystem can collapse and become extinct.

Six days after we switched our engines off I stepped out on to the deck in the evening. I had both of my cameras with me when I spotted these two polar bears. Because you could only see what was in the ship’s spotlight or your headlamp, them appearing like this felt like a gift. If we’d been out on the sea ice as opposed to on the ship, I would never have been able to get my camera out.

They were walking across the ice towards us, following the power cables that ran out from the ship to the different research stations we had set up. I ran across the deck and waited for the polar bears to get closer.

It was a mother and her cub, and they were sniffing around everything. It sounded as if the cub wasn’t happy – it was trailing behind its mother, crying like a child who doesn’t want to do something. The mother just kept walking. The fluttering of our flags caught their attention. Red flags on the ice meant “no entry”, and green flags, “go”, indicating where we could walk. These flags were only 20 to 30 metres away. The bears stood up on their hind paws to check them out.

Polar bears are dangerous, because they’re curious. If they’re hungry, they’ll see you as prey. Even if they don’t intend to harm you, they’re so strong that they can still kill you. There were two polar bear events out on the ice when I was a volunteer bear guard, which meant it was my responsibility to get the group back to safety. The first time was at the farthest station, 600 metres from the ship. I heard from the bridge that two bears had been spotted walking directly towards us. I told the scientists we had to pack up immediately. We were out with snowmobiles and space was tight on the sled. Some said: “No, we’ll wait here. You can go back with the snowmobile and come back for us with the second round.”

But I showed no mercy. I packed them on to the sled. I felt like a mother tiger protecting her cubs, my adrenaline was shooting sky high. And right when we had boarded, the bears appeared. It was close! We couldn’t say for sure, but we think they were the bears I had photographed.

The second time, I’d been standing guard outside a tent where two scientists were working, in a storm. I’d been there for two hours. The temperature was -35C (-31F), but with the wind it felt like -45C (-49F). I could no longer feel my hands. And then the trip-wire around the station was triggered and a flare went up, meaning we had to go back to the ship. You can’t see anything because it’s so dark, and you can’t hear anything because of the gales. It turned out that it wasn’t a polar bear but the wind that had triggered the alert.

You can return to Earth from the International Space Station in a capsule in several hours. But if something happened on the Polarstern, it would have taken a rescue boat two or three weeks to reach us. I spent three and a half months on the ship. And every time I stepped off it on to the ice, I felt like a little child – I was so excited. The darkness of the polar night is the thing I miss most. It doesn’t feel like any other place on Earth.

Low point: “Trying to figure out how to enter the world of documentary photography.”

Top tip: “Photograph from your heart.”

Most polar bears to disappear by 2100, study predicts.

These Days, It’s Not About the Polar Bears.

A proposed mine in Alaska will endanger brown bears – and much more.