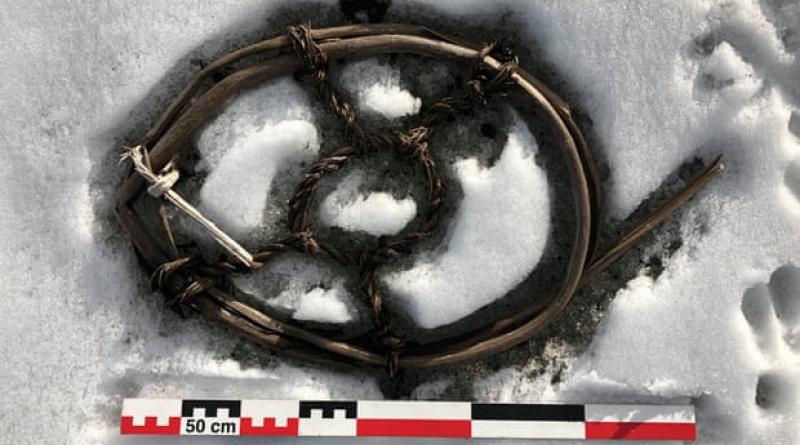 The retreat of a Norwegian mountain ice patch, which is melting because of climate change, has revealed a lost Viking-era mountain pass scattered with “spectacular” and perfectly preserved artefacts that had been dropped by the side of the road.

The pass, at Lendbreen in Norway’s mountainous central region, first came to the attention of local archaeologists in 2011, after a woollen tunic was discovered that was later dated to the third or fourth century AD. The ice has retreated significantly in the years since, exposing a wealth of artefacts including knitted mittens, leather shoes and arrows still with their feathers attached.

Though carbon dating of the finds reveals the pass was in use by farmers and travellers for a thousand years, from the Nordic iron age, around AD200-300, until it fell out of use after the Black Death in the 14th century, the bulk of the finds date from the period around AD1000, during the Viking era, when trade and mobility in the region were at their zenith.

Described as a “dream discovery” by glacial archaeologists, the finding was also a “poignant and evocative reminder of climate change”, said James Barrett, a medieval and environmental archaeologist at the University of Cambridge, who has been working with Norwegian archaeologists on the project since 2011.

“One is talking about artefacts that were put in the deep freeze 1,000 years ago, and later and earlier, and were taken out when we found them. So a textile is almost perfectly preserved, one might find arrows with the fletching perfectly preserved, with the sinew still in place, the glue that glued the feathers to the shaft. These are quite remarkable finds.”

Of the hundreds of discoveries exposed by the retreating ice, some are structural, such as stone-built cairns that would have guided travellers through the fog, or the remains of a small shelter. Other finds are products that were being transported by local farmers to and from their summer pastures, such as dairy products and fodder, or by traders potentially carrying them much further afield, including reindeer pelts and antlers.

Among them are delicate wooden items such as a small, wood-turned bit for a lamb or goat and a carved distaff for spinning wool - even a Bronze Age ski. Last summer’s melt exposed an item that archaeologists have identified as a snowshoe for horses - “a quite remarkable object in its own right”, according to Barrett.

While the objects are frequently “extraordinary”, he said, “what is really important archaeologically about them isn’t the individual objects, it’s the story that putting together all of the objects can tell you” about the pass and the people who travelled it.

Thanks to large-scale melting in 2019, most of the Lendbreen ice has retreated, meaning soon there will be nothing left to discover, said Barrett. “On the other hand, there are a lot of ice patches in the high elevations in [this part of Norway], so there will always be another - for the time being.”

The team’s discoveries are published in the journal Antiquity.