Race to zero: This graphic shows the rapidly falling cost of renewables. 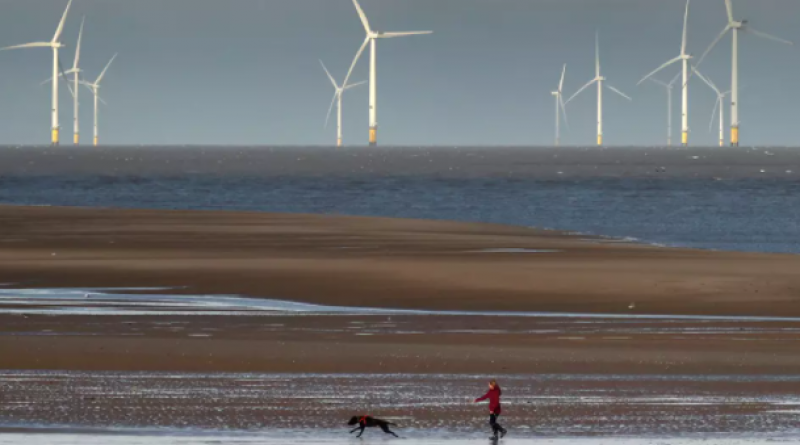 Renewable energy is not only cheaper than fossil fuels, but it’s undercutting them without subsidy – and is now the default choice for new electricity generation.

Renewables already account for almost 30% of global electricity output, according to the International Energy Agency. The IEA says the pandemic has slowed the roll-out of renewables and has called on governments to accelerate the transition to green energy after COVID-19.

Although all forms of renewable energy have become more competitive, the price of onshore wind and solar photovoltaic-generated power have both fallen below five US cents per kilowatt hour for the first time, the International Renewable Energy Agency (IRENA) says. Solar photovolaics has tumbled from nearly 8 times that figure just 10 years ago, while onshore wind has fallen steadily from nearly 9 cents per kilowatt hour in 2010.

Fossil fuel-fired power generation is estimated to cost between 5 and 18 cents per kilowatt hour, according to IRENA. 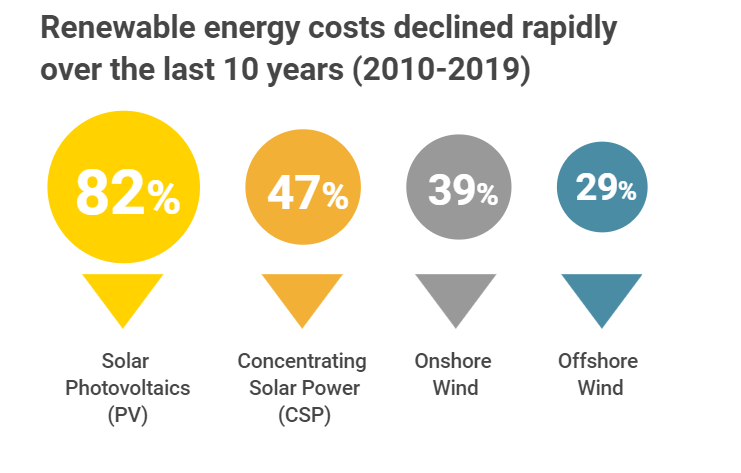 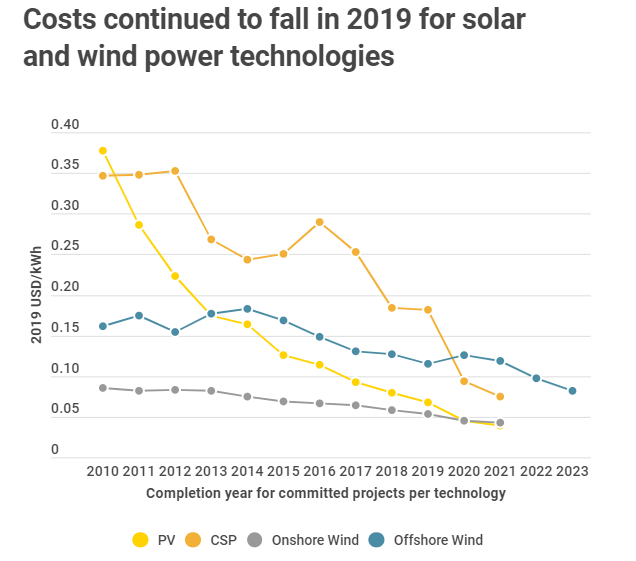 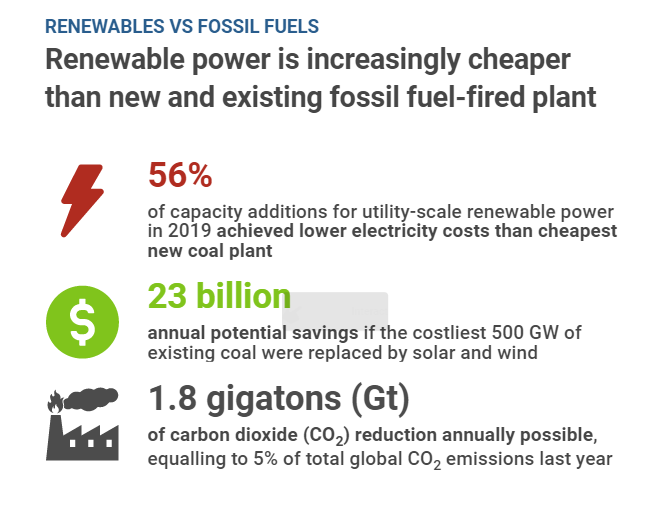 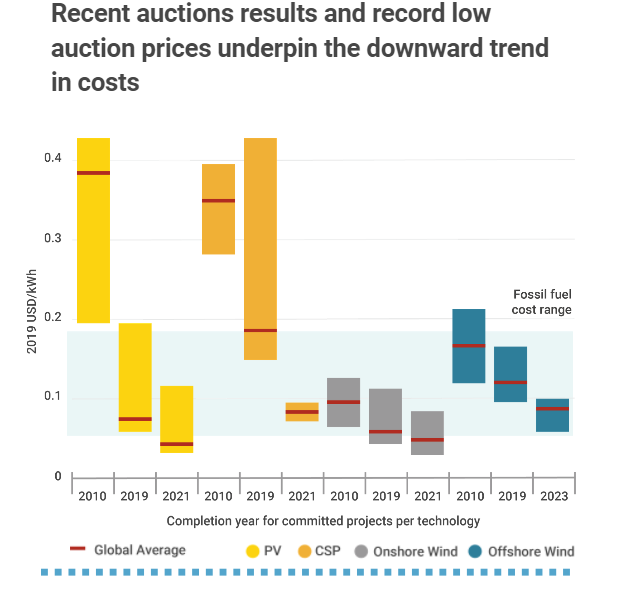 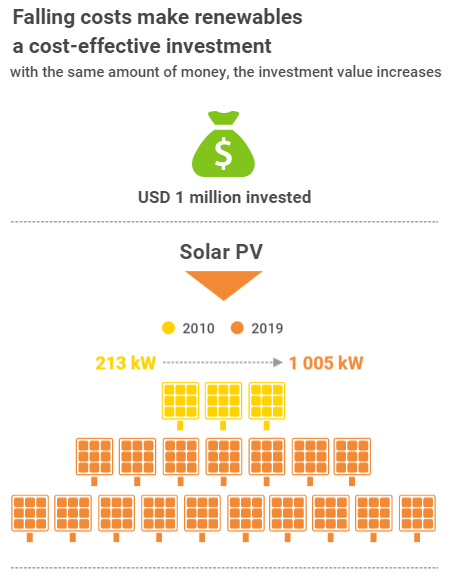 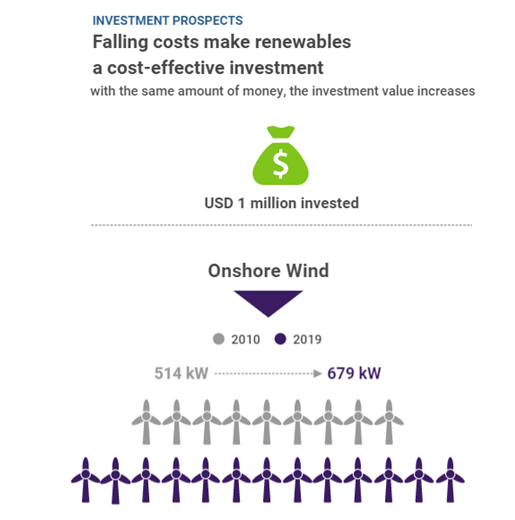 In April 2019, the United States generated more electricity from renewables than from coal for the first time. In the same month, the UK went for 18 days without using any coal to generate electricity.

IRENA says $23 billion could be wiped off the world’s energy bills if the costliest 500 gigawatts of coal-generating plant was replaced by solar and wind power. While switching generation from fossil fuels to renewables would reduce global CO2 emissions by 5%, it says.

Reasons to use coal to generate electricity are evaporating as renewables provide power more cheaply in the majority of cases, says IRENA. Over half of new renewable installations delivered generating costs that were lower than the cheapest comparable new coal-fired plant.

“We seem to be approaching a world in which 50% of electricity will be from renewable energy,” says Simon Weiher, Product Portfolio Manager of Hitachi ABB Power Grids, in a YouTube video. “Renewable generation seems unstoppable.”

He says there are three factors that mean renewables will continue to grow: public environmental concerns; falling renewable energy costs; and the fact the technologies are now available to make the renewable energy revolution happen.

“If there is one constant in today’s grid landscape, it is the clear expansion of renewable power. And based on the three strong and stable drivers, this isn’t going to change any time soon,” he adds.

On World Environment Day this year, the United Nations launched the Race to Zero, a global campaign to mobilize leadership and support from businesses, cities, regions and investors for a zero-carbon recovery and to accelerate action to reduce harmful climate-change emissions.

The World Economic Forum is hosting the Race to Zero Dialogues from 10 to 12 November, which will bring together business and public sector leaders to discuss ways of making a zero-carbon future a reality.

The event will debate how best to decarbonize industries including transport and fashion, as well as focus on protecting the oceans from the effects of climate change.

Renewables Could Cover More Than One-Third of Energy Demand in CESEC .