The oceans’ twilight zone must be studied now, before it is too late. 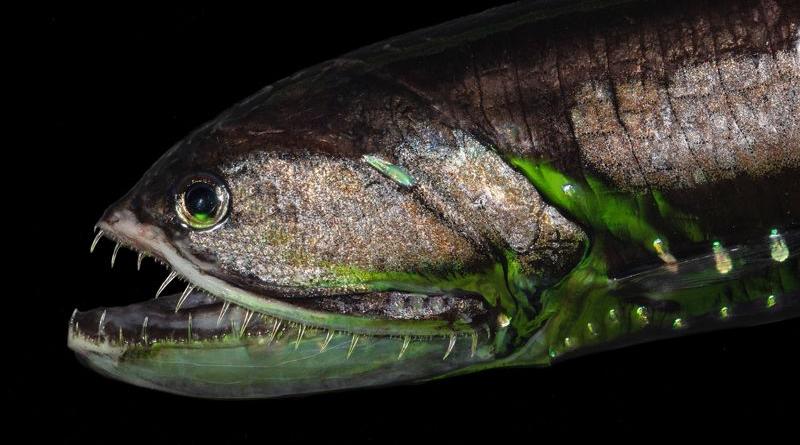 Exploitation and degradation of the mysterious layer between the sunlit ocean surface and the abyss jeopardize fish stocks and the climate.

The twilight zone contains the largest and least exploited fish stocks of the world’s oceans. Spanning from just below 200 metres to 1,000 metres deep, it is an interface between the well-studied marine life in the sunlit zone above and the ecosystems of the abyss below. It has a major role in removing carbon dioxide from the atmosphere and storing it for centuries or longer. The twilight zone is also privy to the largest migration on Earth. Huge numbers of fishes and zooplankton move hundreds of metres towards the surface each night to feed, before retreating back down at dawn.

Yet the zone is poorly understood — physically, biogeochemically and ecologically. Even the number of organisms that live there remains a mystery, let alone their diversity and function.

It is alarming, then, that this vast ocean domain is at risk in three ways — even before any of the potential consequences are understood1. First, the world’s growing population has an increasing need for food. Second, sea-floor mining for minerals and metals could release waste into the region2. And third, climate change is altering temperature, acidification and oxygen levels in ways that are likely to affect life there3.

The twilight zone is hard to study. Its organisms are difficult to sample and analyse, being sparsely distributed, elusive and often fragile. They also live at pressures of up to 100 atmospheres, which poses problems for laboratory-based investigations.

Critics might argue that waters near coasts and above shelves are more deserving of study, given the huge environmental pressures there, as well as their importance to societies. And, of course, they need attention. Sadly, however, it is too late to avoid widespread environmental damage to these inshore regions. Instead, research efforts and local policies must aim at mitigating the worst effects.

By contrast, the twilight zone is almost pristine. Moreover, the majority of it lies beyond national jurisdiction. This makes it of common interest and responsibility, and means that global agreement is necessary to manage it.

Here, we outline the steps needed to ensure that enough is known about this complex global ecosystem to inform decisions about the impacts of climate change and potential future exploitation. We call on the international marine research community to focus its attention on the twilight zone during the upcoming United Nations Decade of the Ocean, which runs from 2021 to 2030. In the spirit of the UN’s Sustainable Development Goals, we should seize the opportunity to establish a global policy that will protect this vast ecosystem for present and future generations.

At present, we know just enough about the twilight zone to recognize its importance in maintaining a healthy ocean.

Phytoplankton growing in the sunlit layer fuel multiple food-supply routes into the zone that sustain organisms from bacteria to giant squid. In the process of consuming this food, and each other, the twilight-zone animals produce CO2, consume oxygen and release nutrients back into the water (see ‘Twilight zone’). In the winter, cold, windy weather mixes water containing the recycled nutrients with water from the surface layer4. In this way, the twilight zone has an important role in supporting phytoplankton growth the next spring. 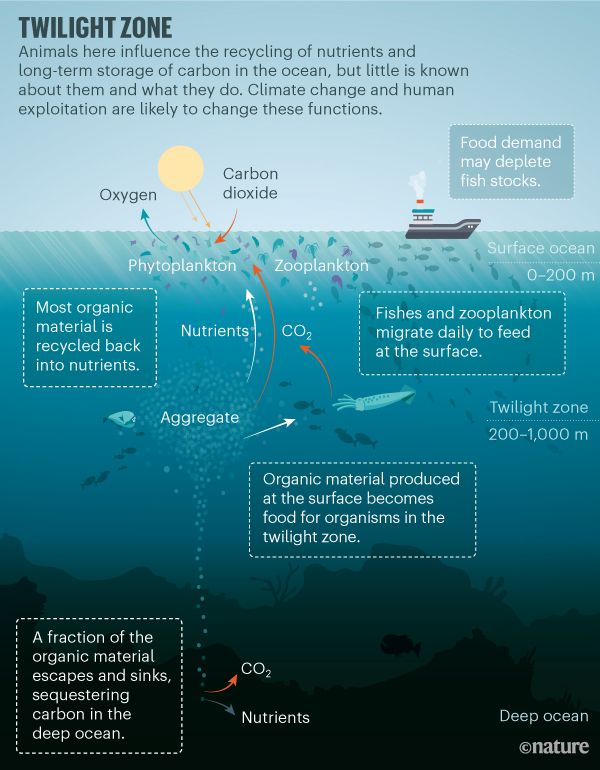 Although winter mixing can release carbon back into the atmosphere, a fraction of it ends up in deeper waters, where it can be locked away, typically for centuries. This downward transport of organic matter, mediated by life in the twilight zone, is called the biological carbon pump, and the twilight zone is central to its strength5. This deeper flux of material becomes food for the animals there. The small amount that eventually reaches the sea floor sustains everything from bacteria to sea cucumbers.

Unfortunately, little is known about how the twilight zone performs these roles. This makes it difficult to predict future ocean oxygen levels or how organic carbon will be stored in the long term. Moreover, the effects of climate change on ocean temperatures and oxygen levels will alter how the biological pump operates.

Knowledge gaps range from fundamental information, such as what species dwell there and what their metabolic rates are, to how they behave and adapt to their environment. Bacteria colonize ‘marine snow’ (sinking aggregates of organic material); krill form dense, localized swarms; and some fishes have evolved vision that is tuned to dawn and dusk. But how do such adaptations affect the functioning of the twilight zone?

The patchiness of the information makes it hard to predict how the twilight zone might respond to human pressures. For example, the fishing industry is likely to target species that are very abundant, such as elongated bristlemouth (Sigmops elongatus), but will also remove many other animals in the process. This could reduce the ecosystem’s resilience and change global nutrient and carbon cycles6.

The following three questions should be prioritized to plug these knowledge gaps.

How many organisms live in the twilight zone, and how diverse are they? Estimates for the volume of fishes there range between 1 billion and 20 billion tonnes7. Surface waters are estimated to hold 1 billion tonnes. (The world’s human population has a total weight of 0.5 billion tonnes.) But it is not clear what fraction of the organisms are siphonophores (relatives of jellyfish) or cephalopods (such as squid).

Which ecological processes transform and consume organic material? Marine snow is common in the twilight zone. Zooplankton could be breaking it up so that it forms a slow-sinking substrate for bacteria — a nutritious food for the zooplankton8. But this theory, known as microbial gardening, is yet to be tested.

How is organic material transported into and out of the twilight zone? Researchers need to determine the relative importance of a range of mechanisms that vary with location, time and depth9. These span from physical processes to animal behaviour. Ocean currents transport tiny particulate and dissolved organic matter to greater depths. Larger organic aggregates and faecal pellets sink. And daily and seasonal animal migrations release waste products at depth.

Addressing these three questions will help to clarify what sets the balance between how much organic material is consumed in the twilight zone, restoring nutrients and sustaining the fish stock, and how much passes on to greater depths, sequestering carbon away from the atmosphere10. Only with this knowledge can the wider consequences of exploiting the region be predicted.

The following three steps will help in addressing these research priorities. They make use of a range of innovative tools and techniques.

Conduct a census. Organisms ranging from bacteria to large cetaceans need to be counted. Devices such as the Underwater Vision Profiler (UVP) can be deployed in the twilight zone to capture images of plankton that can be identified and counted using a web-based application known as EcoTaxa, which is linked to a taxonomic database containing roughly 100 million images of planktonic organisms and particles. A smaller version of the UVP can be attached to autonomous vehicles to extend sampling beyond the times and places that research vessels can visit. Larger organisms can be identified with short-range high-frequency acoustic sensors. When deployed at depth, these sensors can help sort fishes from siphonophores. DNA harvested from the environment can also be used to infer the identity and diversity of elusive or fragile animals, including large fishes, marine mammals such as beaked whales and gelatinous organisms. Any new approaches should be calibrated against conventional physical sampling methods and follow internationally recognized, standardized procedures.

Determine what is processing and consuming organic material. To do this, changes in the size, source and sinking speed of organic aggregates need to be observed in situ as the particles descend through the water column. This should be done mainly using optical sensors. The information gleaned could then be combined with simultaneous estimates of the abundance of zooplankton and fishes and the intensity of ocean mixing, to determine what is breaking up the aggregates and retaining them in the twilight zone11. A range of ‘omics’ approaches should be used to provide insight into how the associated organic material is being eaten by microorganisms12, including metagenomics, metatranscriptomics and metabarcodes.

Track organic material. Argo floats already roam the ocean and collect information on properties such as temperature, phytoplankton abundance and nutrient levels as they shuttle between the surface and a depth of 2,000 metres every 10 days. Imaging systems capable of measuring the size and abundance of organic particles are being added to these floats. The current network needs to be increased from 200 to 1,000 operating floats, with imaging sensors added to all. Optical sensors on other autonomous underwater vehicles such as gliders can be used to yield information on the size and shape of organic particles.

These data could be combined with information from the Plankton, Aerosol, Cloud, ocean Ecosystem (PACE) mission, which NASA plans to launch in December 2022. The satellite will use a spectrometer to measure the colour of the ocean. Those data will be useful in determining the types of phytoplankton in the surface layer of the ocean, fuelling the twilight zone. The discovery that laser-mapping technology such as LIDAR (Light Detection and Ranging) can observe the daily migrations of zooplankton from space should be combined with sparse local data13.

To obtain the most complete picture possible of the global twilight zone, we call on national and international ocean projects to coordinate efforts, rather than duplicate them. We encourage researchers and institutions to link up with JETZON (Joint Exploration of the Twilight Zone Ocean Network), an initiative launched earlier this year to improve communication and coordination. Currently, 15 projects involving 12 countries are involved, each studying just a few locations. This is a good start. But given the vast size and complexity of the twilight zone, everyone, from independent researchers to international projects, needs to join forces to succeed.

There is no time to waste. We cannot let climate warming and human exploitation fundamentally alter the twilight zone before we even begin to understand the potential consequences for the health of the planet.

The Link Between Climate Change and Biodiversity.