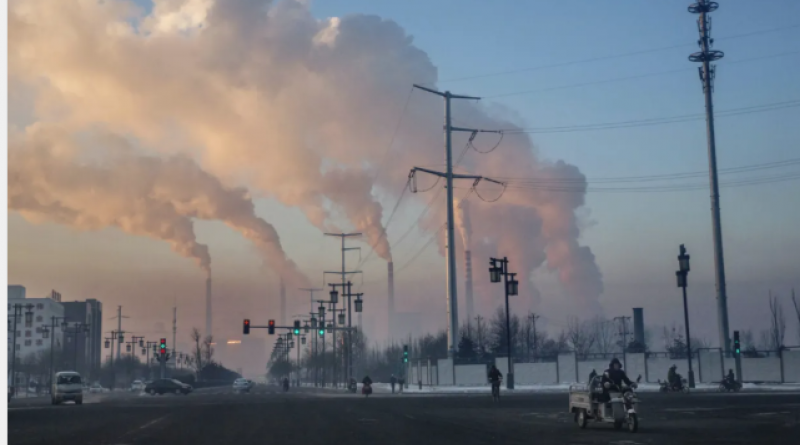 Even after the world's largest economies adopted the landmark Paris agreement to tackle the climate crisis in late 2015, governments continued to pour $77 billion a year in public finance into propping up the fossil fuel industry, according to a report released Wednesday.

The new report, from Oil Change International and Friends of the Earth (FOE) U.S., focuses on financing for oil, gas, and coal projects from members of the Group of 20 (G20), which comprises governments and central bank governors from 19 countries and the European Union.

Although U.S. President Donald Trump began the one-year withdrawal process for ditching the Paris accord in November 2019 after years of threats, other G20 nations remain committed to the agreement, which aims to keep global temperature rise well below 2°C (35.6 F) and further limit it to 1.5°C (34.7 F) by 2100.

Despite their public commitments to the Paris agreement, "G20 countries continue to subsidize the fossil fuel industry even as it makes bad business decisions that hurt people and the planet," FOE U.S. senior international policy analyst Kate DeAngelis said in a statement.

"Our planet is hurtling towards climate catastrophe and these countries are pouring gasoline on the fire to the tune of billions," she said. "We must hold G20 governments accountable for their promises to move countries toward clean energy. They have an opportunity to reflect and change their financing so that it supports clean energy solutions that will not exacerbate bad health outcomes and put workers at greater risk."

The new report—Still Digging: G20 Governments Continue to Finance the Climate Crisis (pdf)—warns that "with the health and livelihoods of billions at immediate risk from Covid-19, governments around the world are preparing public spending packages of a magnitude they previously deemed unthinkable."

In normal times, development finance institutions (DFIs), export credit agencies (ECAs), and multilateral development banks (MDBs) already had an outsized impact on the overall energy landscape and more capacity than their private sector peers to act on the climate crisis. In the current moment, their potential influence has multiplied, and it is imperative that they change course. The fossil fuel sector was showing long-term signs of systemic decline before Covid-19 and has been quick to seize on this crisis with requests for massive subsidies and bailouts. We cannot afford for the wave of public finance that is being prepared for relief and recovery efforts to prop up the fossil fuel industry as it has in the past. Business as usual would exacerbate the next crisis—the climate crisis—that is already on our doorstep.

As Oil Change International research analyst Bronwen Tucker put it: "Fossil fuel corporations know their days are numbered. Their lobbyists are using the Covid-19 crisis as cover to try to secure the massive new government handouts they need to survive."

"Government money must instead support a just transition from fossil fuels that protects workers, communities, and the climate—both at home and beyond their borders," said Tucker. "Instead of bankrolling another major crisis—climate change—our governments should invest in a resilient future."

Based on information from Oil Change International's Shift the Subsidies database, the report details financing from public institutions controlled by G20 governments—DFIs, ECAs, and MDBs. Key findings include that support for the fossil fuel industry has "stayed steady" since the Paris agreement and ECAs are "the worst public finance actors."

"Most of this fossil fuel finance flowed to wealthier countries," the report says, noting that China, Canada, Japan, and Korea provided the most public finance for dirty energy projects from 2016 to 2018.

Still Digging examines just one way these nations support planet-wrecking oil, gas, and coal projects, acknowledging that "unlike the 2017 version of this report, Talk is Cheap, it does not include public finance directly from G20 government departments due to a gross lack of transparency."

The report also doesn't cover "majority government-owned banks without a clear policy mandate, sovereign wealth funds, or public finance institutions with subnational governance," or "subsidies to fossil fuel production at the national level in G20 state budgets, which previous analysis has indicated may provide an additional $80 billion per year in support to fossil fuel production."

However, Still Digging suggests that G20 public finance institutions—as entities owned by governments party to the Paris accord—could be catalysts for more climate-friendly financing decisions "due to their economic and political power."

"Private and public financial investors alike will need to shift rapidly," the report says, "but the role of public institutions is unique because of both their outsized influence on energy finance and their capacity and mandate to lead on climate action."

More than 30 groups from across the globe endorsed the report—including Justica Ambiental, or FOE Mozambique, which has worked to raise alarm about international public finance supporting the expansion of liquefied natural gas (LNG) in southern African country.

"It is unacceptable that such a high investment, which will provide billions of profits for foreign companies like Total, is contributing to the impoverishment and oppression of already vulnerable local communities," said Justica Ambiental director Anabela Lemos.

"Peasant and fishing families have lost their livelihoods for a lifetime," Lemos added. "The discovery of gas has stolen their identity and failed to provide them with the conditions stipulated in the so-called community consultation processes."