Kenya warms to the water hyacinth as wonder source of biofuel. 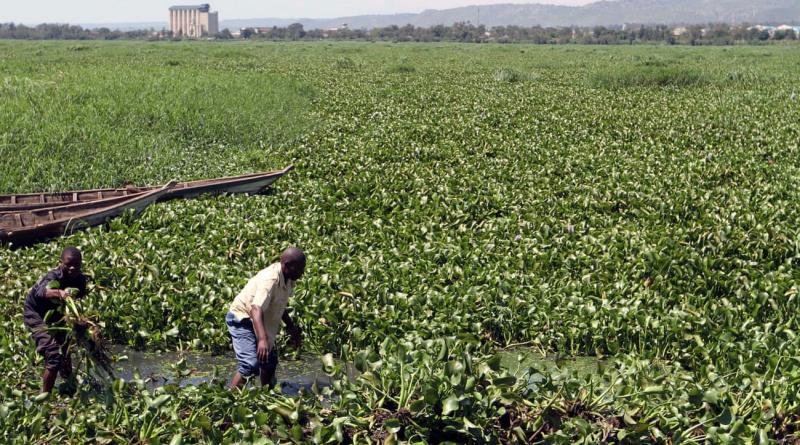 It is 9am on the shores of Lake Victoria’s Winam Gulf in Kenya’s Kisumu county. Tourists are arriving on the beach in droves, preparing to spend the day sunbathing and taking boat rides. Behind them, enormous marabou storks on spindly grey legs are pacing the beach, waiting for scraps.

Nearby, a group of women scan the horizon, looking for the fishing boats that will soon arrive with their daily catch.

But there’s something else on the horizon too, a sheet of water hyacinth pulled over the surface of the lake. The leaves of the floating plant extending like an oversized green shag carpet, rolling gently in the wind.

“We hope that the boats arrive before the hyacinth covers this area, [because] it will be difficult for [the fishermen] to access the dry land and bring us fish,” says Elizabeth Keita, a fishmonger in the village of Dunga, as she eyes the bobbing green sheet in the distance.

Water hyacinth (Eichhornia crassipes), an aquatic plant native to South America, first appeared in countries inAfrica in the early 1900s. Scientists there dubbed it the “world’s worst aquatic weed”, after it spread from the Cape in the early 1900s and started clogging up major dams and rivers.

In east Africa, the nefarious invader arrived with Belgian colonists in Rwanda, who liked the look of its glossy leaves and delicate purple flowers floating in their garden ponds.

But by the 1980s, it had slipped out of Rwanda via the Kagera river and made its way downstream to Lake Victoria.

There, with no natural predators and perfect temperature conditions, the plant began gobbling up open space, choking off fishing routes and providing a new habitat for disease-carrying mosquitoes. But for women like Keita, it has meant dwindling income, as the boats that once brought silver lake fish to shore by the hundreds struggled to navigate the clogged waters.

But water hyacinth isn’t her only headache. Like most women here, to smoke the fish she buys, Keita must gather huge quantities of firewood, sometimes walking as far as 10km each way to collect enough kindling to complete her work. And each day as she cooks, she breathes in the thick, grey woodfire smoke.

“I have had chest complications a number of times in the last years,” says Keita, who is chairperson of the local fishmongers’ association.

About three out of four families in Kenya depend on wood or charcoal to cook their daily meals, and the rate is even higher in rural areas, Kenya’s latest demographic and health survey shows.

Using solid fuels like these for cooking increases indoor pollution. The World Health Organization estimates that about 14,300 Kenyans die annually from conditions linked to indoor air pollution – most of which is caused by cooking and heating sources, the most recent estimates released in 2009 show.

Outside Keita’s home on the shores of Lake Victoria, piles of cleared water hyacinth left to rot were a common site. But buried in those decaying waxy leaves was a renewable energy gold mine.

It turns out the floating plant isn’t just good at being abundant – its foliage also contains a high ratio of carbon to nitrogen. It’s a magic combination that has captivated researchers’ imaginations since as early as the 1980s when, across the world, they began to explore its potential as a biofuel. Just about 4kg of the dried plant was enough to cater for a large family’s daily energy needs, early research predicted.

In 2014, Nigerian academics announced they had got better yields of the gas when they mixed the plant with sanitised chicken manure. A few years later, Kenyan scientists confirmed what their Nigerian peers and others had already found: animal dung worked to power charge the process of converting the weed into gas. In India, scientists took this idea and ran with it, mixing water hyacinth with the more famous Cannabis sativa, the same family of plants that marijuana comes from, as a proposed answer for periodic shortages of cow dung.

In 2018, the technology came to Dunga promising a two-for-one solution to the dual menaces of the water hyacinth and dependence on firewood. The community received two donated biogas digesters – machines that would transform a mix of water hyacinth and cow dung into biogas for cooking, as well as material for other household tasks such as incubating chicks and purifying water.

The “digesters” work a bit like a stomach. Food goes in one end – think of it as a mouth – and over the next 20 to 30 days, it ferments and breaks down, giving off gas that comes out the other end. From there, the clean-burning gas is piped to the point of use, just like traditional domestic gas.

Currently, there are about 50 of these biogas digesters slated for Kenya. In Dunga, some are connected to multiple family stoves so that altogether they produce enough gas to serve about 60% of the village’s population.

Kenya’s Biogas International company installed the stoves in partnership with the pharmaceutical firm AstraZeneca and the University of Cambridge’s Institute for Sustainability.

The project will test whether biogas can provide an effective alternative to firewood and charcoal in rural Kenyan communities.

The programme is only months old but, anecdotally, it seems to be working. Keita says the members of her fishmongers’ association are already getting sick less often. And because they don’t have to devote hours a day to walking long distances to collect firewood, they’re making more money as well.

Kanyiva Muindi is an epidemiologist and air pollution research fellow at the African Population and Health Research Centre in Nairobi. She says families who switch to the smokeless cooking method could expect fewer respiratory issues and even some forms of cancer because where there’s smoke, there’s PAHs – polycyclic aromatic hydrocarbons, a carcinogen released during burning of certain materials such as wood, corn cobs or cow dung, researchers recently reported.

Women, young girls and children are particularly vulnerable because they spend so much time in the kitchen or outside over cooking fires. Worldwide, scientists are still exploring whether PAHs are linked to pockets of high rates of oesophageal cancer in the country.

How much better the biogas stoves will be for the community’s health still needs more research, says Dominic Kahumbu Wanjihia, Biogas International’s chief executive. But unless the price of the digesters drops, it’s pretty clear that most communities will never be able to afford the machines, which sell for about $750.

Kanyiva says affordability is a challenge worth addressing, given the huge health and environmental dangers posed by “dirty” fuels such as wood, charcoal and kerosene. If biogas could become affordable on a large scale, she says it “would be life-changing for millions on the African continent and beyond”.

For Keita, meanwhile, one unexpected benefit of the stoves has been the way they have changed her view of water hyacinth. For years, she had regarded it as little more than a menace. But now, she says, “the hyacinth is becoming a useful resource!”

Kenyan universities aim to be “greenest in the world”.